The new year is shaping up as a tricky one for defense investors. Defense stocks rode a wave of increased Pentagon spending to new highs over the last five years, but with that up-cycle showing signs of fatigue it is time to get picky about what stocks to buy.

The industry saw budgetary headwinds on the horizon, and most companies are well-positioned to survive a change in sentiment coming out of Washington. But with the U.S. government the primary customer, there's limits on what large prime contractors can do other than ride out the storm.

L3Harris Technologies (NYSE:LHX) appears uniquely well-positioned to continue to grow no matter what happens to spending in the years to come. Here's why this under-appreciated defense company is tops on my radar right now.

L3Harris was formed from the June 2019 merger of Harris Corp. and L3 Technologies, two mid-tier defense contractors that together now have the heft to explore new opportunities and the resources to spread their business globally. 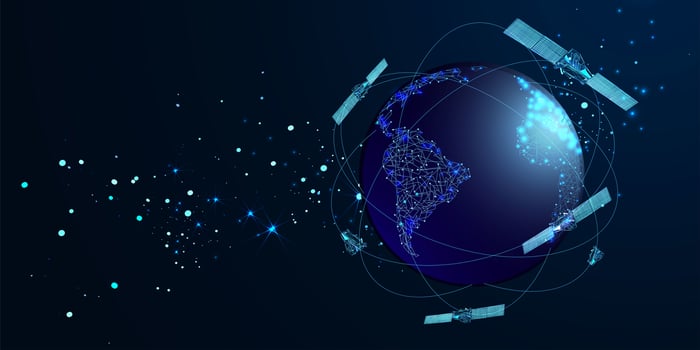 The merger integration is still ongoing, including the divestiture of businesses no longer deemed as vital, but the company appears to be getting the desired results. L3Harris claims it has won 25 awards with a cumulative value of $300 million that neither company could have bid for on its own. One example is a Space Development Agency deal that combined Harris' space payload expertise with L3's onboard space electronics.

L3Harris has a heavy emphasis on defense electronics and communications systems. That's not as glamorous as building tanks or fighter jets, but in an increasingly digital world where espionage and counterespionage is critical, it is very important to the Pentagon. About 20% of the company's total revenue is on classified projects, many in space.

The company in its third quarter earnings review said it expects "mid-single-digit" revenue growth in both 2021 and 2022, which would be strong performance in what is expected to be a tight Pentagon budgeting period. By comparison, two of the largest defense contractors, Lockheed Martin and Northrop Grumman, guided for sales growth of 3% and 4%, respectively, in 2021.

Plenty of cash for shareholders

L3Harris has a backlog of about $20 billion in future sales, and a pipeline of $69 billion as of the end of the third quarter. About $20 billion of that pipeline is international, an area where L3Harris post-merger is hoping to use its added scale to expand. The company currently generates about 20% of its sales outside of the U.S., but management has targeted bringing that total to closer to 25% over the next several years.

L3Harris in late October boosted its outlook for full year 2020 margins by 25 basis points to 17.75%, despite COVID-19-related expenses, and management expects that number to get closer to 20% in the years to come.

Management expects to return 100% of free cash flow to shareholders, including divestiture proceeds. The company expects to do about $2.2 billion in buybacks this year, and should generate $3 billion in annual free cash flow by 2022. That leaves plenty of room to keep repurchasing shares and grow a dividend currently paying about 1.8%, which I expect to be announced in early 2021.

Given L3Harris' stability and the search for yields in a low interest rate environment, a major dividend boost could be a catalyst to increase interest in the shares.

As noted, L3Harris isn't a major platform company, which means it isn't responsible for building the fighters, bombers, and warships considered vital to the nation's defense. Some of L3's key products, items like night vision equipment and upgraded communications systems, are arguably more discretionary than a new aircraft carrier, and are much easier orders to trim.

It's possible budget pressures could temporarily stall growth plans, but communications modernization is an ongoing need inside the Pentagon and demand should be there in time. L3Harris also has a growing international customer list to sell to, in particular U.S. allies eager to easily sync with U.S. systems. And its classified space business should see steady growth even in a tight budget.

There is also some risk in the planned CEO transition from Bill Brown to current Chief Operating Officer Chris Kubasik. But Kubasik has previous CEO experience at pre-merger L3, and the transition has been planned since the merger was announced, so there has been ample time to prepare.

L3Harris isn't a cheap stock, trading at an enterprise value 16 times earnings before interest, taxes, depreciation, and amortization (EBITDA) and at 19 times free cash flow. That's a premium to many of the other primes. 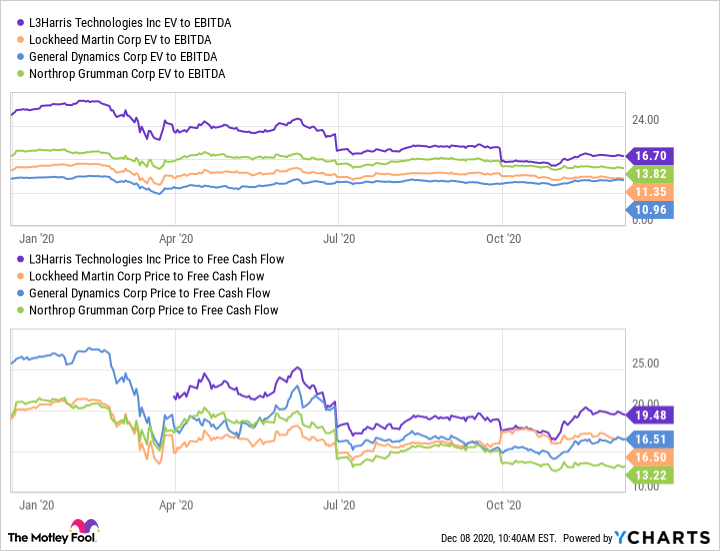 But L3Harris is well-positioned to expand into that valuation, with sales growth that should exceed most in the industry. As the company puts the finishing touches on merger integration and begins to better tap international markets, margins and free cash flow should improve. That, along with a potential dividend boost, should help the stock show up on more radar screens.

In an uncertain time for defense stocks, L3Harris offers a clearer growth story than most primes. It's my top pick for someone looking to invest in defense hardware businesses today.