According to a report published Friday by Bloomberg that cited "people familiar with the matter," Comcast (NASDAQ:CMCSA) might put most episodes of The Office behind a $5 per month paywall.

Currently airing on Netflix (NASDAQ:NFLX) in reruns, The Office was a half-hour comedy TV show that began on Comcast's NBC in 2005 and ended its run in 2013. Set in the headquarters of a fictional paper company in Scranton, Pennsylvania, and adapted from the British series of the same name, it starred Steve Carell as a clueless boss attempting to manage an oddball set of employees.

According to Bloomberg, it is currently one of the most popular shows on Netflix. 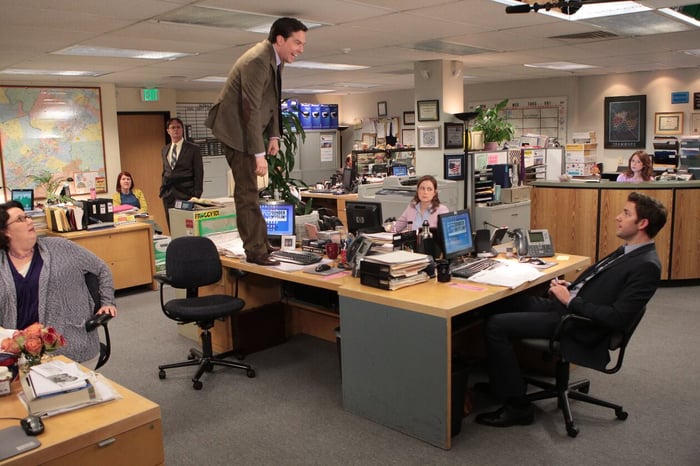 At the moment, the plan is for The Office to fly to Peacock, Comcast's recently launched (and popular) streaming service. It will migrate there from Netflix on New Year's Day. Even though the show originated on NBC, the network has agreed to pay $100 million per year for the rebroadcast rights. It plans to hype the arrival of the series on Peacock. This might be a tougher sell with some form of paywall.

According to Bloomberg, several scenarios are being considered. One is a "freemium" model, in which early episodes of the show would stream without charge (Peacock, in contrast to Netflix and most other streamers, does not charge its users a subscription fee for basic service). Most of the later episodes would then reside on the other side of that paywall.

Comcast/NBC has not made any official statement on the possibility of a paywall for The Office. On Friday, the company's stock rose by 0.9%, in contrast to the marginal fall of the S&P 500 index.