Please ensure Javascript is enabled for purposes of website accessibility
Free Article Join Over 1 Million Premium Members And Get More In-Depth Stock Guidance and Research
By Adria Cimino - Dec 11, 2020 at 6:45AM

This year's most successful investors started 2020 with small-cap healthcare holdings. In many cases, this meant betting on companies that hadn't yet brought products to market. In others, the bet was on commercial stage players -- but ones that still hadn't reached profitability.

In barely 12 months, many of these businesses bloomed into mid-cap companies, with market values of more than $2 billion. Shares of this year's best performer surged as much as 32-fold.

It may be no surprise to you that a few of those in this list are involved in coronavirus work. That was one of the most dominant themes of the year, after all. But a couple of surprises populate this list too. Let's take a look at which healthcare companies boosted portfolios the most -- and why. 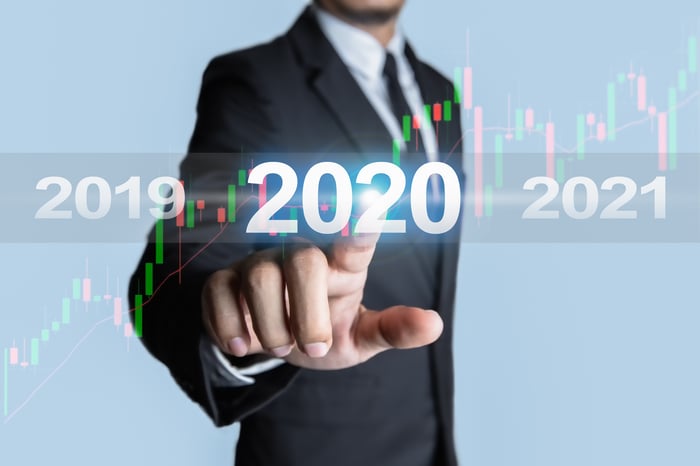 Novavax ( NVAX 5.02% ) isn't only the best-performing mid-cap healthcare stock this year. It's also the best-performing stock, period -- all industries and market values included. The stock began rising this spring when the company announced its work on an investigational coronavirus vaccine.

But the shares really took off in July, when Operation Warp Speed (OWS) offered Novavax $1.6 billion in funding for its program. At the time, it was OWS's biggest award yet. OWS is a U.S. government effort to speed a vaccine to market. The stock since pared some gains. But it's now heading higher once again as investors await interim data in the first quarter from its phase 3 coronavirus vaccine trial.. It's also preparing to file for regulatory approval of its flu vaccine candidate NanoFlu, which investors are hopeful about given its promising phase 3 data released in March.

Like bigger, more advanced rivals Moderna ( MRNA -4.03% ) and Pfizer ( PFE 3.17% ), Arcturus is working on a potential vaccine based on mRNA technology. That's why later-stage data reports from those rivals also boosted Arcturus shares. In recent weeks, Moderna and Pfizer said their vaccine candidates' efficacy was 94.1% and 95%, respectively. Investors were hopeful that Arcturus eventually may report similar findings. But why are investors so excited about a later-to-market option from a smaller company? Because Arcturus's vaccine candidate involves one dose -- while Moderna's and Pfizer's require two.

Most of Seres Therapeutics' ( MCRB 15.99% ) dramatic gains came after the company reported positive phase 3 data for its investigational product for recurrent C. difficile infection (CDI). Seres's product candidates involve an association of bacteria to modify the microbes in the gut to prevent and treat illness.

In August, Seres said its C. difficile candidate met its primary endpoint with a more than 30% reduction in CDI recurrence compared to placebo. This is significant because it means the company's first commercialized product may be on the horizon. And it validates the microbiome approach used in all of the company's candidates. Seres's trial included 182 patients. The company continues to enroll in a second study to reach the FDA's standard safety requirement of 300 patients treated. After that point, Seres will file for approval.

Twist Bioscience's ( TWST 0.01% ) sales of its next-generation sequencing (NGS) products and synthetic biologics such as synthetic DNA made this a high-growth year. Overall orders received reached a record of nearly $117 million for the fiscal year -- and $42.7 million of that came in the fourth quarter. Total revenue for the year climbed 65% to more than $90 million year over year. Investors overlooked the deepening annual loss -- $139 million this year compared to $107 million in the previous fiscal year -- and focused on growth.

While coronavirus-related tools weren't the biggest revenue driver for Twist, they were likely the biggest share-price driver. The company sells several, including NGS panels to sequence the virus. It also sells synthetic SARS-CoV-2 RNA controls used to verify point-of-care diagnostic tests. And Twist's biopharma business is working on coronavirus treatment. The company has identified antibodies that, in preclinical studies, demonstrated the ability to neutralize the coronavirus.

Inovio Pharmaceuticals ( INO -2.19% ) drew attention in April when it became one of the first companies to launch a coronavirus vaccine candidate in human trials. The shares soared on optimism the company would be among the first to the finish line in the vaccine race too.

Investors who bought in January and sold their shares in mid-July benefited from a 757% increase. The stock has since pared gains. What's hurt Inovio? In its phase 1 clinical trial report, the company didn't release the detail most investors have been watching for: Neutralizing antibody levels in volunteers post-vaccination. These antibodies are key because they block infection. Inovio also faced a setback: In September, the FDA placed a partial clinical hold on phases 2 and 3. The regulatory agency had questions on the final trial stages and the device used to deliver Inovio's vaccine candidate.

Then, in November, the FDA lifted the hold on phase 2, allowing that part of the study to begin. That wasn't enough to lift the shares significantly, though. They've been trading in the same range of $10 to $12 since September. 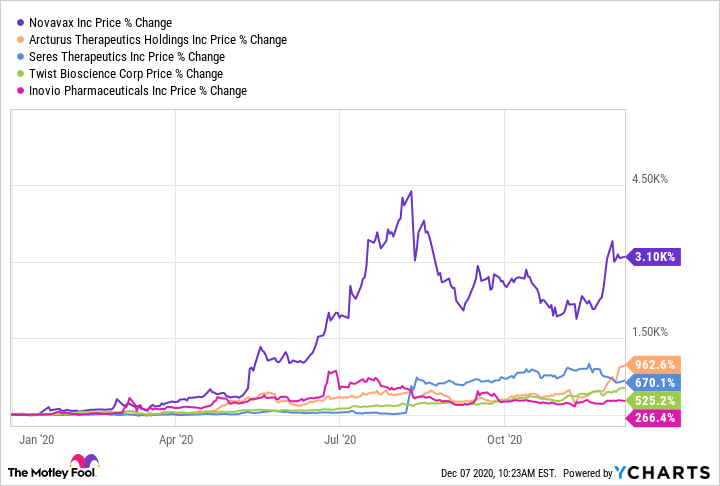 Now, the big question is whether these 2020 stars will continue heading skyward into the new year and beyond. Considering the rapidity, the extent of these astronomical gains, and that they were closely tied to the emergence of the COVID-19 pandemic, investors probably won't see the same dramatic spike from them next year.

That doesn't mean the positive share performance is over, though. As we head into 2021, investors should take a fresh look at these leaders. If they have growth drivers on the horizon, they still may make a solid investment into the future.

Why Novavax Was Wilting on Wednesday

Will Novavax Be Worth as Much as Moderna by 2025?