The rapid growth of renewables as an energy source has rightly caught investors' attention. Hydrogen fuel cells, in particular, have managed to garner phenomenal interest. Stocks of Plug Power (NASDAQ:PLUG), Bloom Energy (NYSE:BE), and FuelCell Energy (NASDAQ:FCEL) skyrocketed in 2020. However, there are several practical limitations in the growth of hydrogen fuel cells. By comparison, solar energy's prospects look far more promising. Let's look at why.

The rising interest in hydrogen fuel cells is premised on the fact that it is a cleaner and carbon-efficient source. While hydrogen derived from renewable sources indeed fulfills these criteria, it is not the case with hydrogen generated using fossil fuels. For perspective, nearly 95% of hydrogen produced in the U.S. is currently derived from natural gas. What's more, even fossil-fuel-based hydrogen isn't proving economically viable so far. Renewables-based hydrogen could cost twice as much or more to produce, making its economic viability a distant dream. Thus, the development of hydrogen as a fuel remains largely dependent on governmental incentives.

Meanwhile, the costs of lithium-ion batteries -- the most common storage technology currently -- have fallen by almost 90% in a decade. Thus, the need to develop hydrogen storage isn't as pressing for operators recently as far as economics is concerned.

Apart from costs, fuel cells face several other drawbacks. Hydrogen bonds with other elements easily. Isolating and storing it is an energy-consuming process. Fuel cells are currently far less energy efficient than batteries. Due to their combustible nature, hydrogen fuel-cells are also more dangerous.

On the flip side, fuel cells can be recharged faster compared to batteries. So, especially for large commercial vehicles such as trucks, fuel cell technology could be more promising.

Fuel cells are largely seen as a complementary technology for renewable energy generation in the future and could become the preferred choice in some niche segments. While the storage technologies continue to develop, solar is doing a great job on the generation front.

The solar market has already reached a scale where companies can operate profitably. Annual solar installations worldwide are estimated to exceed 160 gigawatts in 2021. Moreover, solar energy's growth is no longer limited to a handful of countries. As many as 20 countries (compared to six in 2016) could have more than 1 GW of annual solar demand by 2022.

A key factor contributing to solar energy's rapid growth is a huge potential market that is still largely unpenetrated. Only 2% of homes in the U.S. currently have solar installations.

Fuel cell versus solar: How companies have fared

What all of the above mean is that you as an investor will likely do better investing in solar stocks than in fuel cells stocks. Let's take a look at the kind of profits generated by fuel cell companies in the last few years. 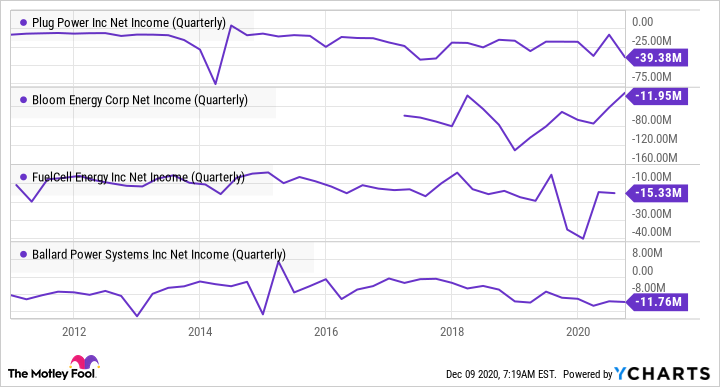 As the above graph shows, top fuel cell companies, including Plug Power, Bloom Energy, FuelCell Energy, and Ballard Power Systems (NASDAQ:BLDP), have all been generating losses in the past decade. Not much has changed to indicate that these will become profitable any time soon. By comparison, top solar stocks have been generating profits over the same period. 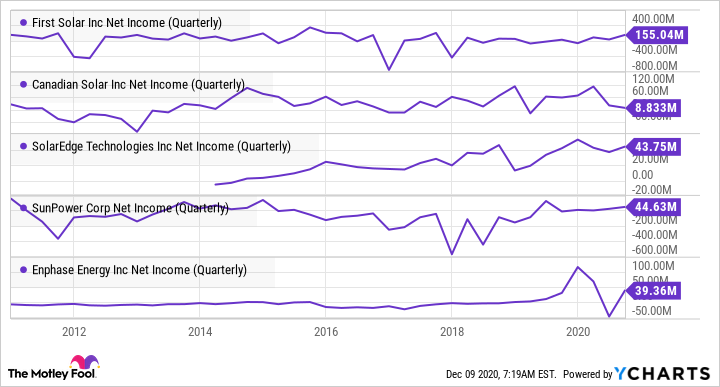 Enphase Energy has come a long way from its difficult position in 2016. The company posted impressive performance in the latest quarter. It is also on track to expand in the storage products segment. Though the stock looks a bit overvalued right now, it is one of the top solar stocks to buy for the long run.

SunPower's strategy of going capital-light by spinning off Maxeon Solar could pay off well. In addition to margin improvement, it will allow SunPower to focus on technology innovations. Additionally, SunPower can leverage its huge customer base to sell its storage products.