Please ensure Javascript is enabled for purposes of website accessibility
Free Article Join Over 1 Million Premium Members And Get More In-Depth Stock Guidance and Research
By Alex Carchidi - Dec 12, 2020 at 6:23AM

The market's mood changes on a dime, but your position in a stock doesn't have to.

If you had an eccentric friend with a reputation for impulsiveness and hyperbole, you'd definitely think twice before agreeing with their appraisal of their latest obsession, like the value of an up-and-coming stock. And in fact, as an investor, you do have this friend. If you're new to the game and don't know him yet, his name is Mr. Market.

Mr. Market is the personification of the market itself, and he provides a useful perspective by which to guide your investing. Some days, he gets hyper-excited about a stock and offers to sell it to you (or buy your shares) at prices that are far higher than a less mercurial analyst might calculate. Other days, he gets upset and completely loses hope in the same stock, offering to sell it for peanuts even if it's probably worth a bit more.

Thinking of the market as an overexcitable friend may seem silly, but it's an important reminder that your investing focus needs to be on the long term, rather than driven by day-to-day price movements. Understanding when, how, and whether to take advantage of Mr. Market's "moods" is key to excelling at investing. Let's get to know Mr. Market a bit better by seeing how he thinks about a hot stock like Moderna ( MRNA 11.79% ). 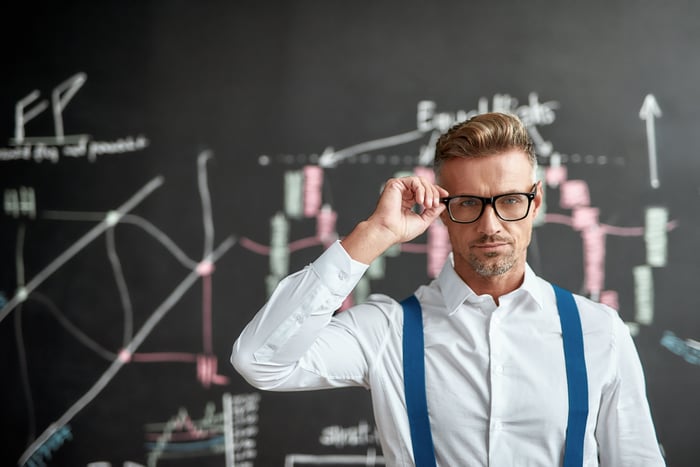 This year, Moderna's stock has ebbed and surged based on a combination of headlines about the coronavirus pandemic, press releases from the company and its competitors, and the market's overall level of volatility. Shares are up by more than 700% as of Dec. 10. But if you let Mr. Market dictate your position, you probably didn't experience these gains.

For instance, the company reported a slew of good news in May. First, it got regulatory clearance from the U.S. Food and Drug Administration for its coronavirus vaccine candidate to proceed to phase 2 of clinical trials, even as its phase 1 trials were still ongoing. Then, it received a fast-track designation from the FDA. A few days later, it announced positive preliminary data from phase 1 clinical trials. Mr. Market loved all of these developments, and he demanded a higher and higher price for the company's shares with each announcement.

There was just one problem: By the end of the month, there wasn't any more positive news left to report. With nothing to tickle his mania, Mr. Market soured on the stock, and share prices tumbled promptly, giving up most of the month's gain. It's important to point out that nothing had fundamentally changed about Moderna's ability to compete, nor had its chances of vaccine success diminished whatsoever during this contraction. But if you had taken Mr. Market's downtrodden mood as an indication that the stock's growth was finished and sold your shares, you'd have missed out on the majority of its expansion later in the year. 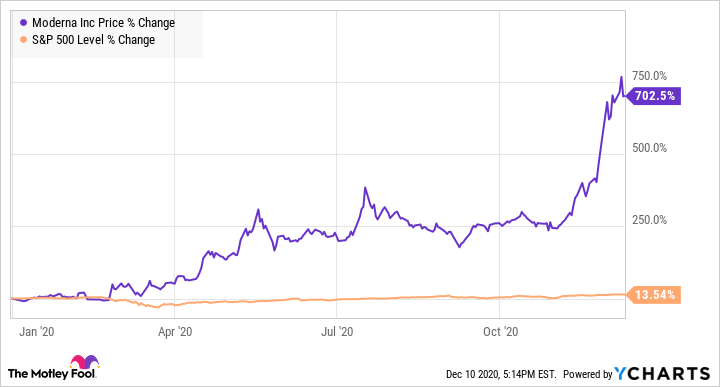 Investing wisely means ignoring Mr. Market most of the time

July saw Mr. Market go through another phase of Moderna obsession, followed shortly thereafter by another falling-out, and then another surge. If you take one thing away from this article, let it be this: The daily fluctuations of a stock's price do not match up perfectly with the stock's true value, nor do they predict its future on their own. For highly risky ventures like biotech companies, this is doubly true. Without new information of some kind, the public has no clue whether a company's medicines in development are coming along according to plan such that they will yield revenue, or whether they're doomed to become sunk costs.

Regardless of the reason, if your hyperbolic friend sours on a company and offers a lower price, remember that you aren't obligated to take the deal. He'll come back around tomorrow with a new price that might suit you better. Nor should you base your opinion on how much a share is worth entirely around that friend's latest offers. If you think that Moderna's shares are worth roughly $200 on the basis of your projections of its expected earnings, the fact that Mr. Market wants them for $160 today shouldn't change your opinion or prompt you to sell. Building this independence from his opinion is critical because it'll give you the fortitude to turn him down and keep your holdings for the long term, where you can find the largest growth.

With a company like Moderna, with several catalysts coming in the near future, investors should plan ahead for anything that might make Mr. Market's offers seem more tempting than usual. The biggest item on the horizon is the FDA's upcoming meeting to consider its vaccine for approval. Expect prices to surge in the days before the FDA meets and even further after their decision, assuming that the results are favorable and the vaccine is approved for sale. As always, investors who can ride out Mr. Market's moods for an even longer timespan could dwarf these gains. But, I won't blame you if you give into the temptation this time around.