Investing in biotech stocks is essentially a high risk/high reward game. It becomes riskier during times of market exuberance, when it's more difficult to identify the long-term winners and losers. This is one such time -- on Dec. 7, for the first time ever, the S&P 500 closed above the 3,700 mark. While most high-growth stocks are now quite expensive, there are still some great biotech stocks available at reasonable prices.

If you have $1,000 and the patience to wait for five years, then CRISPR Therapeutics (NASDAQ:CRSP) and Vertex Pharmaceuticals (NASDAQ:VRTX) could be the right stocks for you. All you need to do is buy and wait for the power of compounding to magnify your small investments in these stocks in the next five years. 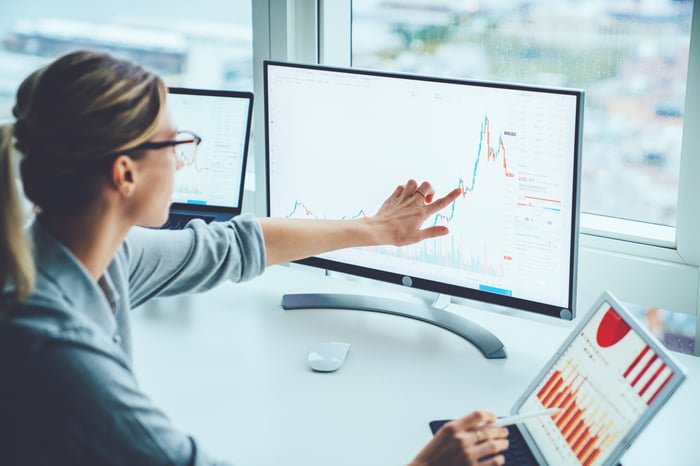 This clinical-stage gene-editing biotech is focused on developing therapies to cure a range of blood disorders and B-cell cancers. The company's flagship CRISPR-Cas9 gene-editing platform mimics the natural defense mechanism bacteria uses against viral infections to silence or correct faulty disease-causing genes in the body.

CRISPR has partnered with Vertex Pharmaceuticals to develop the gene therapy CTX001 for patients with two blood disorders called beta-thalassemia and sickle cell disease. These genetic conditions affect a patient's ability to produce enough functional hemoglobin. The companies have reported impressive results from early-stage trials, first in June and then additional positive data in December.

CRISPR is independently developing "off-the-shelf" cell therapies using allogenic chimeric antigen receptor T-cells (CAR-T) to cure B-cell cancers. If successful, the company will effectively revolutionize the CAR-T therapy space, since the current approved cell therapies are autologous -- meaning they have to be manufactured every time using a patient's own cells. Allogenic CAR-T therapies can be manufactured at mass scale and a much lower cost, which will increase their adoption by both providers and payers. CRISPR has already demonstrated clear anti-tumor activity for its leading allogenic CAR-T therapy, CTX110, in a phase 1 trial of patients with non-Hodgkin's lymphoma.

If future results from subsequent trials continue to be favorable, CTX110 is well-positioned to emerge as a major long-term revenue driver for CRISPR. Besides CTX110, the company also has two more investigational allogenic CAR-T therapies in the early-stage clinical pipeline: CTX120 targeting multiple myeloma, and CTX130 targeting lymphomas and kidney cancer.

However, there are few risks to consider before investing in this company. CRISPR does not yet have a recurring revenue source, is not profitable, and may not start raking in profits for at least a few years to come. Additionally, the death of a non-Hodgkin's lymphoma patient who was administered the highest dose of CTX110 in the CARBON trial highlighted the many challenges invoflved in developing safe gene therapies.

Despite these difficulties, the potential for gene editing to revolutionize the treatment of some chronic conditions is unrivaled. If the future readouts from CRISPR's pipeline help validate the CRISPR-Cas9 platform's safety and efficacy, it would in turn open up many new licensing and partnering opportunities. CRISPR has inked multiple drug development partnerships with Vertex Pharmaceuticals, which have fetched $77 million in revenue in the last 12 months. The company has a healthy balance sheet with $1.4 billion in cash and very little debt. CRISPR has the financial flexibility to fund its research programs for many more years to come. So it can prove to be an attractive investment for healthcare investors in the next five years.

For several years now, Vertex Pharmaceuticals has been dominating the treatment of cystic fibrosis (CF) with its arsenal of four drugs: Kalydeco, Orkambi, Symdeko/Symkevi, and Trikafta. CF is a potentially fatal lung condition that affects more than 70,000 people worldwide.

Approved by U.S. Food and Drug Administration in October 2019, Trikafta is a triple-combination therapy that can be used to treat almost 90% of the global CF population. Trikafta has emerged as a blockbuster therapy in a very short timespan since its U.S. market launch, with reported revenue close to $2.8 billion so far this year.

Vertex's financial performance this year has been nothing less than exceptional. Revenue was up by 66% year over year to $4.6 billion, while net income jumped by 118% to surpass $2 billion. The company has $6.2 billion in cash and cash equivalents and no debt on its balance sheet.

The successful U.S. commercial launch of Trikafta, which is currently used by 18,000 CF patients, has played a pivotal role in the company's financial performance. Vertex expects this growth trajectory to continue in coming quarters, especially since the European Commission approved Trikafta (marketed as Kaftrio) in August. The company is also working on launching Trikafta in other international markets such as Australia and Canada. A broader geographic market coupled with reimbursement expansion and label expansion of its CF franchise for children and infants could grow the company's addressable market size by more than 20,000 patients.

However, Vertex's share price is surprisingly up only 5% so far this year, while the S&P 500 has risen close to 15% in the same time frame. Concerns about Trikafta's slowing momentum in U.S., cannibalization of other CF drugs, and excessive reliance on its CF franchise are to blame for the stock's sluggish performance. The failure of the company's investigational alpha-1 antitrypsin deficiency asset, VX-814, in a phase 2 proof-of-concept study and the subsequent discontinuation of this program was a big jolt to the company's shareholders. However, a share price drop of over 20% after this clinical failure was definitely not warranted, considering the company's risk-reward proposition.

Vertex is currently trading at 9.9 times price-to-sales, which is quite cheap for a company with revenue growing over 60% year over year. Healthcare investors should consider buying this stock, especially at the current attractive valuation levels.

If You Have $1,000 and 5 Years to Wait, Buy These 2 Stocks Now @themotleyfool #stocks $CRSP $VRTX Next Article
Current