Please ensure Javascript is enabled for purposes of website accessibility
Free Article Join Over 1 Million Premium Members And Get More In-Depth Stock Guidance and Research
By Adam Levine-Weinberg - Dec 13, 2020 at 9:07AM

A surge in e-commerce demand has lifted Shopify stock to new heights this year. However, many of its customers are unlikely to be long-term retail winners.

The COVID-19 pandemic has devastated many businesses around the world. However, it has been a huge positive catalyst for Shopify ( SHOP 1.28% ). The pandemic forced retailers -- including many mom-and-pop stores -- to shift their focus to e-commerce. Shopify helped these businesses set up online stores so that they could continue generating revenue, even with little or no traffic to their physical stores. 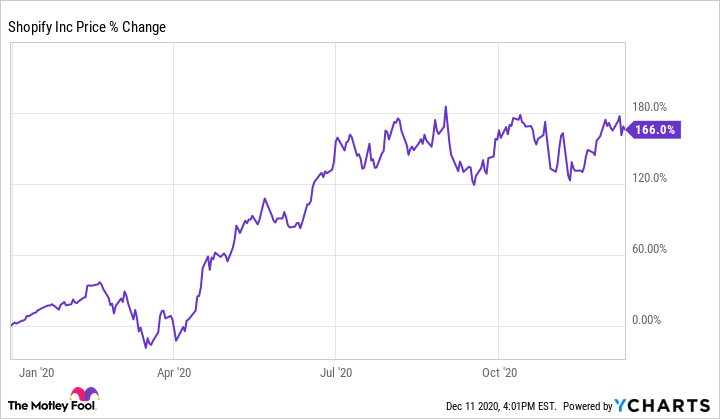 The pandemic-fueled rally in Shopify stock isn't likely to last, though. Shopify bulls appear to be overestimating the company's long-term growth and earnings prospects.

One of the biggest megatrends of the century is the transition of much of retail to e-commerce. That transition is still in the early innings. Last quarter, e-commerce accounted for just 14% of U.S. retail sales. It's not clear what the long-term balance between brick-and-mortar retail and e-commerce will be, but it will clearly involve more e-commerce than today. Shopify will benefit from this megatrend for many years to come.

However, a cross-cutting megatrend is far more troublesome for Shopify: the growing concentration of the retail industry. The top 10 U.S. retailers are on track to ring up at least $1.5 trillion of gross merchandise volume (GMV) this year. (The total GMV of all retailers with over $10 billion of domestic sales will easily exceed $2 trillion.) For comparison, U.S. retail sales will likely wind up near $4 trillion this year, excluding auto and gasoline sales.

Amazon.com ( AMZN 1.11% ) is virtually certain to increase its already-high market share significantly over the next decade. Investors are also pricing shares of big-box retail giants like Walmart, Target, Costco Wholesale, and even Best Buy for significant future growth. Based on their low costs, broad store networks, and omnichannel offerings, it seems like a good bet that this expected growth will pan out. 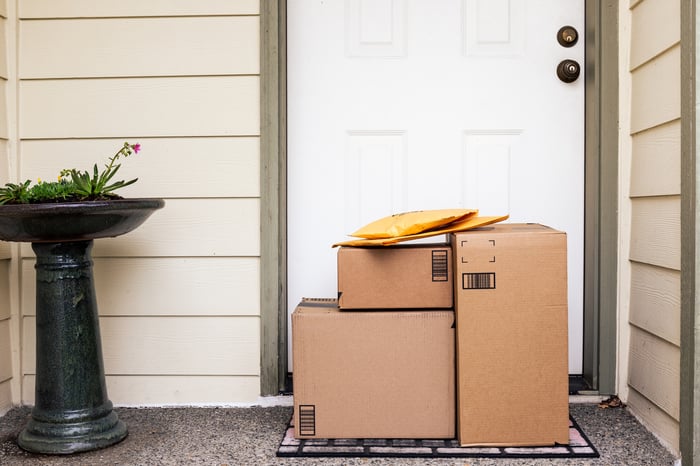 A lot of Shopify's 2020 growth has come from helping smaller merchants make the transition to e-commerce. The risk is that in many cases, this may be a last-ditch attempt to stay in business -- one that ultimately fails as Amazon and other megaretailers continue steamrolling less efficient competitors.

Shopify does offer tools to help merchants on its platform sell through Amazon as well. In theory, that means Shopify could participate partially in Amazon's rapid GMV growth. However, as Amazon becomes increasingly dominant in the U.S. retail landscape, merchants may find that virtually all of their sales come from that channel, reducing the value of Shopify's services.

Shopify has reported incredible results in 2020. Last quarter, revenue surged 96% on a 109% increase in GMV. That helped Shopify swing to a profit after losing money in the prior-year period. Revenue is on track to reach nearly $3 billion this year, and analysts expect Shopify to add almost $1 billion to its top line in 2021. Jefferies analyst Samad Samana thinks revenue could surge to $10 billion by 2025. Yet even if Shopify lives up to that aggressive forecast, it might not lift Shopify stock.

Shopify's investments in areas like robotics and fulfillment make sense. But as lower-margin revenue streams become an even bigger proportion of the business, Shopify's revenue multiple is likely to shrink significantly. Later on, as the business matures and growth slows, its multiple is bound to contract even further.

Shopify stock has flown too high

When Shopify finally reaches maturity, many years down the road, it will probably merit a modest revenue multiple of around three times sales. (Oracle -- a mature software company with extremely high margins -- trades for less than five times sales.) Even if Shopify were to grow revenue at a 20% compound annual growth rate over the next two decades to around $100 billion by 2040, the company's market cap would be just $300 billion at that valuation: only 135% above its current level.

Moreover, I suspect that Shopify's long-term revenue opportunity is even lower. Over the next decade, the percentage of retail sales going to massive corporations with over $10 billion of annual sales will continue rising. Unless Shopify can convince some of the largest retailers in the world to adopt its platform, it is ultimately playing in a shrinking market: one that isn't big enough to justify Shopify stock's lofty valuation.