Investors have a lot to smile about as 2020 comes to a close. After a brutal spring sell-off, all the major indexes have come roaring back. Even the downtrodden energy sector is starting to catch fire. Believe it or not, it's up 41% in the past month, outperforming the S&P 500's 5.5% gain.

Array Technologies (NASDAQ:ARRY), Enbridge (NYSE:ENB), and Kinder Morgan (NYSE:KMI) are three candidates for folks looking to restructure their portfolios for 2021 -- or anyone looking to ride the energy rebound higher. Here's why all three are great buys right now. 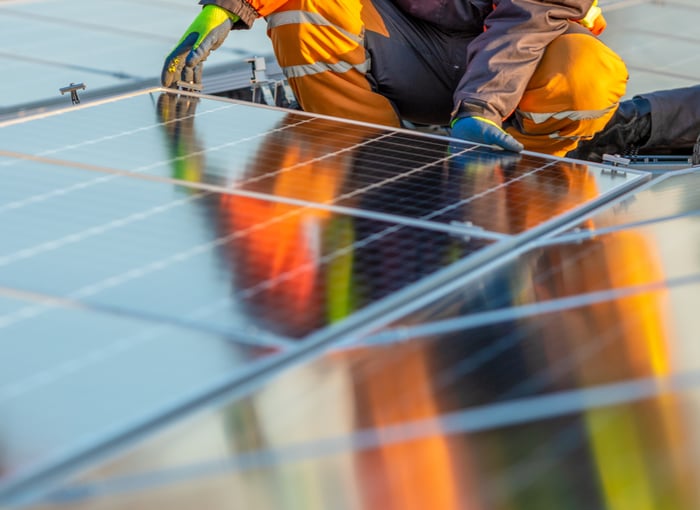 After going public on Oct. 15, Array Technologies has faced a relatively muted introduction to the public markets. Although Array has been around for 30 years and is a well-established software and component manufacturer in the solar industry, it isn't as well known as other notable IPOs such as Airbnb or DoorDash. And although Array is a prominent leader in its space, it's still just a $4.5 billion company -- which is much smaller than Airbnb's $88 billion valuation or DoorDash's $65 billion market capitalization. However, Array's smaller size in a booming solar market could give it more room to grow relative to these larger names.

In its first quarterly announcement as a public company, Array reported revenue of $692 million (up 64%) and adjusted EBITDA of $140 million (up 96%) for the nine months ended Sept. 30, 2020. The midpoint of its full-year guidance is $855 million in revenue and adjusted net income of $0.84 per share. At its current price of around $36.50 per share, Array would have a price-to-sales (P/S) ratio of 5.4 and a P/E ratio of 43.5, which is attractive for a recently listed growth stock. In fact, Array would have a lower P/S ratio and P/E ratio than the three largest solar stocks by market capitalization traded on the U.S. market. 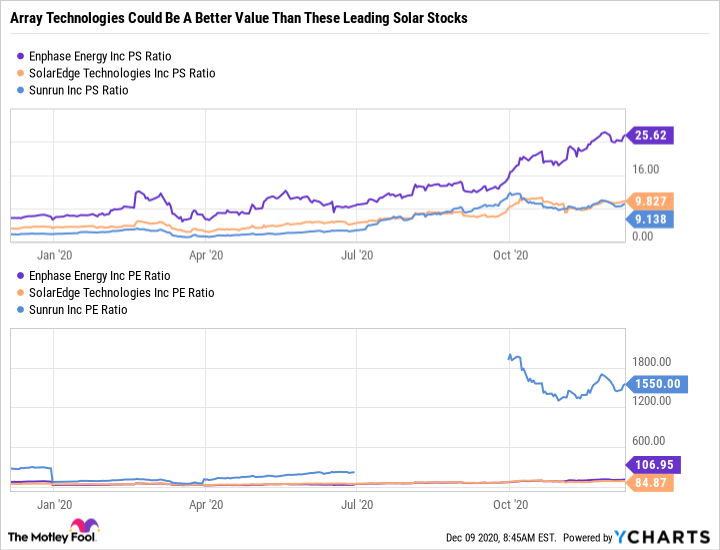 Array Technologies could undergo share price volatility until it proves it can succeed as a publicly traded company. Although the short term remains uncertain, this IPO stock seems to be one of the more fairly valued solar plays on the market today.

Enbridge is one of the largest oil and gas infrastructure companies in North America. In 2010, it was generating about 65% of its distributable cash flow (DCF) from oil liquids, and 33% from natural gas transmission, distribution, and storage. Today, the company generates just over half of its DCF from liquids pipelines, 42% from natural gas assets, and 5% from mostly renewable power and energy services. 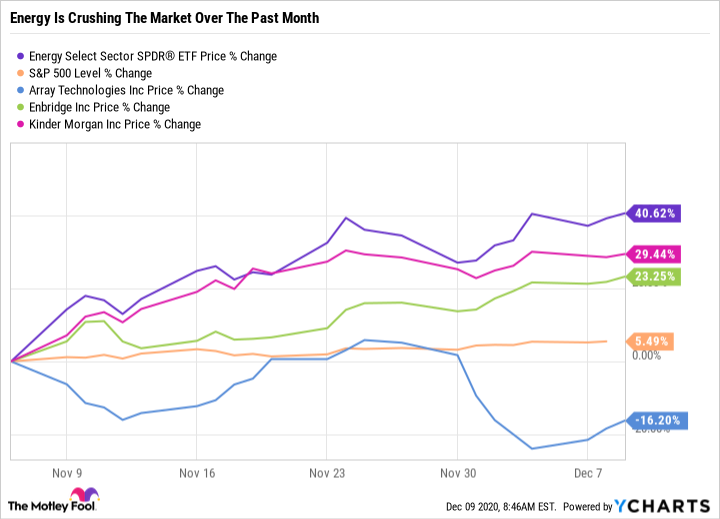 The Enbridge of today secures 98% of its DCF from long-term contracts. This gives the company predictable earnings and DCF to support its dividend, which yields an impressive 7.5%. However, Enbridge recognizes that it can't solely grow its oil infrastructure if oil growth stagnates. The company believes the 2040 global economy will rely on oil for the majority of transportation demand and heavy ground and marine transportation. It sees natural gas becoming the dominant global fuel source, acting as the backbone of industrial processes and power generation. And finally, it sees offshore wind and solar accelerating -- encouraged by government policy, subsidies, and ESG investing.

As a result of these predictions, Enbridge plans to ramp up its renewable spending. The game plan is to support its dividend and existing and ongoing oil and gas operations with DCF and then use any extra cash, and likely debt, to invest in a slew of renewable projects. Renewables have yet to meaningfully contribute to the company's top or bottom line. The profitability of these projects remains to be seen. However, management noted during its third-quarter conference call that it feels renewable projects, even offshore wind projects, are becoming competitive due to the scale of the projects and the sophistication of the equipment being used.

Unlike Enbridge, which sees the disadvantages of liquids pipelines, Kinder Morgan is perfectly content with its natural gas infrastructure portfolio. The company is one of the biggest natural gas pipeline, transmission, and storage operators in North America. Similar to Enbridge, it generates the majority of its DCF from predictable long-term contracts.

Kinder Morgan is focused on sustaining and growing its dividend and generating free cash flow (FCF). It's less inclined to integrate renewables into its portfolio. Kinder Morgan believes in the relevance of natural gas as a domestic fuel source and an export in the form of liquefied natural gas (LNG).

Kinder Morgan's investments primarily consist of pipelines that support higher U.S. natural gas production and LNG projects that support higher U.S. LNG exports. Two key examples are these investments are its nearly completed Permian Highway Pipeline (PHP) project and the Elba Liquefaction project. The PHP will be one of the largest natural gas pipelines to connect the Permian Basin of West Texas to export terminals along the Gulf Coast. The Elba Liquefaction Project is located just off Savannah, Georgia, to support shipments of U.S. LNG to buyers overseas.

Kinder Morgan yields 7.1% and is supporting its dividend with FCF. Despite the difficult business climate, the company has generated impressive earnings so far this year.

Recently listed Array Technologies exposes investors to the tailwinds of the solar sector at a lower valuation than the industry's leaders. Enbridge and Kinder Morgan are two solid dividend stocks with different long-term plans. As a group, these three energy stocks should give investors a little bit of everything to hit the new year in stride.