Shares of Carnival Corporation (NYSE:CCL) (NYSE:CUK) jumped 6.7% in early morning trading Monday before retreating to just a 2.1% gain as of 10:30 a.m. EST.

The cruise line stock announced this morning that its Seabourn ultra-luxury brand will conduct 18 seven-day voyages between Vancouver, Canada, and Juneau, Alaska, between May and September 2021, "taking guests to the region's most popular destinations." 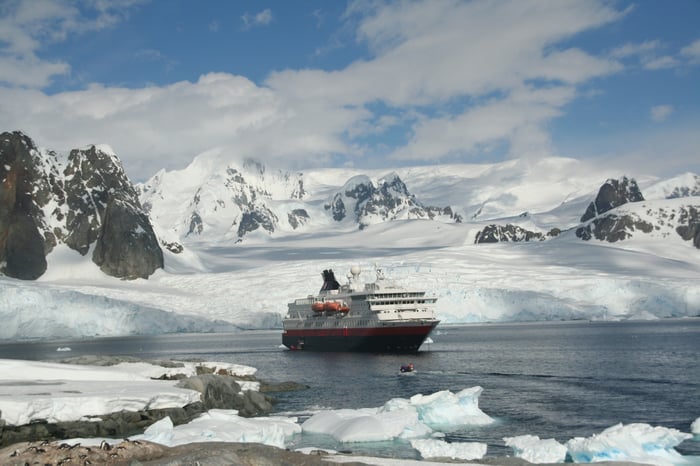 Carnival's announcement comes on the heels of the U.S. Food and Drug Administration's decision late Friday to give Emergency Use Authorization for the BNT162b2 coronavirus vaccine developed by Pfizer and BioNTech, which permits the immediate distribution and administration of the vaccine in the United States.

Carnival's announcement also tracks the requirements of the U.S. Centers for Disease Control "Framework for Resuming Cruise Ship Operations," which dictates, among other rules, that once cruising resumes, cruises initially be limited to no longer than seven days' duration.

Just one single Seabourn vessel, the Seabourn Odyssey, will conduct the cruises in question. The first cruise to depart from Vancouver, British Columbia, will begin May 28, 2021, and the schedule runs through a final cruise completing on Sept. 17, 2021.

Seabourn -- and by extension Carnival -- is just dipping its toes back into the cruise market with this announcement. Between the limited duration of the cruises, their limited number, and the presumably limited number of passengers who will be on board these cruises, today's announcement won't create much in the way of revenue for Carnival next year. But it is a start, and should help to serve as a trial run before Carnival opens up cruising across its other brands and other ships as the vaccines continue to roll out throughout next year.

As such, it's a step in the right direction, and good news for Carnival stock.