Please ensure Javascript is enabled for purposes of website accessibility
Free Article Join Over 1 Million Premium Members And Get More In-Depth Stock Guidance and Research
By Chad Henage - Dec 15, 2020 at 7:46AM

The online giant has a three-pronged plan to disrupt drugstores.

Amazon.com ( AMZN -1.15% ) has been eyeing the prescription market since its acquisition of PillPack in 2018 -- and the online sales and services goliath sent shockwaves through the pharmacy industry this month as it launched Amazon Pharmacy. Since the pandemic began, shoppers have increasingly supplanted physical errands with online purchases. Removing a chore, eliminating exposure to other people, and providing an always-open pharmacy sounds like just what the doctor ordered for Amazon's future growth. 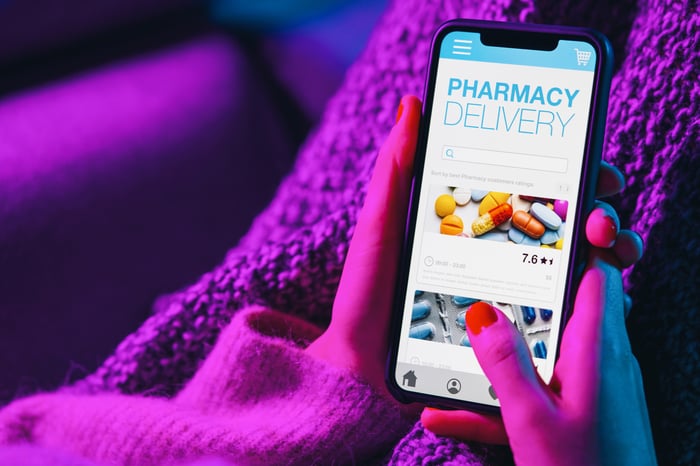 Let the pharmacy come to you

Amazon Pharmacy hopes to prove that the same approach that worked for selling books, and other items, will work for prescriptions too. It's pursuing a relatively simple model: Make refilling regular prescriptions easy, with clear pricing, and by mail.

Rather than making a trip to one of the thousands of physical pharmacies run by Amazon's competitors, customers can have their routine medications show up at their doorstep. Amazon Pharmacy customers who are also Amazon Prime members will even receive free two-day delivery.

According to Bank of America Securities, a mid-to-high teens percentage of prescriptions are fulfilled by mail. This statistic seems to suggest a significant runway for Amazon to capture market share. The company's hoping that fast shipping and online ordering will outweigh the convenience of the huge number of locations that entrenched pharmacies offer. One of the largest competitors in the pharmacy market is CVS Health (NYSE: CVS) which operates 9,900 retail locations. This sounds impressive, but it's not necessarily as big an advantage as you might think.

According to Thomas Sullivan, MD, writing in Medical Economics, 50% of patients with chronic conditions don't take their medicine as they should. Dr. Sullivan suggests that among other things, COVID-19 may be causing customers to delay or simply forget to pick up their prescriptions.

Going to a pharmacy means the risk of exposure to germs, potentially waiting in line, and worrying about whether the store is following proper protocols. Amazon's solution eliminates these issues. (Spurred by the pandemic, CVS and other pharmacies have begun to offer online orders and delivery as well.)

Since prescriptions are traditionally lightweight, easy to pack, and simple to ship, Amazon is taking on a logistics problem -- and few retailers are more efficient than Amazon. Effective operations and huge potential growth have been hallmarks of the Amazon story so far, and as it moves into pharmacy offerings, the company's aiming to continue that trend.

Amazon also hopes to make pharmacy pricing clearer by showing customers what they will pay before they checkout. Amazon Prime members will receive further discounts if they are paying without insurance. This strategy seems to directly address two big issues: the cost of prescriptions and the United States's growing uninsured population.

According to a study published in the National Library of Medicine, approximately 25% of older adults on a fixed income have delayed or not filled medications due to their high cost. In addition, the pandemic has cost millions of people their jobs and in theory their health insurance coverage. According to the Kaiser Family Foundation, in 2019 there were nearly 29 million non-elderly uninsured individuals. Amazon hopes to address these two populations directly.

Showing customers what they will pay before checkout, means avoiding the register sticker shock, and awkwardness, of being told by a pharmacist that their medication will be prohibitively expensive. Offering discounts to the tens of millions of people who may already be Prime members could help the uninsured population by providing prescription discounts.

Face to face (without the actual faces)

Third, Amazon Pharmacy promises customers will always be able to speak to a pharmacist. You'd think you could already do so in person at physical drugstores, yet that isn't always the case.

In chain stores like CVS or Walgreens Boots Alliance ( WBA 0.63% ) there may only be one trained pharmacist on duty at a time. According to The New York Times, many pharmacists at CVS and Walgreens describe their workplaces as understaffed. These pharmacists struggle to fill prescriptions, give flu shots, work the register, call doctors, and more.

Amazon Pharmacy offers a consultation with a pharmacist 24 hours a day, 7 days a week. Amazon pharmacists won't be dealing with ringing up one customer's purchases, while trying to answer questions, and also directing other staff. Perhaps you could get more personalized service at a small locally owned pharmacy -- but unlike Amazon, those aren't likely to be open 24 hours a day.

Amazon Pharmacy could be a happy hybrid, offering the one-on-one pharmacist interaction of a local store with the always-open availability of the larger chains.

With analysts calling for Amazon to generate total revenue for 2021 of nearly $450 billion, this massive company needs huge opportunities to make a dent in its performance. Given this backdrop, it makes sense for Amazon to target the global retail pharmacy market.

And even if Amazon merely remains at a 10% share of the pharmacy market, it could still enjoy incredible growth as that industry expands all on its own. The global pharmacy market is expected to generate more than $1 trillion in sales by 2023. .

The Amazon growth assumption above also leaves out two important considerations. First, Amazon Pharmacy could drive more customers to sign up for Amazon Prime because of the pharmacy-specific benefits. That would give Amazon both the pharmacy sale and subscription revenue from the annual Prime membership fee of $119. Second, the average Prime member spends about $1,400 with Amazon per year versus, about $600 for the non-Prime member, according to Business Insider. In short, Amazon Pharmacy could be a hook that creates many more loyal Prime members, who end up spending significantly more on everything Amazon can offer.

Amazon has a history of disrupting industries where no one thinks it will have a chance. Investors looking for the next great growth stock shouldn't overlook the online giant and its next potential growth phase.