Whether you're prioritizing a big yield, rapid dividend growth, or a combination of the two, the technology sector hosts stocks with characteristics that should appeal to a wide range of income-seeking investors. That wasn't always the case.

Read on for a look at three dividend-paying technology stocks that could make strong additions to your portfolio. 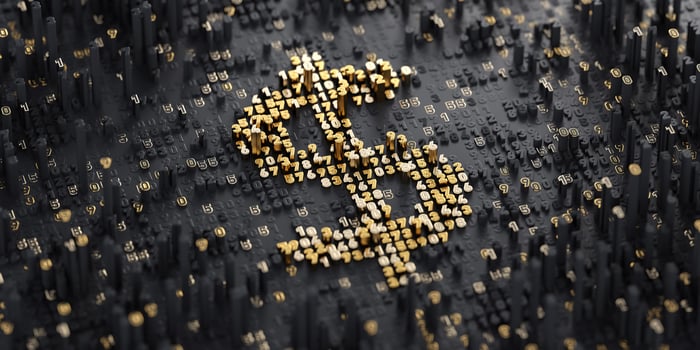 The telecommunications industry has become a go-to for income-focused investors, with many turning to names like AT&T and Verizon because they offer high yields and provide services that are central to the information age. Lumen Technologies (NYSE:LUMN), which was known as Century Link prior to a name change in February, has tended to attract less fanfare. However, the stock has a multitude of characteristics that are likely to delight dividend investors.

For one, Lumen's 9.8% yield is about as good as you're going to get for a telecom that has an encouraging long-term outlook. That level of payout might justifiably raise concerns about the stock being a yield trap, but that doesn't appear to be the case here.

The company's core revenue stream comes from its broadband internet services, and it appears to be on track for a turnaround as high-performance fiber service comes to make up a larger portion of its sales mix while the contribution from traditional copper-based broadband wanes. Lumen is also pursuing growth opportunities in edge computing and hybrid cloud services.

Declining revenue and the need to pay down debt did force Lumen to cut its dividend payout last year, but the company's sales appear to be stabilizing and the dividend looks very safe at current levels. The cost of covering its current payout comes in at roughly $1.1 billion, while the business generated approximately $2.8 billion in free cash flow over the trailing-12-month period. That leaves plenty of cash for Lumen to fund operations and continue paying down its debt load.

The company remains very profitable and is boosting margins by reducing operating expenses, and the fact that it's been largely overlooked could work to the advantage of investors. Shares look cheaply valued, trading at roughly seven times this year's expected earnings.

Avago acquired Broadcom (NASDAQ:AVGO) in a $37 billion deal and began operating under the latter company's name in 2016. The semiconductor giant continued to make a big acquisitions push in subsequent years, but much of its spending was focused on adding new units that could bolster the company's position in the software space. Solid performance for the company's core semiconductor business combined with a surge of new cash flow contributed by businesses that it had acquired has allowed Broadcom to deliver stellar payout growth in recent years. 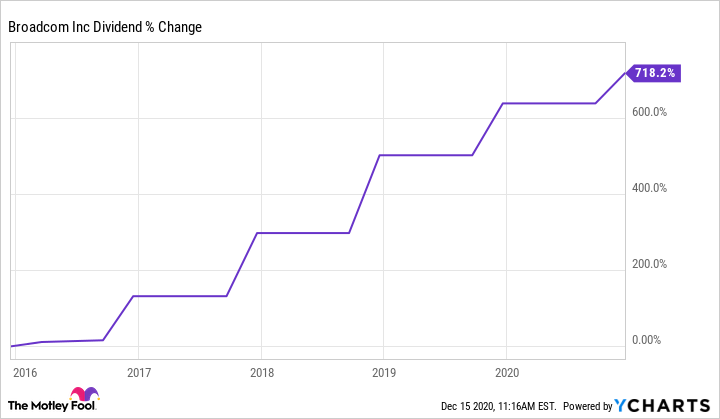 Don't be surprised if the pace of dividend payout growth slows over the next five years, but it looks like the company should be able to continue delivering substantial growth all the same. Shares already yield roughly 3.3% at current prices, so it's not as though investors will have to wait for the stock to grow into posting a hefty payout. There are positive catalysts for the company's share price on the horizon as well.

With 5G network availability starting to expand and compatible hardware requiring a greater number of high-performance chips, Broadcom's network connectivity hardware should get a boost. The Internet of Things trend also suggests that there will be big growth in the number of connected devices and sensors. The strong outlook in the hardware space is complimented by tailwinds like rising demand for infrastructure software and cybersecurity services. Altogether, Broadcom's hot streak looks poised to continue, and its shares offer an attractive combination of yield and dividend growth potential.

With a yield of roughly 0.5%, most investors won't be buying Activision Blizzard (NASDAQ:ATVI) stock for the dividend it's paying today. The company's strong portfolio of video game franchises and an encouraging long-term growth outlook for the interactive entertainment industry are much more likely to entice investors. On the other hand, Activision Blizzard does stand out as an appealing dividend growth stock.

The company has increased its payout on an annual basis since 2010, when it first started cutting checks to shareholders. The company has boosted its payout 173% across the stretch, with the most recent raise arriving early this year and boosting the dividend roughly 11%. Activision Blizzard looks to be in a good position to continue growing its earnings and passing some of its increased profits along to shareholders while also comfortably funding its growth efforts.

With a stable of game franchises that includes Call of Duty, World of Warcraft, and Candy Crush Saga, the publisher owns blockbuster properties that should help it benefit from the growth of the global games industry. Few competitors come close to matching the company's development and marketing resources, and Activision Blizzard has demonstrated a clear penchant for launching and sustaining hit video game series.

So, while the company's payout admittedly doesn't look like much today, there's a good chance that long-term investors who buy shares today will enjoy a substantially bigger yield on those shares down the line.