GoodRx Holdings (NASDAQ:GDRX), Vaxart (NASDAQ:VXRT), and Teladoc Health (NYSE:TDOC) are all up considerably for the year, but I'm concerned about where their share prices might be headed next year. All three companies have been able to thrive during the coronavirus pandemic, but face real clouds once it ebbs.

It's easy to understand investors' enthusiasm in all three, but given their financials and overpriced valuations, the slightest drop in the market could easily send any of these tumbling. That's why I say it might be time to get out while the getting's good. 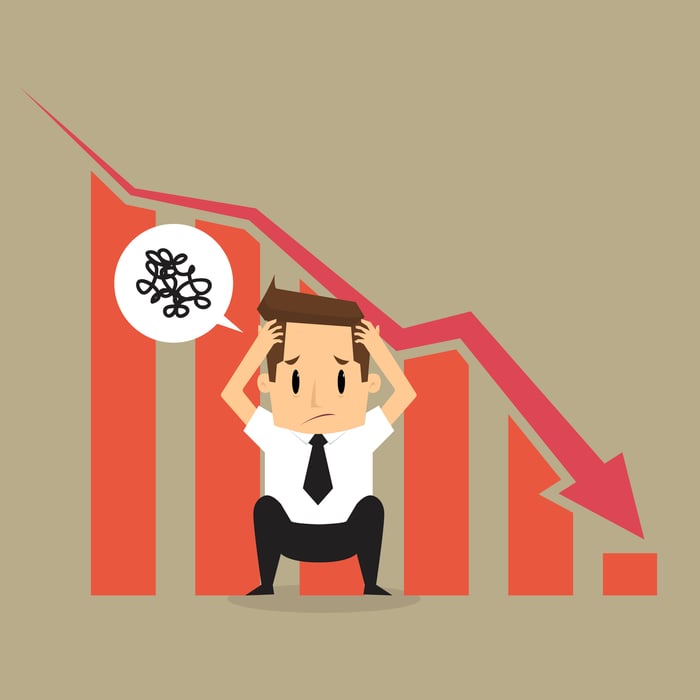 GoodRX has to be looking over its shoulder

GoodRx has a basic free service that gives members coupons to find lower-cost prescription drugs, then makes money via commissions from pharmacies, advertisements on its web site, and through a higher-end subscription service, GoodRx Gold. The company just had its initial public offering (IPO) in September.

In the long term, there's much to like about the company. According to its IPO registration statement to the SEC, it has been profitable since 2016 and has increased revenue and net income each year.

Based on its third-quarter report, it's on track for a fifth consecutive increase in annual revenue, though net income will be lower this year because it paid its co-CEOs $98.1 million in stock-related compensation in connection with the IPO.

I see two reasons why, for now at least, it doesn't make sense to hold onto GoodRx stock. First, too much of the company's potential is already baked into the stock price and it will be hard for it to duplicate this year as its telehealth service, HeyDoctor, and home delivery of prescriptions were perfect options for consumers during the pandemic.

Second, Amazon is coming after it with its own online prescription service. While GoodRx had, at last count, more than 4.4 million subscribers, there are 126 million Amazon Prime members who could use Amazon Pharmacy, which was just launched in November and offers free two-day delivery of prescriptions to members, a pharmacist-staffed help line, and discount cards for the uninsured.

Vaxart is due for a tumble

Vaxart is up more than 2,000% year to date. If you bought this stock a while back, congratulations on making a lot of money. Now, sell while you can.

There are a lot of problems I see with the stock's current valuation. A lot of it is based on hope that the company's oral vaccine against COVID-19 will be approved. If that doesn't happen, or it is delayed, the company's share price is likely to drop precipitously.

The clinical-stage biotech company from south San Francisco has never turned a profit, and this year is not going to change that. In the third quarter, the company reported a loss of $8.1 million, compared to the $5.3 million it lost in Q3 2019. Revenue was down too, with the company bringing in $265,000 compared to $454,000 in the same quarter last year.

Vaxart has also lost a little credibility due to pending legal matters. On Oct. 14, the company disclosed in an SEC filing that it is under federal investigation regarding allegations it may have exaggerated its role in Operation Warp Speed.

Teladoc has had its moment, but it's time to move on

Teladoc's stock is up more than 123% for the year. The COVID-19 pandemic made online doctor visits necessary, and the company was perfectly positioned to benefit from that trend. The company's revenue totaled $710 million in the first nine months of 2020, up 79% year over year.

However, despite all of that, Teladoc isn't going to make a profit this year. In fact, it lost $35.59 million in the third quarter, compared to $20.3 million in the same period in 2019. If the stock can't make money this year, what's going to happen when the vaccine begins to let people out of their homes and back to work, and back to regular doctor visits?

On top of that, GoodRx isn't the only company that has to worry about Amazon. Teladoc's stock fell Wednesday after news leaked that Amazon has plans for its own telehealth service.

The problem for Teladoc is all of the positive news for the company, for the short-term at least, has already been taken into account in the company's share price. That makes now an excellent time to sell and perhaps buy the stock later, when the price is a little more attractive.

There's a common thread with all three

These healthcare companies aren't necessarily poor investments. My problem with them is they're all overpriced for the moment considering their earnings. Just a quick glance of their price-to-book value, where a stock is ideally under 3, shows all three are overpriced for now. 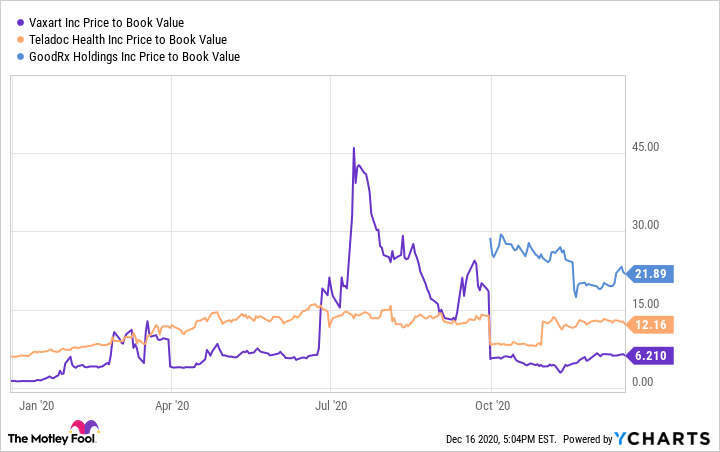 Of the three, GoodRx seems like the best choice once its share price comes down to earth. Vaxart is probably the riskiest of the three strictly because it doesn't have a product yet while Teladoc is another company with long-term potential that's overblown for the moment.