Please ensure Javascript is enabled for purposes of website accessibility
Free Article Join Over 1 Million Premium Members And Get More In-Depth Stock Guidance and Research
By Keith Speights - Dec 17, 2020 at 6:09AM

To determine how popular a given stock is with investors, look at its average daily trading volume. Stocks with high trading volumes tend to be at the center of investors' attention.

Based on this metric, Aurora Cannabis ( ACB -6.39% ) is by far the most popular marijuana stock around. Unsurprisingly, Aurora also ranks as the top pot stock in Robinhood's list of the 100 most popular stocks on its trading platform.

Popularity isn't everything. Curaleaf Holdings ( CURLF -5.99% ) and Trulieve Cannabis ( TCNNF -2.29% ) might not be in the limelight as much as Aurora, but they're beating the Canadian cannabis producer like a drum in the following ways. 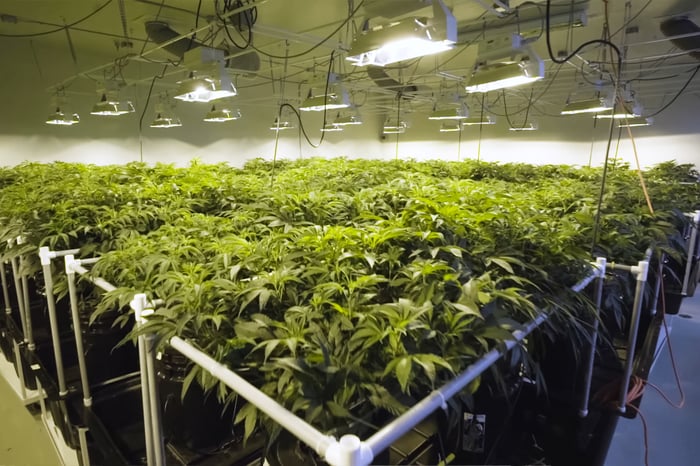 Investors cheered when Aurora beat revenue expectations with its fiscal year 2021 first-quarter results in November. The company reported Q1 revenue of 67.8 million in Canadian dollars, up a measly 0.4% from the previous quarter. Even worse, Aurora lost market share in the key Canadian recreational marijuana market. The news really wasn't worthy of celebration.

Contrast that anemic performance with the latest quarterly results for Curaleaf and Trulieve. In the third quarter of 2020, Curaleaf posted total revenue of over $182 million, a 55% quarter-over-quarter increase and nearly triple the revenue generated in the prior-year period. Meanwhile, Trulieve reported all-time high revenue of more than $136 million in Q3, up 13% from the previous quarter and nearly double its revenue in the same quarter of 2019.

The stories for Curaleaf and Trulieve were actually even better than those figures. Both companies have been busy acquiring other businesses. On a pro forma basis, including pending acquisitions, Curaleaf's Q3 revenue totaled over $215 million while Trulieve's revenue approached $155 million.

Aurora's executives can only dream of getting anywhere close to achieving profitability. The Canadian company recorded a net loss in its most recent quarter of over CA$107 million.

There's a much rosier outlook for Curaleaf and Trulieve. Curaleaf reported adjusted EBITDA of over $42 million in Q3, up 51% from the previous quarter. It also wasn't too far away from profitability, with a net loss of $9.3 million. Trulieve posted adjusted EBITDA of $67.5 million in Q3, its 11th consecutive quarter of generating positive EBITDA. It also recorded a profit of over $17 million.

Arguably the most important way that Curaleaf and Trulieve beat Aurora, though, is with their significantly greater market opportunities. Aurora competes in the Canadian recreational and medical cannabis markets, as well as in some international medical cannabis markets. However, it will be left out of the lucrative U.S. cannabis market until federal marijuana legalization happens. No one knows how long it will take for the U.S. to legalize pot at the federal level.

Curaleaf and Trulieve, of course, focus on the U.S. market. Curaleaf operates in 16 states, including fast-growing markets in Illinois and Pennsylvania. Trulieve dominates the Florida medical cannabis market and now has operations in six states.

The opportunities for the two companies continue to expand. On Election Day, five states voted to legalize recreational or medical cannabis. Two of them -- Arizona and New Jersey -- present especially promising markets.

One analyst predicts that Aurora Cannabis stock will sink to $0 over time. I'm not that bearish about the Canadian pot stock. Aurora certainly has its challenges, but there are some reasons to hope for a brighter future.

However, I don't think that Aurora deserves its widespread popularity among investors. Curaleaf and Trulieve have much stronger financial positions and much better opportunities than Aurora does. I expect them to deliver much better returns over the long run, too. Forget popularity: Curaleaf and Trulieve are simply better marijuana stocks to buy than Aurora Cannabis.