Several years ago, Netflix (NASDAQ:NFLX) embarked on a new strategy. The company said it would transition gradually to spending most of its content budget on original programming, as much as 85%, rather than licensed content.

Critics have often jeered the move, panning the company's original shows and the cash burn strategy it required, as Netflix has taken on billions in debt and had billions in free cash flow losses in recent years. That strategy may be about to face its biggest test as the streaming service is losing The Office, the hit NBC comedy that has been Netflix's most popular show, or close to it, for much of the last decade. At the end of the year, The Office will move to Peacock, the Comcast-owned streaming service that offers a free, ad-supported tier, though the bulk of the series will be only available to premium Peacock subscribers.

For Netflix investors, however, there's no need to worry about the departure of the popular sitcom. 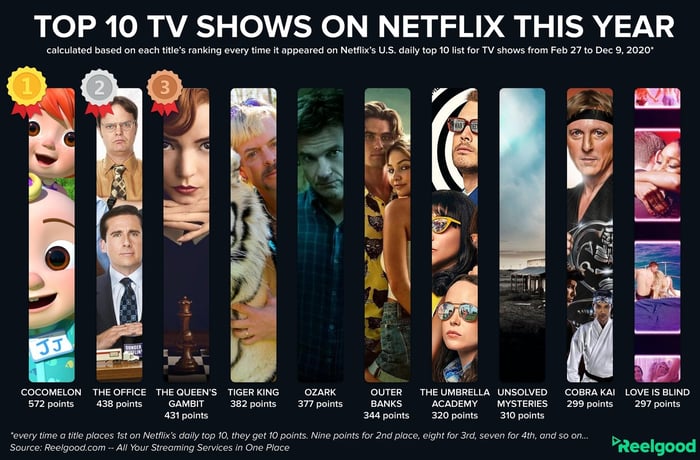 Co-CEO Reed Hastings and his team have regularly defended the move to make originals a priority over licensed programming, explaining that Netflix owns this content completely and can more easily distribute it around the world. Additionally, it helps the company differentiate itself from rivals and traditional pay TV channels that may also offer the same content. Though originals require more upfront spending, the company believes they are more profitable in the long run, and Netflix's recent quarterly reports have borne that out as it now expects its operating margin to reach 18% this year.

Some of the best evidence that this strategy is paying off may come from streaming aggregator Reelgood, which compiled a list of Netflix's top 50 shows this year based on the streamer's own top 10 list that it introduced in February. Using its own point-scoring system, which assigned higher values to titles further up on the list, Reelgood found that 80% of the top 50 shows were Netflix originals, and 8 of the top 10 were exclusive to Netflix as well.

There's another advantage Netflix has from betting on originals rather than reruns of The Office. Though audiences may enjoy some of the streamer's licensed shows, it's not going to get any attention for putting old content on the platform. On the other hand, a popular new show will get the company media coverage, awards nominations, and buzz among the general public. The Queen's Gambit, a limited series about a young female chess prodigy in the 1960s, has had a surprising effect on the broader cultural zeitgeist.

Interest in chess has surged thanks to the show. Chess boards are sold out in stores, and interest in online chess has spiked as well. Other Netflix shows like Tiger King have similarly captured the cultural dialogue. With a steady drumbeat of original content, Netflix can keep subscribers happy and assured that there will always something new for them on the platform. Describing his desire for the company to churn out hit after hit, Hastings said, "For the most part we want to be the one that can just always please you, be the convenient, simple easy choice."

Unlike other streaming services, which tend to focus on a certain type of content, Netflix wants to please everyone, and it seems to be accomplishing that goal. The company is also raising prices in North America, a further sign of confidence.

Hastings has said, when asked about the risk of losing shows, that no single title accounts for more than a low, single-digit percentage of streaming hours on the platform. Some subscribers will no doubt be disappointed to see The Office leaving Netflix streams, but it's unlikely to make a material difference to the company's performance. The company is about to cross 200 million global subscribers, the vast majority of whom are  outside the U.S. The streaming company is better off focusing on original shows than clinging to old licensed content.