The stock market has been on fire for the last several months. For that reason, it's getting harder for investors to find bargains. However, there are a few out there, especially in the energy sector, which still hasn't recovered from the impact the COVID-19 outbreak is having on demand.

On a more positive note, one of the benefits of that sector's rough patch is that investors can pick up some higher-yielding dividends at attractive prices. Three that stood out to our Motley Fool contributors are Dominion Energy (NYSE:D), Helmerich & Payne (NYSE:HP), and ONEOK (NYSE:OKE). 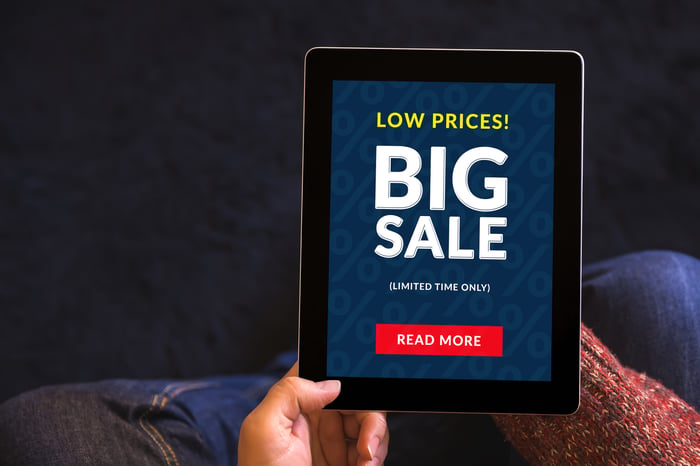 Daniel Foelber (Dominion Energy): Shares of utility giant Dominion Energy have drastically underperformed the market since the company announced a massive $9.7 billion pipeline sale to Warren Buffett in early July. Included in the sale were the assets that would have formed the Atlantic Coast Pipeline (ACP). The project went from what was expected to be a cash cow that would go into service in early 2022 to a money pit that faced regulatory hurdle after hurdle and ultimately resulted in billions of dollars of losses for Dominion Energy.

Dominion's stock is selling off for a number of reasons. The two most important are earnings losses and a dividend cut. In the second quarter, the company reported its largest quarterly loss in history after writing down assets related to the ACP. The company is paying a $0.63 per-share dividend on Dec. 20, which is the lowest dividend it has paid in five years and one-third lower than what it paid last quarter. However, the stock still yields a respectable 3.4% even with the lower dividend. 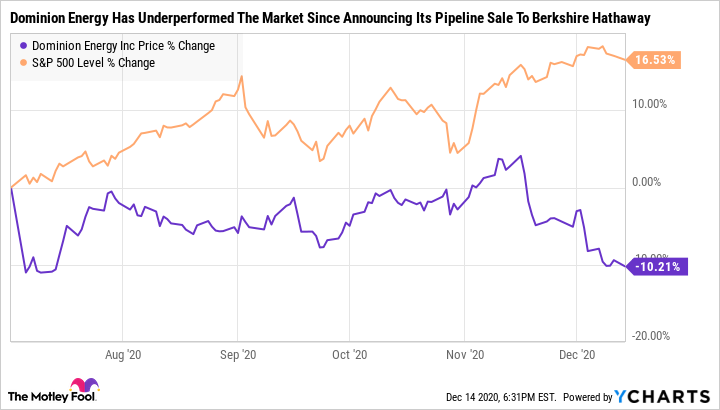 With the damage done, Dominion Energy is looking well positioned for 2021 and beyond. It had a good third quarter and earned more money than it thought it was going to now that select coronavirus vaccines are being authorized for use. It also reaffirmed its plan to grow earnings at 6.5% per year and its dividend by 6% starting in 2021. Looking ahead, Dominion plans to generate and transport energy from a variety of sources by growing renewables. The company has proposed up to $55 billion in renewable and emissions-reducing investments over the next 15 years. Since 2013, Dominion has increased its involvement in offshore wind and has an $8 billion, 2.6 GW project in the works. Permitting is expected to take two years, and construction is expected to begin in 2024.

Dominion's renewable projects will take time to build out and impact its bottom line, but the company appears to be headed in a direction that can steadily grow earnings over the long term. Investors would be wise to take advantage of the sale, collecting dividends while waiting for its growth projects to develop.

A turnaround opportunity for aggressive investors 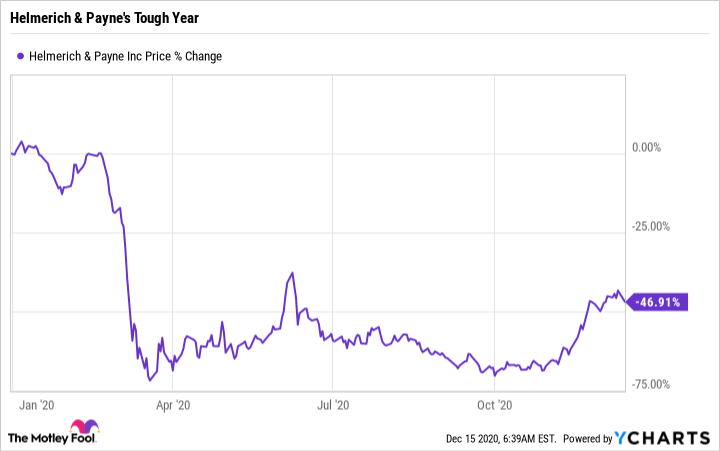 For starters, despite the dividend cut, it offers a fairly generous 4% yield. Then there's the balance sheet, where the debt-to-equity ratio is a very modest 20%, and the company is carrying nearly $600 million in cash. That cash plus an undrawn revolving credit facility provide roughly $1.3 billion in liquidity. That should be more than enough for the company to muddle through this industry downturn.

Which brings us to Helmerich & Payne's sizable portfolio of modern Super-Spec rigs. Customers prefer these over older technology, and they will be among the first rigs put back to work. In addition, the company is working to adjust its business model by shifting to new payment structures, including performance-based and distance-based pricing (typically, rates are charged on a days-used basis).

Put these facts together and Helmerich & Payne is out of favor but looks highly likely to survive this rough patch and perhaps come out the other side a stronger company. It's a turnaround story for sure -- and a pretty compelling one.

A high-yield on sale

Matt DiLallo (ONEOK): The COVID-19 outbreak and associated downturn in the oil market upended the growth ambitions of pipeline operator ONEOK. Heading into 2020, the company expected its adjusted earnings before interest, taxes, depreciation, and amortization (EBITDA) to grow 25% this year and another 20% increase in 2021. However, crashing crude prices forced its customers to shut in wells and shut down drilling rigs, causing fewer volumes to flow through ONEOK's systems.

As a result, the company currently anticipates that its adjusted EBITDA will rise by about 8.5% this year. That's still a decent result considering that many rivals expect their earnings to decline. Meanwhile, it anticipates achieving double-digit growth in 2021. Again, that's much better than most peers, which don't expect much, if any, earnings growth next year.

Despite that growth outlook, shares of ONEOK are down 45% this year. That steep sell-off has pushed ONEOK's dividend yield up to an eye-popping 9.1%. Further, it has made the stock a lot cheaper. Currently, ONEOK is on track to generate $2.8 billion of adjusted EBITDA in 2020. However, given the sell-off in its stock price, it has an enterprise value (EV) of $31.7 billion, implying that it trades at 11.3 times EV/EBITDA. For comparison's sake, it entered the year with an EV of $41.2 billion, giving it a 16 times EBITDA multiple on last year's earnings. Add that lower price tag to ONEOK's yield, and it has significant upside potential if the oil market continues improving in 2021, since that should provide a boost to its valuation.