Please ensure Javascript is enabled for purposes of website accessibility
Free Article Join Over 1 Million Premium Members And Get More In-Depth Stock Guidance and Research
By Rich Smith - Dec 20, 2020 at 7:47AM

You won't believe the bargain price NASA just got for moon mining -- or who's doing the mining.

Call it an offer they could not refuse, because it was almost too good to be true.

Three months ago, the National Aeronautics and Space Administration -- NASA -- told space companies that if they could figure out a way to get to the moon, and scrape as little as 50 grams of moon pebbles together in a pile, NASA would buy those rocks. Sight unseen, no delivery necessary -- all a company would need to do is sweep up some moon dust and tell NASA where to find it, and the space agency would cut them a check.

Then NASA sat back and waited for the bids to roll in. 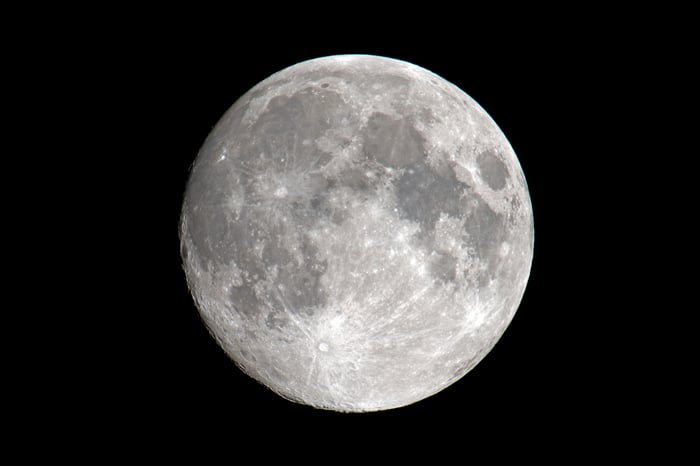 The reaction from would-be space miners was immediate and enthusiastic. Even with just three months to put together proposals, 22 separate companies submitted bids to collect space rocks for NASA. Still, in the end, the space agency picked just four winners:

According to NASA, Lunar Outpost is proposing to send a robot miner to the moon aboard Blue Origin's planned Blue Moon lunar lander in 2023. That same year, Masten plans to send its XL-1 lander. The two ispace companies will likewise utilize their own landers, the Hakuto-R, with ispace Japan going in 2022, and ispace Europe the following year.

Of the four companies, Masten is the most firmly established, having been founded in 2004 according to data from S&P Global Market Intelligence, and having already won several NASA contracts related to the Artemis moon landing project.

Why investors shouldn't get too excited -- yet

Now, before you get too excited about the investment prospects here -- don't.

There are two reasons why these initial NASA contracts don't amount to a hill of moon beans for investors just yet. Firstly, because none of the four companies named above is currently publicly traded. And secondly, because the dollar values of the contracts NASA awarded are ridiculously low, ranging from just $15,000 awarded to Masten, to $5,000 for each ispace company, to just $1 awarded to Lunar Outpost -- both regardless of how many moon rocks they collect.

Is this a good price? A bad price?

Considering what it would cost NASA to do the work itself, I'd say all three prices quoted are very good for NASA, and for taxpayers. But most importantly, with these contract awards, NASA has set a reference price for resources gathered off-world. In so doing, it has established a market for lunar mineral resources.

And this is why NASA's contract awards this month could turn out to be a really big deal for investors -- eventually. Think about it. Whatever the dollar value ascribed, why is NASA paying these companies anything at all to collect moon rocks on the moon and then just leave them there? Two reasons:

First, NASA doesn't necessarily need moon rocks. It's already got a bunch left over from the Apollo missions conducted back in the '60s and '70s. And yet, the space agency believes that "in-situ resource utilization (ISRU) will play a vital role in" the future, because it will permit bases on the moon and Mars to become more self-sustaining, and less dependent on expensive delivery of supplies from Earth. It's therefore essential to develop and test ISRU processes and technologies "on the Moon, building the required knowledge to implement [these] new capabilities."

And second, NASA wants to create "a stable and predictable investment environment for commercial space innovators and entrepreneurs," explains NASA director of Commercial Spaceflight Development Phil McAlister. By setting a price -- any price -- for moon rocks, NASA has (1) confirmed that off-planet resources have at least some value, and (2) made a first small step toward creating a market that can establish that value between buyers and sellers. And now that there is a market for off-planet resources, the risk for other, larger and more established companies venturing off-world to conduct mining expeditions in space, and selling the resources they find (water for fuel and breathing, for example, iron for construction, or copper for electronics) has decreased.

Granted, we may still be years, or even decades, away from companies doing large volumes of business away from Earth. But the movement has begun. Call it one small step for NASA, and perhaps one giant leap for the space economy.

Does the Tech Sell-Off Affect EV Stocks Like Lucid and Nio?