During the COVID-19 pandemic, perhaps the last industry you'd want to be in is the travel industry. Many travel stocks lost a huge amount of their value in the historic March sell-off. While some have partially recovered, many travel stocks still remain well below their pre-COVID levels, even in spite of terrific vaccine news.

Yet this being 2020, there were actually a few travel-related companies that managed not only to buck these negative trends, but actually thrive in this extraordinary year. The three best-performing travel included two casino operators and a disruptive digital travel platform on the heels of its red-hot IPO. Here's how Airbnb (NASDAQ:ABNB), Bally's (NYSE:BALY), and Penn National Gaming (NASDAQ:PENN) pulled off the seemingly impossible in 2020. 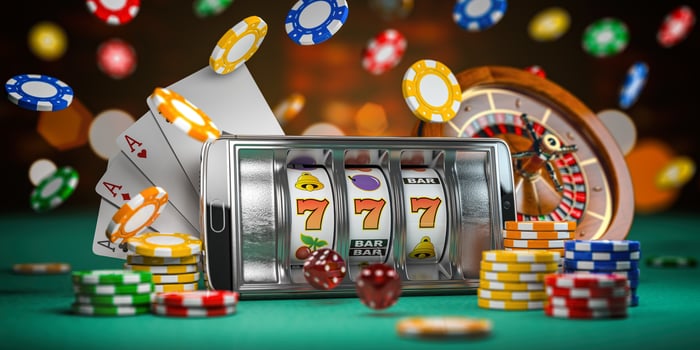 Casino operator Bally's (NYSE:BALY) might not be the first name you think of when you think of travel stocks. Of course, that could be because the company just changed its name in November after acquiring the Bally's Atlantic Casino from Caesar's Entertainment (NASDAQ:CZR). Before that, Bally's was called Twin River holdings, a company that has changed not only its name, but also its asset base dramatically just in 2020 alone.

Not only did Twin River buy Bally's, but it also bought four more casinos this year from El Dorado Resorts, which itself merged with Caesar's earlier this year. As a condition of the merger, the two companies had to divest some casinos, and Twin River -- now Bally's -- was there ready to pounce. But Bally's wasn't done yet. In October, Bally's acquired two more casinos -- one in Delaware, and its first in Illinois. Once all the deals close, Bally's will have doubled the number of casinos under its belt to 14 across 10 states.

But these brick-and-mortar acqusitions weren't what caused Bally's to surge 70%-plus this year. In fact, before mid-November, Bally's stock had only clawed its way back to breakeven. However, two more transformative deals then took place last month, sending Bally's skyrocketing.

The first was Bally's acquisition of Bet.works for $125 million. Bet.works operates a technology platform used by other sports books in New Jersey, Iowa, Indiana, and Colorado. Since sports betting was effectively legalized by a 2018 Supreme Court decision, various players have been rushing to open their own online sports books in states where gambling is now legal. Estimates for this market are massive, with Barclays estimating a $24 billion market by 2024. However, it's estimated that $150 billion in bets are made illegally every year, so the opportunity for sports gambling is massive.

The acquisition will allow Bally's to launch its own online gambling app, which it will integrate with its 14 million member omnichannel rewards program. CEO George Papanier claimed the acquisition of Bet.works' technology will give Bally's a "long-term margin advantage."

But the real big gains then came after Bally's inked a strategic partnership with Sinclair Broadcasting (NASDAQ:SBGI). Sinclair Broadcasting is massive in local regional sports networks (RSNs), with 190 television stations in 88 markets, including 21 Fox-branded RSNs that account for more than half of the U.S. MLB, NBA, and NHL teams. As part of the deal, the Fox-branded RSNs will be rebranded to Bally's, and the two companies will integrate their products and marketing state-by-state.

You may be wondering why Sinclair, with its massive reach, would offer up its premium sports-related real estate to Bally's. Well, as part of the deal, Sinclair will get warrants to purchase 14.9% of Bally's stock, an additional 10% based on performance metrics, and four-year options for 5% of Bally's at strike prices between $30 and $45. Sinclair CEO Chip Ripley said:

Bally's, with its strong brand name, premier sportsbook technology platform and expansive market access, is the perfect partner to help us change the paradigm of sports viewing across all our assets. By integrating gamification elements that allow audiences a more personalized and interactive game experience, consumers of live sports in the future can look forward to a more dynamic and engaging sports viewing experience. With the U.S. sports betting and iGaming market expected to ultimately reach ~$50 billion at maturity, this partnership perfectly positions our sports portfolio to fully capitalize on changing audience behavior.

Investors were apparently quite bullish on the integration, sending Bally's soaring to its current heights on the heels of its one-two punch following the Bet.works acquisition and tie-up with Sinclair.

A similar story to Bally's is Penn National Gaming (NASDAQ:PENN), which has not only transformed itself like Bally's this year, but did so at perhaps the most opportune time imaginable. Back in January 2020, just before the pandemic struck, Penn bought a 36% stake in Barstool Sports, the massively popular online sports website, podcast, and video purveyor. With Barstool's 66 million monthly active users at the time of the acquisition, Penn was in a prime position to launch its own online sports betting app under the Barstool Sports brand.

At launch in September, the Barstool Sportsbook app quickly became the number one downloaded sports betting app, despite launching in only one state -- Pennsylvania. Penn may have found a way to get a leg up on the early movers in the space, owing to the popularity of Barstool and its quasi-celebrity founder, Dave Portnoy. On the recent conference call with analysts, Penn CEO Jay Snowden noted that customers who engage with Penn across land-based casinos, retail sportsbooks, and iGaming are 12 times more valuable than their traditional casino customers alone.

Penn's stock has gone beserk this year, as even its traditional regional casinos have performed better than expected, and the initial adoption of the Barstool app launch in Pennsylvania was a smashing success. With Michigan on the way and another 10 states launching by the end of 2021, Penn and its uber-bullish investors are looking to carry the momentum into the new year. 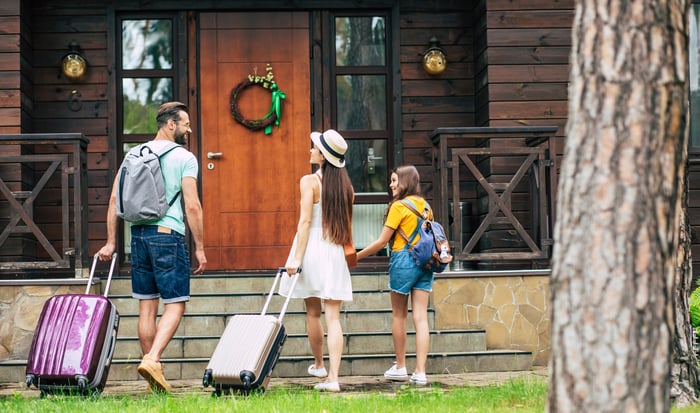 While both prior companies were casino operators that executed deals to capitalize on the newly legal online sports betting market, the other big travel winner was digital home rental platform Airbnb (NASDAQ:ABNB). The leading home rental brand received huge interest around its Dec. 10 initial public offering, in which the company raised $3.5 billion by selling 51.5 million shares at a price of $68. However, as soon as shares hit the market, they immediately skyrocketed, more than doubling on their first day of trading and even holding those gains to this day.

Airbnb is one of those companies that many consumers know and loved, with the brand name basically becoming synonymous with the product. That can be a huge advantage in terms of brand awareness. In its registration documents, management noted that 91% of guests found Airbnb organically or through unpaid channels. That's a big advantage versus other travel sites that must aggressively use performance-based marketing to bring in customers. Though Airbnb is not without some competitors, it's the clear leader, and apparently investors are enthusiastic that the home and apartment rental industry will be a winner-take-all, or at least a winner-take-most, market.

Prior to Covid, Airbnb made $4.8 billion in revenue in 2019, and was growing at a 30%-plus clip with high gross margins. It actually scored positive operating income in 2018, before heavy investments brought it back into the red in 2019. However, since Airbnb collects rental fees before the stay occurs, it generates better free cash flow. The company also proudly stated it has generated positive cumulative free cash flow over its lifetime since 2011.

What remains to be seen is how large the company can actually grow. Airbnb outlines a whopping $1.5 trillion serviceable addressable market today, but a $3.4 trillion total addressable market if it's able to enter new geographies like China, and expand into long-term stays and experiences. Still, even the current serviceable market is massive -- Airbnb takes a mid-teens service fee on bookings, so that could yield a $200 billion revenue opportunity in its current market alone. Of course, this market size includes all short-term travel stays including hotels, which aren't exactly going away anytime soon.

What's the common thread linking Bally's, Penn, and Airbnb? First, each company is a leader in an exciting new field, whether the recently legal online sports betting world for Bally's and Penn, or the relatively new concept of renting out your home or apartment to Airbnb.

In addition, each company is combining the physical travel experience with a high-growth digital offering, and all came to market with large, well-engaged audiences. Finally each company performed transformative acquisitions this year.

As the calendar flips to 2021, keep an eye on these winners, as well as any other travel companies with similar characteristics. After all, there could very well be a coming travel boom once COVID recedes into the background.