No one could have predicted the violent swings and sheer unpredictability of the 2020 stock market. While investors know to expect a certain amount of risk when trading stocks, the market's journey from rock bottom to insane new highs has drawn the ire of some investors.

Now, as the market's record-breaking streak continues on the heels of early COVID-19 vaccine distribution news and optimism on the federal government's new stimulus deal, investors need to be pickier than ever when choosing stocks to buy. As you close the chapter on 2020, here are three smart stocks to add to your buy list that could fuel enviable growth and bring winning returns to your portfolio over the next few years. 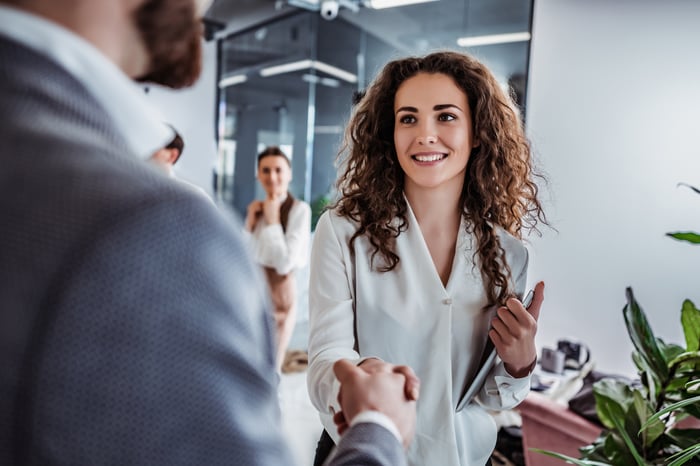 Shares of the leading freelance marketplace Fiverr International (NYSE:FVRR) have soared to a new premium this year, up 813% from January.  During the third quarter (ended Sept. 30), Fiverr achieved 88% revenue growth from the year-ago period. One key catalyst for this impressive double-digit growth is the fact that active buyers on the platform also increased by nearly 40% from the corresponding quarter in 2019.

Fiverr has also reported a growing volume of freelancers taking advantage of its Promoted Gigs initiative, which allows sellers who meet certain eligibility criteria to increase their profile visibility to potential clients. Monthly active sellers on Promoted Gigs grew by more than 2,000% between the second and third quarters of the year. Likewise, buyers on Fiverr are increasingly willing to spend more for quality freelance work. By the end of the third quarter, the average spend per buyer had grown to $195; this figure was $163 at the end of Q3 2019. Fiverr is expecting its 2020 revenue to grow between 74% and 75% from 2019, a significant jump from last year's top-line growth of 42%.

The gig economy was certainly flourishing before the pandemic. In February of this year, ADP Research Institute reported that "from 2010 to 2019, the share of gig workers in companies has increased from 14.2% to 16.4%, a 2.2 percentage point increase, or 15%." It's also not surprising that supply and demand in the gig economy has reached new heights as lockdowns, widespread layoffs, and an increasingly remote workforce has caused both companies and workers to explore alternative solutions to get their projects done.

Fiverr's straightforward platform makes it easy for skilled freelancers to connect with a wide array of clients, from one-person businesses to household name brands, and vice versa. Given the company's impressive growth figures prior to the pandemic, its stellar financial results throughout this year, and the ever-increasing popularity of remote solutions across the broader workforce, Fiverr is both a top growth stock of the pandemic era and a valuable play for long-term investors.

When the pandemic took the world by storm earlier this year, healthcare companies scrambled to develop accurate diagnostic tools for COVID-19. Abbott Laboratories (NYSE:ABT) quickly stepped up to the plate, and has since developed eight different tests to detect coronavirus infection. These tests range from molecular and antigen tests to antibody tests, several of which have been granted emergency use authorization (EUA) from the U.S Food and Drug Administration.

On Dec. 16, the FDA issued a landmark EUA for the company's 15-minute portable BinaxNOW antigen test to be used as the first "at-home, virtually guided service" for COVID-19 diagnostics. Users need to access Abbott's free NAVICA app, which is available for iPhone and Android, to facilitate the test and read its result. The fee for the entire process is just $25. Abbott is distributing the test with digital health company eMed, and plans on getting 20 million tests to the public during the first half of 2021.

Abbott's diagnostics business has certainly helped it weather the inconsistencies of the pandemic economy. Although the company's first-half 2020 sales dropped 3% compared to the first six months of 2019, worldwide sales in its diagnostics division still grew 2%.

Abbott's robust third-quarter performance quelled any investor fears, as it reported nearly 10% total sales growth year over year. Also in the third quarter, worldwide diagnostics sales grew nearly 40% year over year, while worldwide nutrition and medical device sales rose by margins of 2.6% and 3.4%, respectively. Management was so pleased with Abbott's performance that it not only increased the company's full-year guidance but also announced a 25% boost to its quarterly dividend on Dec. 11. As a Dividend Aristocrat that has raised its payout for 49 years in a row, the company is just one year shy of being crowned a Dividend King. Investors searching for a dependable stock with a highly diversified business and a healthy dividend yield (1.7%) should definitely consider Abbott Labs for their 2021 portfolio.

Social media stocks pretty much had a banner year all around, and Pinterest (NYSE:PINS) is no exception. Shares of the company have grown from just around $20 in January to roughly $70 at the time of this writing.

Pinterest posted above-average revenue growth before the pandemic (51% in 2019), and has continued to achieve healthy top-line increases throughout this year. The third quarter was Pinterest's best in 2020 so far, during which its revenue flourished by approximately 58% year over year. In the prior two quarters, the company had posted lesser but nonetheless excellent year-over-year revenue growth of 35% and 4%.

There were a few other noteworthy tidbits for current and potential investors in Pinterest's third-quarter financial statement. For one, Pinterest slashed its net losses by 24% compared to the year-ago period, while increasing its non-GAAP net income by nearly 1,400% year over year.

Lightening growth frequently comes at a cost for companies -- often in the form of mounting debt. But not in the case of Pinterest. The company boasts assets ($2.3 billion) that far exceed its total liabilities ($366.4 million). And management anticipates that Pinterest will achieve 60% year-over-year revenue growth in the final quarter of 2020. Pinterest is a stock you can easily buy and hold for the next decade or longer.