You can't turn back the hands of time, but it would be pretty cool if you could.

Anyone who has paid attention to the news this year has no doubt heard quite a bit about Moderna (NASDAQ:MRNA). The biotech became the center of attention earlier this year with its experimental COVID-19 vaccine based on messenger RNA (mRNA) technology. Its stock has risen tremendously as a result of all of this attention.

Investors who bought Moderna at its initial public offering (IPO) in late 2018 and held the stock have made a fortune. Imagine that you could somehow go back in time and scoop up shares of the biotech stock two years ago. If you'd invested $10,000 in Moderna's IPO, this is how much money you'd have now. 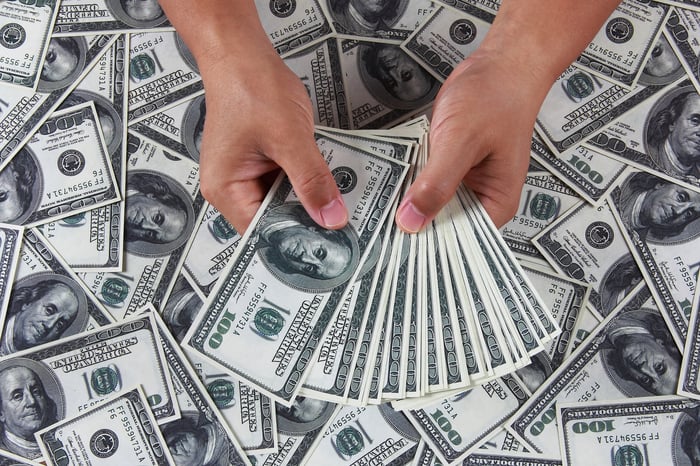 Moderna announced an IPO price of $23 per share on Dec. 6, 2018. The next day, the company's shares began trading on the Nasdaq stock exchange. Was Moderna's IPO a success? You bet. In fact, it became the biggest biotech IPO in history.

If you had $10,000 to invest in Moderna's IPO, you would've been able to buy 434 shares and had $18 left to celebrate your purchase over lunch. You would have had even more to celebrate if you'd waited and bought Moderna shares on its first trading day. Let's look at three scenarios when you could've invested $10,000: at the IPO price, at the opening price on Moderna's first day of trading, and at the closing price of that first day.

What if you had instead bought Moderna at the open of its first trading day? The stock opened at $22 per share, which would have allowed you to scoop up 454 shares (with a few dollars left over). Your investment would have grown to around $66,000 today.

An even better scenario, though, would have been to buy Moderna at the end of its first trading day. Unlike some of the IPOs we've seen this year, Moderna's share price sank well below its IPO price to close at $18.51. If you had invested $10,000 at that lower price, you could have bought 540 shares with a little spare change remaining. Today, those shares would be worth around $78,500. A few hours of waiting would have made a big difference in your return.

It could have been challenging to stick with Moderna at first. The following chart shows how the stock performed through the end of 2019. 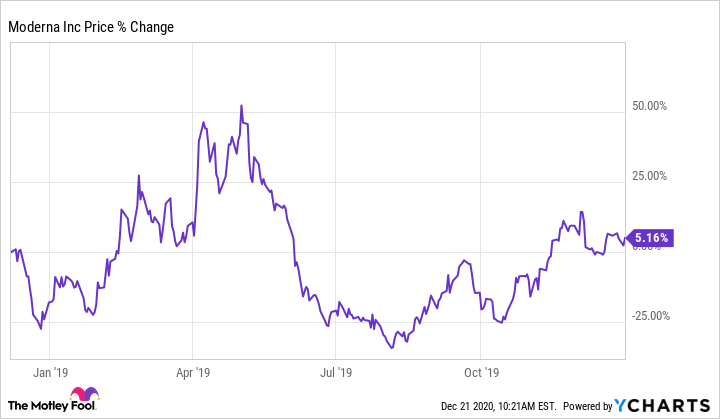 Some investors could have been tempted to lock in gains of around 50% in the spring of 2019. Others might have thought about bailing out when Moderna lost all of those gains and a whole lot more later that summer. But persistence paid off for those who waited until 2020. 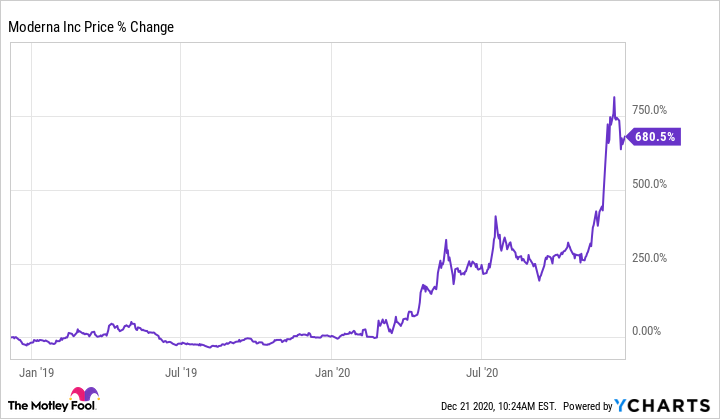 It's no surprise why Moderna stock took off this year. The biotech ranked among the leaders in the coronavirus vaccine race from the beginning. Its stunningly high efficacy and solid safety profile for COVID-19 vaccine mRNA-1273 also fired up investors.

Some might think that Moderna's best days are now over. The company's market cap is knocking on the door of the $60 billion mark. Its shares could seem ridiculously expensive.

To be sure, Moderna probably doesn't have nearly as much upside potential over the near term as it did two months ago. However, there are at least a couple of reasons for optimism that the stock could move even higher.

First, we don't yet know how durable the protection of these leading COVID-19 vaccines will prove. If the vaccines provide immunity for less than one year, Moderna will have a great shot at significant recurring revenue that could make its current valuation much more appealing.

Second, Moderna plans to pour much of the money it makes from mRNA-1273 sales into dramatically expanding its pipeline. A more robust pipeline could make the biotech worth more in the eyes of forward-looking investors.

Could some investors two years from now wish they could turn back the hands of time and buy Moderna stock in December 2020? Don't rule out the possibility.