Please ensure Javascript is enabled for purposes of website accessibility
Free Article Join Over 1 Million Premium Members And Get More In-Depth Stock Guidance and Research
By Jamal Carnette, CFA - Dec 23, 2020 at 6:05AM

Did you ride the smartphone wave to a seven-figure payday?

The age of the smartphone has essentially been owned by Apple ( AAPL -1.17% ). When founder and former CEO Steve Jobs took the stage in 2007 to introduce the iPhone, it was likely even he would not know how influential the device would soon become. The following year the company introduced the App Store, which created an entirely new ecosystem and sales channel that now grosses $50 billion in sales per year on its own.

It's been an equally successful run for investors as the company now trades at a market capitalization greater than $2 trillion. Obviously, the stock has made investors a lot of money over the last decade and has created quite a few millionaires in the process. But just how much did you have to invest a decade ago to be a millionaire today? 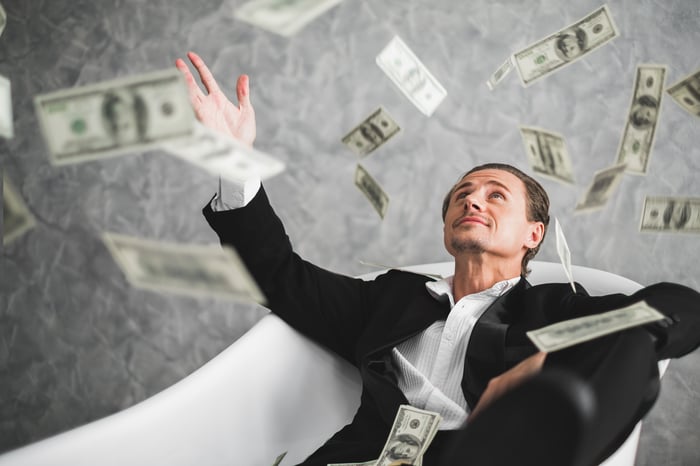 Looking back over Apple's last decade

Although Apple is firmly the most valuable company in the United States today, it wasn't that way in late 2010. The honor at that time went to ExxonMobil with Apple claiming second place, but it was short-lived. Powered by sales of the iPhone 4S that launched in late 2011, Apple pushed past Exxon the following year and now has a market capitalization ten times greater than the oil company.

Assuming reinvested dividends, shares of Apple have provided investors a gain of approximately 1,200%, or 29.2% per year, over the last decade. Including the original investment, if you would have invested $77,000 at the split-adjusted price of $11.50 a decade ago, your total investment would be worth approximately $1 million at today's prices.

There's reason to believe Apple's not stopping anytime soon. Led by current CEO Tim Cook, the company's new strategy of monetizing its immense user base with high-margin subscription-based revenue is paying off in a major way. Look for that to continue: the company's bundled service dubbed Apple One launched on Oct. 30 and will begin to show up on the income statement.

Also, Apple can grow revenue from its all-important iPhone category. While iPhone growth had declined in recent years, that trend could reverse in the current upgrade cycle. Recent reports are the company has asked for a production increase of almost 30% in the first half of next year, presumably based on increased popularity for the new 5G-compatible iPhone 12 model.

It's difficult to envision now, but Apple's amazing decade wasn't a straight path. In fact, there were periods where the company underperformed. During the last 10 years the stock endured a maximum drawdown of 46%, which is measured as the lowest value from its peak value. Still, long-term investors have been rewarded.

The most successful investors are those that are comfortable being uncomfortable, because often the hardest thing to do in investing is nothing. However, there's significant correlation to the length of time you own a stock and your probability for success. Long-term investors that can find high-quality companies that are redefining their space will be rewarded.