Jumia Technologies (NYSE:JMIA) was one of the hottest tech stocks of 2020. Shares of the German company, which provides e-commerce services to about a dozen African countries, soared over 600% this year even as recessions in its top markets throttled its growth.

The bulls believe Jumia will overcome its near-term challenges, and that its early-mover's advantage in Africa could turn it into an e-commerce behemoth like MercadoLibre (NASDAQ:MELI) in Latin America. The bears will note that Jumia is unprofitable, its stock looks expensive, and its growth is slowing. Let's take a fresh look at Jumia to see which perspective makes more sense. 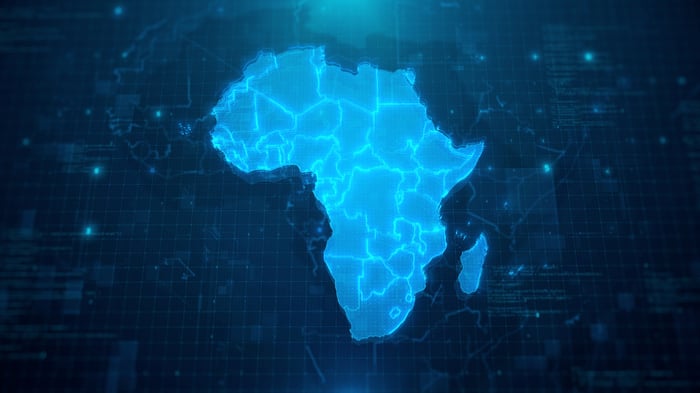 The opportunities and challenges

Jumia's online marketplace sells various products and services, including travel bookings and food deliveries, which mainly come from third-party sellers. It also processes payments with its own service, Jumia Pay, and fulfills orders with its own logistics network.

Jumia believes Africa's economic expansion and rising mobile internet penetration rates will drive its long-term growth. When Jumia went public last April, the IMF expected Africa's GDP to grow at a compound annual growth rate of 5.9% between 2018 and 2023. The mobile broadband penetration rate was also expected to rise from 32% in 2017 to 73% in 2023, according to research firm Ovum.

But this year, the COVID-19 pandemic pushed several of Jumia's key markets, including South Africa and Nigeria, into deep recessions. High inflation rates in Nigeria, Egypt, and other countries are also reducing its growth in euros.

Jumia doesn't break down its revenue by country, but that pressure is reflected in its decelerating growth in gross merchandise volume (GMV), or the value of all goods sold on its platform, and revenue over the past year:

That pressure is being exacerbated by Jumia's decision to wind down its smaller first-party marketplace, which generates higher revenue but racks up higher expenses, and rely on its asset-light third-party marketplace instead. It's also pivoting away from higher-priced products like electronics and toward cheaper products like toiletries and essentials, which further reduces its GMV and revenue growth.

Nonetheless, Jumia's annual active customers still grew 23% year over year to 6.7 million in the first nine months of 2020, while its total number of orders increased 9% to 19.8 million. That's a tiny percentage of the population of Jumia's 11 main countries, but it suggests it will keep locking in more online shoppers as internet penetration rates and incomes climb across Africa.

Its number of transactions on Jumia Pay, which is tethered to other third-party services, rose 34% year over year during that period, which boosted its total payment volume (TPV) 74% to 137 million euros ($167 million). That growth isn't reducing Jumia's dependence on its core marketplace yet, but its fintech platform clearly has room to expand in Africa -- where over two-thirds of adults remain unbanked.

At this point, Jumia is still a speculative play. Analysts expect its revenue to dip 3% this year before rising 27% next year, but those forecasts could be too optimistic considering that the company has repeatedly missed Wall Street's revenue estimates since its IPO.

Its platform is still growing, but it's selling cheaper products to boost its revenue, it's desperately cutting costs to narrow its losses, and its biggest markets face fierce headwinds. Jumia didn't benefit as much from pandemic-induced shopping as other online marketplaces over the past year, and it faces tougher challenges than companies like MercadoLibre and JD.

Jumia's stock could head higher over the long term as the African economies stabilize, but there's too much growth priced in at these levels. Therefore, it makes sense to stick with other e-commerce plays and revisit Jumia after it pulls back to more reasonable prices.