Please ensure Javascript is enabled for purposes of website accessibility
Free Article Join Over 1 Million Premium Members And Get More In-Depth Stock Guidance and Research
By James Brumley - Dec 24, 2020 at 6:55AM

We're moving into an environment where individual story stocks are going to be more closely scrutinized.

Few investors would deny that aircraft maker Boeing ( BA 2.37% ) is more attractive now than it's been in nearly two years. After a 20-month worldwide grounding of its once-lauded 737 MAX, the beleaguered passenger jet finally got the green light to take to the skies again. The company's dented reputation began to fly again, too. Factor in the prospective end to the damage the COVID-19 pandemic has caused the air travel industry thus far, and Boeing could almost be called a buy.

And some investors have done just that. Boeing shares are now up more than 60% since the end of October, with many betting big on the 737 MAX's return to service -- and sales.

But given all we still don't know about the pandemic's future as well as Boeing itself, there are a couple of reasons investors may be better served by buying a batch of blue chips rather than buying into Boeing. An exchange-traded fund like the SPDR Dow Jones Industrial Average ETF Trust ( DIA 1.42% ) is arguably the kind of holding that makes more sense headed into 2021. 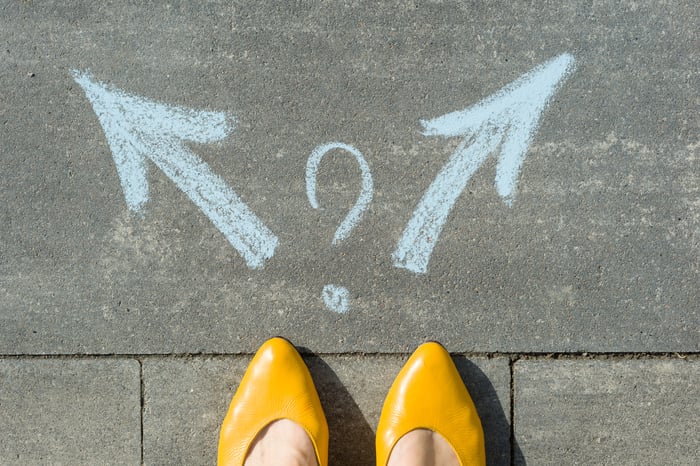 The risk-reward relationship for a Boeing trade

Investing is ultimately about risk management but risk management isn't just a matter of which stocks you buy. It's also a matter of how you decide to take any risks. Sometimes it pays to step into individual story stocks. Other times, a broad-based bet on the overall market just makes more sense. We're arguably coming out of a time when betting on Boeing has paid off on a big way, and entering a period where investors would do well to simply ride the rising tide.

It's not just Boeing Just among the Dow's 30 names, we've seen a huge performance disparity in just the past three months. Boeing shares are up nearly 35% for the timeframe, while Walt Disney isn't far behind with a 33% gain. At the other end of the spectrum, Dow constituent salesforce.com has fallen more than 10%, while Amgen is down by 8% for the past three months.

There is a common element. That is, all of these names led and lagged for clear reasons. The market is celebrating the return of Boeing's 737 MAX, and Disney's plans to become a predominantly streaming company have proven popular among investors. Yet, investors don't seem to think salesforce.com's intended acquisition of Slack is the right move -- or at least not at the right price -- while Amgen hasn't prioritized participation in the COVID-19 vaccine derby.

These are all stories (or in Amgen's case, a lack thereof) that unfurled at a time investors may have had appetites for stories. It's been a rough year for a lot of reasons.

The thing about story-driven environments is, they can evaporate as quickly as they take shape. A new U.S. president as well as uncertainty as to when the pandemic may actually end increases the odds of such change happening sooner than later.

This prospective shift poses a threat to all the market's recent big winners, but perhaps none of the Dow 30's big gains are more vulnerable to such a change than Boeing's.

Yes, the 737 MAX is flying again, which is a moral victory to be sure. As fellow fool Jason Hall pointed out just a few days ago though, the company's still got plenty problems to sort out beyond the 737 MAX's airworthiness. Namely, Boeing may be one of the last names to recover from the pandemic. Already trading at nearly 100 times next year's analyst-estimated earnings, that makes the aircraft maker an especially risky bet right now.

A transition out of a story-driven environment isn't necessarily a reason to avoid stocks altogether, however. The market itself remains surprisingly healthy.

Yes, the COVID-19 pandemic has taken a toll on corporate profits, though not as much as you might think. Standard & Poor's reports that the S&P 500's overall third-quarter earnings were up more than 40% from the second quarter, and nearly double the first quarter's COVID-crimped profits. Standard & Poor's analysts are also still modeling a record-breaking profit for the S&P 500 as a whole in 2021, clearly suggesting they see growth on the horizon.

As is always the case, some stocks will lead the indices to their merited gains. Others will lag the market's overall returns. Unlike the backdrop from just a few months ago though, it's anybody's guess as to which names will lead and which will lag. My guess is Boeing will be among the latter.

Again, think about it. Boeing's 737 MAX was widely recertified by the world's air-travel regulators by last month, but we knew it was likely to happen sometime this year by late 2019. Investors were ready for the news.

As we survey the current market landscape, the next round of company-specific stories for Boeing isn't as clear as the previous round was. All we can see with any real clarity is, the global economy is pulling out of its COVID-inspired slump. That makes a blue-chip-rich group of stocks like the Dow Jones Industrial Average the smarter, risk-adjusted trade here.