There's good reason to believe there will be some long-term winners in the group. The global market for 3D printing products and services is expected to reach nearly $41 billion in 2024, for a brisk compound annual growth rate of more than 26%, according to Statista. 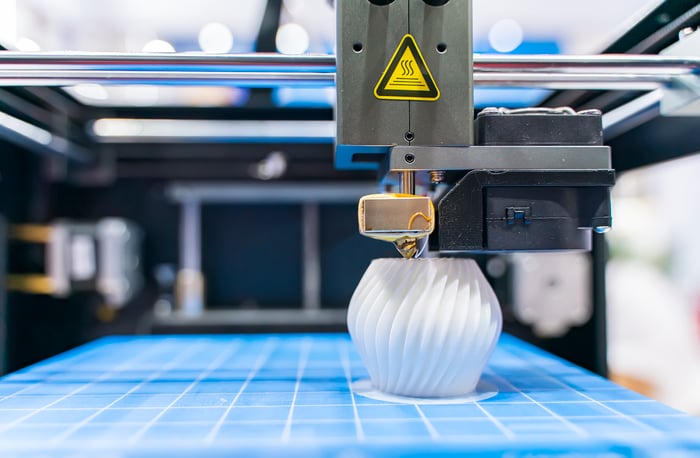 To be included on the list, companies had to make products used for 3D printing or provide 3D printing services, and the size of their 3D printing business had to be fairly significant relative to their entire business. Moreover, their stocks had to have a market cap of at least $300 million (meaning they had to be at least small-cap stocks) and be publicly traded on a U.S. exchange since at least the start of 2020.

One note before we move on to our top three 2020 performers: Proto Labs is the only non-pure-play in the chart.

The company wasn't profitable from a standpoint of net income or earnings for the trailing 12 months, but it did generate positive free cash flow (FCF) over this period. Its business has performed better than 3D Systems and Stratasys for some time, though Proto Labs has performed the best of all these companies.

Like other 3D printing companies, Materialise's overall financial results have been hurt this year from the COVID-19 pandemic.

Proto Labs, based in Minnesota, is a technology-enabled, quick-turn contract manufacturer of plastic and metal prototypes and short-production-run parts. It offers clients both traditional manufacturing and 3D printing services, and operates in the United States, Europe, and Japan.

In the third quarter of 2020, Proto Labs' 3D printing revenue accounted for 15.1% of its total revenue. While this is a relatively small percentage, this business has been growing faster than the company's combined traditional manufacturing services.

The 3D Printing ETF, which began trading in July 2016, is the only exchange-traded fund focused on this space. It's not an actively managed fund, but rather tracks an index.

3D Systems and Stratasys sell products for 3D printing, including printers, software, and materials, and also provide on-demand 3D printing services. SLM Solutions, which is based in Germany and listed on the Frankfurt stock exchange, specializes in making metals 3D printers. HP entered the 3D printer market in 2016.

Many of the ETF's smaller holdings are companies that use 3D printing in their operations, rather than supply products for 3D printing. An example is Align Technology, the fund's 18th largest holding, accounting for about 1.6% of the portfolio value. Align uses 3D printing to make clear-plastic dental retainers.

Of the stocks listed in the chart, Proto Labs is probably the best choice for most investors. It's well run and consistently profitable, which sets it apart from the others. Investors comfortable with more risk and investing in companies that are not consistently profitable might also consider buying Materialise stock. The company is run by the founder and operates in some attractive niches.

Investors can also get exposure to 3D printing by buying stocks of companies whose businesses use the technology, such as Align.