This year has been both a good one and a bad one for the healthcare sector. Some companies have been helped by the pandemic, especially those that either developed COVID-19 therapies and vaccines or focused on virtual care. Other companies have been hurt as the coronavirus outbreak disrupted their businesses.

A brand new year is right around the corner, though. It will bring new opportunities and new challenges. Several healthcare companies appear to be in especially strong positions to succeed next year. Here are what I think are the three best healthcare stocks to buy for 2021. 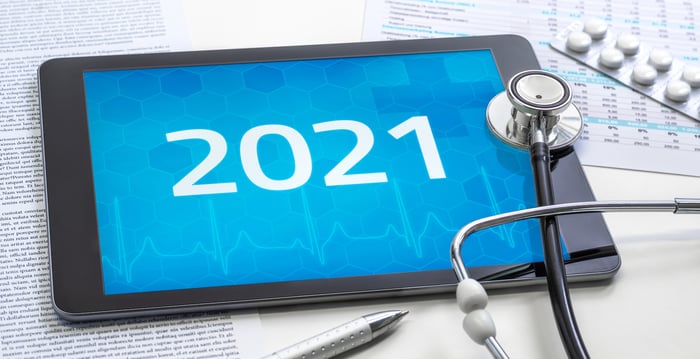 Intuitive Surgical (NASDAQ:ISRG) belongs to the group of healthcare companies that didn't fare so well with rising COVID-19 cases this year. The company is the leader in robotic surgical systems. With many non-urgent surgeries delayed due to the strain on hospitals resulting from the pandemic, Intuitive's revenue from selling replacement instruments and accessories for its systems took a hit.

There are reasons to be optimistic that the situation will improve significantly in 2021. As coronavirus vaccines roll out, the number of COVID-19 cases should decline over time. This will pave the way for a likely resurgence in the volume of procedures performed with robotic assistance, boosting Intuitive Surgical's revenue.

Even if it takes longer than hoped for things to return to normal, Intuitive is still a great stock to buy for the long term. The company is poised to benefit from an absolutely unstoppable trend -- aging populations. As the number of seniors rises in the U.S. and other major countries, the demand for surgery (including several types of procedures for which robotic assistance is optimal) will also increase.

Even with Intuitive's impressive growth over the last two decades of pioneering robotic surgery, the vast majority of procedures are still performed without using robotic systems. This presents another huge opportunity for Intuitive Surgical. And it's one that the company is actively targeting with its investments in research and development to expand the types of procedures for which its systems can be used.

I think that Vertex Pharmaceuticals (NASDAQ:VRTX) ranks as the best biotech stock on the market right now. That's a bold claim, but it's one that I believe the facts support.

Vertex's revenue and profits are soaring thanks to its four approved cystic fibrosis (CF) drugs. This trend seems almost certain to continue into 2021 and beyond. The company's newest CF drug, Trikafta/Kaftrio, practically became an instant blockbuster in the U.S. Vertex won European regulatory approval in August and has begun to launch the drug in key European markets.

No other company is even close to taking on Vertex in the CF market. Vertex's four drugs are the only ones approved to treat the underlying cause of the rare genetic disease. While there are several drugmakers with clinical-stage candidates targeting CF, none of them has advanced beyond phase 2 testing.

Vertex isn't limiting its focus to only CF. The biotech's pipeline includes several promising programs targeting other rare genetic diseases, notably including its partnership with CRISPR Therapeutics to develop gene-editing therapies for beta-thalassemia and sickle cell disease. Vertex also has high hopes for its experimental gene therapy that could potentially cure type 1 diabetes. The company plans to begin early stage clinical testing of this candidate next year.

Guardant Health (NASDAQ:GH) has been the biggest winner in 2020 among these three healthcare stocks. Its shares have skyrocketed more than 70%. I expect another sizzling performance in the new year.

In August, the company's Guardant360 CDx became the first liquid biopsy approved by the U.S. Food and Drug Administration (FDA) for comprehensive tumor mutation profiling for any type of solid tumor. The liquid biopsy was also approved as a companion diagnostic to identify patients with non-small cell lung cancer who could be well-suited for treatment with AstraZeneca's Tagrisso.

But even bigger opportunities lie ahead for Guardant Health. The company is conducting clinical studies evaluating Lunar-1 and Lunar-2, liquid biopsies that target cancer recurrence monitoring and early stage cancer detection. The potential U.S. market for these two products tops $45 billion. I view Guardant Health as an excellent stock to buy for 2021 and beyond.