When a retiree decides to buy stock, they often start by looking at companies that pay the highest dividends. Unfortunately, those payouts aren't promised, and focusing on them can turn out to be a dangerous way to invest.

Take Annaly Capital, as an example. The stock sports a 10.5% dividend. That seems enticing until you realize the number of shares outstanding has jumped from 947 million at the beginning of 2016 to 1.4 billion today. While you were collecting the dividend from Annaly -- which was cut in June of this year -- your ownership stake in the company was reduced by 50%.

Shareholder yield is a better metric of how much cash the company is returning to investors because it takes into account both dividends and share buybacks. Two of the companies that rise to the top when looking at shareholder yield are JPMorgan Chase (NYSE:JPM) and Amgen (NASDAQ:AMGN). Despite being vastly different, they're both stable, well-known companies that could make great investments for retirees. 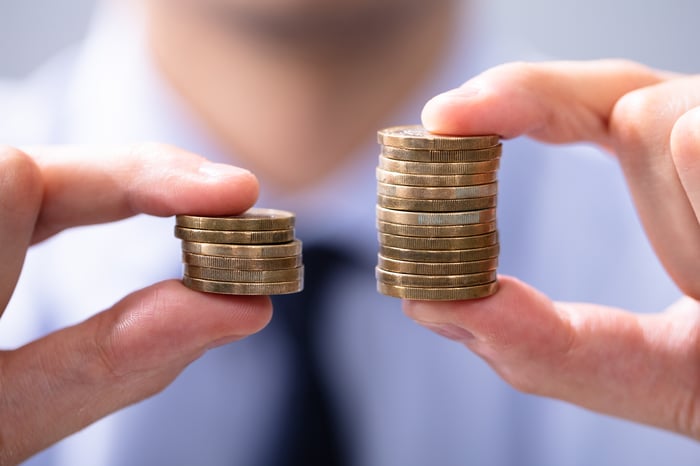 JPMorgan may be the strongest and most diversified bank in the world. With $115 billion in global revenue, it ranks No. 1 in U.S. credit card sales and global investment banking, and its commercial banking and asset management businesses have grown consistently since the 2009 financial crisis. Management even announced in the third-quarter earnings release that the bank ranked No. 1 in U.S. retail deposits for the first time ever.

CEO Jamie Dimon -- who made Glassdoor's employee-choice top CEO list and Harvard Business Review's best CEO list in 2019 -- has led an impressive program of returning capital to shareholders in the past half decade. While revenue and earnings have grown since the beginning of 2016 by 24% and 49%, respectively, earnings per share has grown 79%.

That happens when the company buys back stock because the earnings are divided by fewer and fewer shares each year. It's clear the buybacks will continue. On December 18, the board of directors announced a new share repurchase authorization for $30 billion.

JP Morgan Chase offers a 2.9% dividend yield, with a payout that has nearly doubled in the past five years -- growing from $1.68 per share to $3.30. Its stock price that's kept pace with the S&P 500 over that same time. As a result, retirees would be hard-pressed to find a safer bet that returns as much cash to shareholders.

Amgen is a 40-year-old biotech company with $23 billion in annual sales, generated by its best-selling drugs to treat inflammatory diseases and osteoporosis. They also support cancer patients undergoing chemotherapy.

The company's revenue declined by 2% last year as generic competition eroded sales of its legacy products, but management expects that to be an anomaly. Late last year, the company spent $11.2 billion (after tax benefits) to purchase the rights to Otezla, the psoriasis drug that Celgene was forced to sell when it was acquired by Bristol Myers Squibb. Otezla has already generated $1.58 billion in sales in the first nine months of 2020.

Management is also counting on cholesterol drug Repatha to fuel growth. In 2018, the price of Repatha was lowered 60% to decrease out-of-pocket cost for seniors and broaden insurance coverage. That gamble worked. Year-over-year sales were up 20% in 2019, and in the first three quarters of 2020, sales climbed by 62%, 32%, and 22%, respectively.

Amgen has also shown a willingness to drive shareholder yield by repurchasing shares and raising its dividend. While revenue and earnings have grown since the beginning of 2016 by 8% and 13%, respectively, earnings per share have climbed 42%, thanks to all of the stock the company repurchased.

Further, management had $3.5 billion more cash on the balance sheet on Sept. 30 than at the end of 2019. That cash could power continued share buybacks and dividend increases.

Amgen's current dividend yield of 3.2% is very respectable but promises to keep getting better. Now that the company has announced its first dividend of next year, the past five years' payouts will have been raised respectively 26%, 15%, 10%, 10%, and now 10% again for 2021.

Combining buybacks and dividends offers a fresh perspective on what it means to be a high-yield stock. When you rely on dividends for living expenses, buying stocks with enormous payouts can be enticing. But tread carefully. Those high dividends likely come at the expense of shareholders in some other way.

Instead, look for stable companies that can afford to give more money back to shareholders while continuing to grow their businesses. JPMorgan and Amgen are proving they can do both, consistently providing respectable dividends and a positive overall shareholder yield. Retirees should focus on this metric -- and consider buying these companies -- as a way to enjoy high returns while not putting their capital in as much risk. 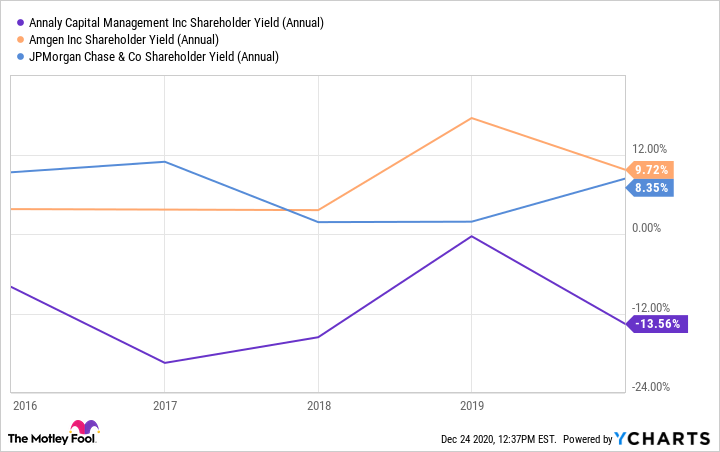