Please ensure Javascript is enabled for purposes of website accessibility
Free Article Join Over 1 Million Premium Members And Get More In-Depth Stock Guidance and Research
By Will Healy - Dec 28, 2020 at 7:43PM

When it comes to tech stocks, the names topping the performance list this year might surprise you. Companies involved in apps and solar energy have been heating up portfolios the most. Specifically, Digital Turbine ( APPS 13.42% ), Enphase Energy ( ENPH 4.82% ), and Daqo New Energy Corp ( DQ 9.61% ) have supercharged portfolios the most so far in 2020. Still, these tech names experienced this growth for different reasons. Let's take a closer look at each stock to see whether that growth can continue.

Digital Turbine is a platform that helps app developers and manufacturers of wireless devices. It can help businesses create and lay out media content. The company can also promote and help companies get their apps installed on devices.

So far, more than 40 mobile operators and OEMs have adopted the platform. Over 3 billion app preloads have delivered tens of thousands of ad campaigns.

This helped to grow revenue in the latest quarter by 116% from the year-ago level. Adjusted net income tripled during the same period to a diluted EPS of $0.15. The company expects earnings of $0.15 or $0.16 per diluted share in the current quarter.

Such growth has uploaded massive returns to investors' portfolios. Year to date, this stock has risen by almost 700%.

The forward price-to-earnings (P/E) ratio stands at about 64. Analysts forecast earnings growth will slow to 39% next year, but a 5G upgrade cycle should spur more smartphone sales. Moreover, Digital Turbine designs its platform for cross-selling, meaning it could gain additional sales opportunities from current customers. 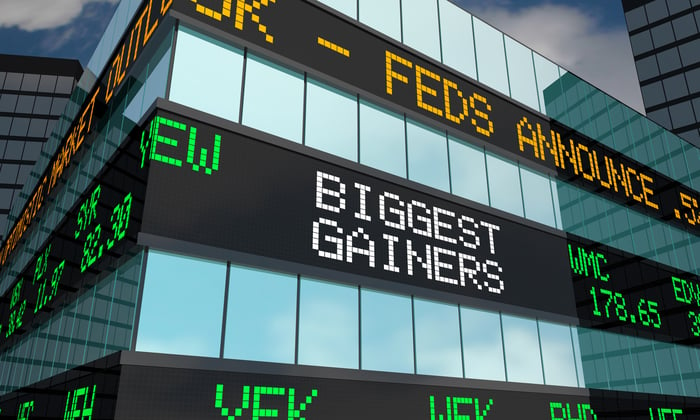 Enphase bills itself as the "world's leading supplier of solar microinverters." Year to date, this energy technology company has given investors quite a charge as the stock has risen by close to 600%. The company experienced a revenue decline from year-ago levels in its most recent quarter.

Nonetheless, since GAAP gross margins improved from 36% to 53% over the course of the year, Wall Street cheered, and the price went higher. The company has since benefited from analyst upgrades. Also, more recently, it launched a certification system in Australia, which acts as a seal of approval describing a technician's work as "Enphase approved." It has also integrated itself more closely with solar panel manufacturers.

Moreover, it does not expect another revenue drop. The company forecasts revenue will come in between $245 million and $260 million for the fourth quarter of 2020. This amounts to a year-over-year increase between 17% and 24%.

Analysts forecast that by the end of next year, profits will rise by 45%. This would  probably not surprise anyone who follows the industry. Markets and Markets predicts a compound annual growth rate (CAGR) for the microinverter industry of 21% through 2025.

Still, the stock price seems to reflect that growth. At a forward P/E ratio of just over 100, the short-term growth trajectory for Enphase stock is uncertain.

Nonetheless, Enphase should prosper long term as the company has positioned itself to continue leveraging its partnerships in this high-growth industry.

Daqo manufactures high-purity polysilicon, a raw material essential for the solar industry, and supplies it mostly to domestic solar manufacturers in China. China continues to shine the light on solar as it has long remained the world's largest emitter of greenhouse gases. This helps to spur demand for renewables.

Daqo is far from the only polysilicon maker. According to Bernreuter Research, it is the sixth-largest in the world. However, it is the largest to trade on a major U.S. exchange.

The stock of the Shanghai-based company has risen by almost 475% year to date. During the third quarter, the company completed a digital transformation project that allowed it to improve manufacturing efficiency.

In its most recent conference call, CEO Longgen Zhang implied production could reach approximately 20,000 metric tons (MT) of polysilicon. If that occurs, it would amount to a 9% increase over third-quarter production levels. It would also be a 23% increase from production levels in Q4 of 2019.

In the latest quarter, revenue increased by 50% from year-ago levels. During the same quarter, earnings of $0.35 per adjusted American depositary share surged 150% higher.

Furthermore, despite that massive growth, the stock sells at a forward P/E ratio of around 17, a relative bargain considering the company's growth.

Additionally, during Q4, it continues to make additional deals. The company announced new supply agreements with JA Solar and Trina Solar during the quarter.

Between its valuation and expanding client base, the solar energy company could heat up gains in 2021 and beyond.