Like individual people, companies have reacted to the challenges presented by the COVID-19 pandemic in divergent ways. As 2020 nears a close, let's examine this topic, since the global health crisis was the defining issue of the year.

Put your casting director's hat on. If you were picking the actors for a movie in which public companies were characters, which would you cast as the superheroes and the villains?

This article explores my casting for the superheroes, which is limited to companies whose stocks are large caps (market capitalizations of at least $10 billion). Two of the caped heroes would be Zoom Video Communications (NASDAQ:ZM) and Beyond Meat (NASDAQ:BYND). 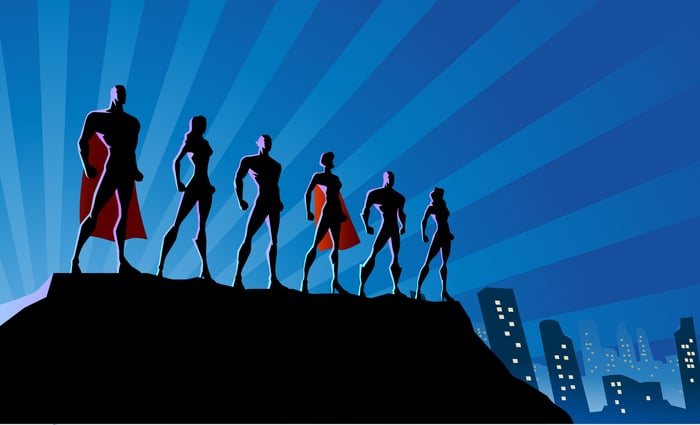 Zoom: Generosity beyond the call of duty in providing free meeting minutes

Videoconferencing specialist Zoom has received a big tailwind from the pandemic. We can't know for sure how fast it would be growing if the crisis never occurred, but these numbers should give you a decent idea: In the third quarter of 2020, Zoom's revenue soared 367% and adjusted earning per share skyrocketed 1,000% year over year. In the fourth quarter of 2019 (the most recent quarter unaffected by the pandemic), year-over-year revenue and adjusted EPS surged 78% and 275%, respectively.

Granted, it's easier to be magnanimous when the pandemic has provided a big boost to one's business. However, the company's top management team did not have to be as generous as it has been in providing free meeting minutes to schools and individuals. In March, Zoom removed its 40-minute time limit on its basic free accounts for K-12 schools in the United States and in other countries. And the company has removed time limits for individuals on certain holidays.

The humanity factor aside, taking a short-term hit on profit by providing so many free meeting minutes was the smart thing to do from a long-term business perspective. Zoom has earned an immense amount of goodwill among customers and potential customers. But I still don't think all top management teams whose companies could afford it would have been as generous. There's a lot of short-term focus and inadequately restrained greed in Corporate America.

Is Zoom stock a buy now? Yes. And no, it's not too late. While the company will surely lose some business once the pandemic ends, it shouldn't be that significant, at least beyond a short-term perspective. The crisis has accelerated the work-from-home trend, and there is no fully going back. Moreover, it's also expanded the company's total addressable market as some entities have discovered new uses for Zoom's services.

The stock's price has run up tremendously this year (451% through Dec. 24) even after its recent big pullback. So it's more important than usual for investors to dollar-cost-average their way into their full position. If you invest the same dollar amount at some specific interval (such as quarterly, for instance), you won't risk buying all your shares at a price that turns out to be some intermediate- or long-term peak.

Beyond Meat: Doing a tremendous job with the hand it was dealt

Beyond Meat, the leading maker of plant-based meat substitutes, has experienced both a tailwind and a headwind from the pandemic. While the crisis has helped its retail channel, it has taken a bite out of its food service business, which supplies restaurants and other dining operations, such as those within casinos.

CEO Ethan Brown's attitude on the earnings calls regarding the many state-mandated temporary partial or full closures of its food service customers seems to be, "This is the hand we were dealt, and we're going to deal with it the best we can, and with grace." Indeed, the company did a tremendous job quickly repurposing assets from its food service business to its retail business when stay-at-home orders and temporary business closures first affected much of the U.S. in March. This was a Herculean effort for some time.

Moreover, not once have I read about Brown venting his frustration about public-health measures by complaining about states or government agencies, as have leaders of some other large public companies.

In addition, soon after the pandemic began, the company pledged to donate more than 1 million Beyond Burgers. Its Feed A Million+ pledge involves donating its products to food banks across the country, and "working with partners to prepare and deliver donated Beyond Meat meals to hospitals, community centers and other frontline organizations."

The company's shares are up 80.7% in 2020 through Dec. 24. Would I buy Beyond Meat stock now? I'm in a wait-and-see mode. The company is the leader in a fast-growing market and continues to gain market share. My main concern relates to competition: Will Beyond Meat be able to fend off the increasing competition without sacrificing its profit margins too much? If you believe the answer to this question is yes, then you might consider buying this stock.