Being a marijuana stock investor is hard. There are more unprofitable and indebted companies to choose from than profitable and reliable ones, and your shares are often at high risk of being diluted. While you'd obviously prefer to pick a winner, sometimes it can feel like a win just to hold steady.

Of course, a few companies in the industry are building toward regular and predictable success, and it's never certain that struggling stocks will continue struggling. If you want to understand which marijuana stocks were laggards and why, you're in the right place. 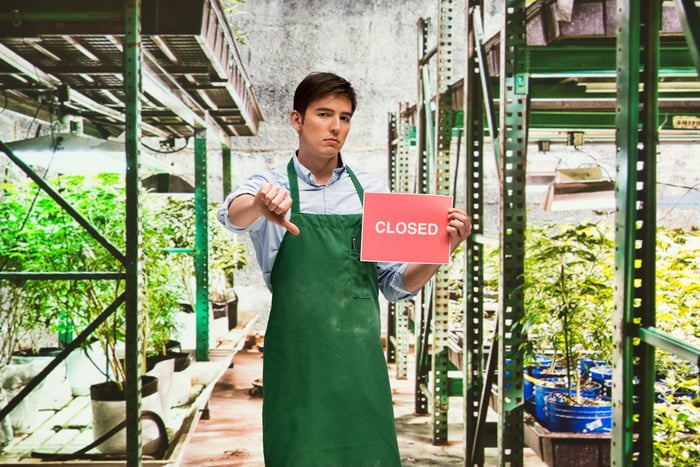 HEXO (NASDAQ:HEXO) lost more than 37% of its value this year, even as its year-over-year quarterly net revenue growth exceeded 100% in the first quarter of fiscal year 2021. It announced major job cuts in November, and it reduced its human resources staff by more than half, from 23 people to 9.

On the bright side, Hexo's losses have been slowing for six consecutive quarters, and its adjusted earnings before interest, taxes, depreciation, and amortization (EBITDA) were under $1 million in the most recent quarter. This was made possible by strong improvements in its cost of sales and reductions in its operating expenses. Investors will be pleased to hear that the company looks like it will be profitable early next year should these positive changes continue.

OrganiGram (NASDAQ:OGI) dipped by more than 40% this year, due in part to ongoing struggles with operational efficiency. In the fourth quarter, its gross margin plummeted by 1,252% year over year and its cost of sales skyrocketed by 87%. Some of this change is caused by fluctuations in the price of cannabis in the wider economy, but Organigram's large amount of unsold inventory is a larger factor.

Like many of the companies on this list, OrganiGram sought to cut its selling, general, and administrative (SG&A) expenses in 2020. Unfortunately, these cuts were a bit too deep, as management admitted that it was forced to leave revenue on the table that it could have otherwise captured. Nonetheless, its revenues are still growing, so it might have a better time next year if it can get its costs under control.

Tilray (NASDAQ:TLRY) contracted more than 50% in 2020 as a result of its ongoing unprofitability and practically flat year-over-year quarterly revenue as of Q3. In short, the cost for the company to cultivate a gram of cannabis has risen considerably. In the third quarter of 2019, the average cost per gram was $2.28, but it rose to $4.23 by Q3 2020. Management suggested that this happened because the company is shifting its operations to focus on higher-value products like vaporizers and oils, both of which are more costly to produce than bulk cannabis flower. 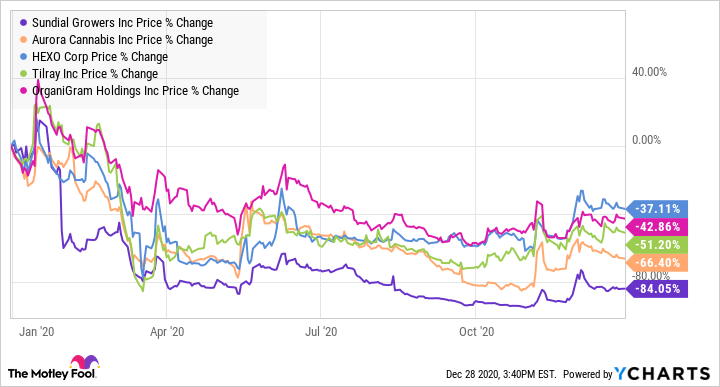 Tilray might have a break on the horizon, however. Recently, it announced that it will merge with Aphria (NASDAQ:APHA) in a deal that will make the new entity the largest in the industry. This merger won't necessarily make Tilray profitable, but it will increase its reach and deepen its portfolio of brands. Keep an eye on the company's margins in the quarters after the merger to see whether these additions are solving its long-standing problems.

Aurora Cannabis (NASDAQ:ACB) is perhaps the most closely watched stock on this list, and it's also the second largest when it comes to shareholder losses this year, clocking in at a drawdown of around 65%. The company's performance deteriorated considerably in the last quarter compared to the quarter before; its earnings loss increased by 79%, even after making accounting concessions for the price of cannabis in inventory.

Despite trending in the wrong direction, Aurora is taking action to reduce its overhead. Its SG&A expenses dropped by 25% in the last quarter compared to the prior quarter, and its research and development costs fell by 66%. It recently announced the closure of one of its production facilities, and it also scaled back the operations of an additional facility to 25% of its former capacity. These weren't the first cuts, and they probably won't be the last. But investors should take heart that the company has $450 million of cash on hand to keep the lights on in the meantime.

Sundial Growers (NASDAQ:SNDL) is the largest loser on this list, with its stock collapsing by more than 84% this year. In fact, in May, its perilously low share price left it in danger of being delisted from the Nasdaq. This danger is still real, but the company has until the middle of next year to regain compliance with listing standards. Shareholders should still worry about sharp declines in its net revenue and gross margin compared to the most recent quarter last year.

Sundial's big silver lining is that the company is debt free as of mid-December, successfully concluding a year-long effort to pay down a $227 million burden. This means that it can use its $62 million in cash to grow its revenue or purchase small competitors. Thankfully, things are looking up for Sundial's 2021.