Please ensure Javascript is enabled for purposes of website accessibility
Free Article Join Over 1 Million Premium Members And Get More In-Depth Stock Guidance and Research
By Royston Yang - Dec 31, 2020 at 8:00AM

Penny stocks may sound tempting, but the rewards are not worth the risks.

We've all probably been tempted to buy penny stocks at some point in our lives. Penny stocks seem attractive because we're used to seeing small things grow into big things, and it's tempting to think a very low-priced stock has greater potential to outperform than large-cap stocks.

The reality, however, is that penny stocks may not be well-capitalized, and they're usually the first to crumble under the weight of crises and competition. And don't be misled by a low valuation -- it may be justified because of some flaw in the company's business model. It's good to remember that low can always go lower if the company falters and sputters.

Large-cap companies, on the other hand, tend to have stronger balance sheets that make them more resilient during downturns. And some have the ability to continue growing at a rapid pace despite having a larger earnings base, simply because they have what it takes to continue maintaining their market share and garner more customers.

Here are three large companies to consider putting into your portfolio. 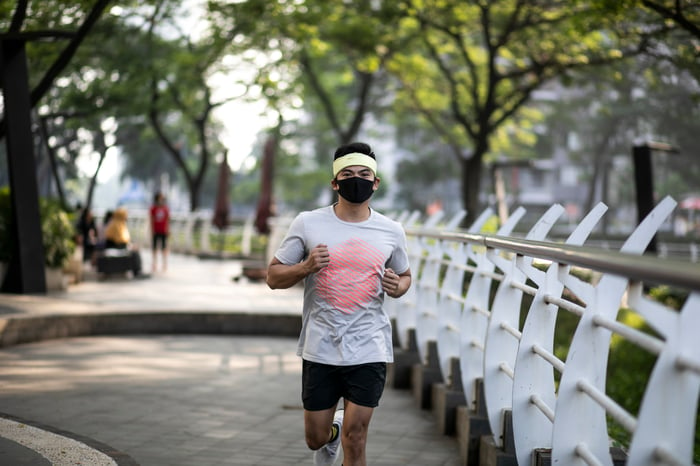 Nike's ( NKE 0.14% ) innovative line of sports footwear is well-regarded by athletes, and the sports giant has continued churning out a mind-numbing array of new products every year. The company faced stress from the temporary closure of the bulk of its stores earlier this year due to the COVID-19 pandemic but has since picked itself back up and defied expectations by posting growth during its latest quarter. Nike's earnings for the quarter that ended Nov. 30 saw revenue rise 9% year over year to $11.2 billion, while net income climbed 12% year over year to $1.3 billion.

CEO John Donahoe has talked about new-product launches in the coming year that shows Nike has no intention of slowing down its pipeline. The plan is to release a new woman's running shoe that helps to reduce injury and introduce its first performance shoe on Nike's sustainable footwear platform. On the digital front, Nike has enjoyed a more than 80% year-over-year growth in digital sales for three consecutive quarters.

The pandemic has accelerated the e-commerce and digital-payments trend, and one big beneficiary of this is MercadoLibre ( MELI -6.75% ). A leader in e-commerce within Latin America, the company has seen its business improve by leaps and bounds as the pandemic has pushed more people to go online.

In the first nine months of 2020, the number of unique active users nearly doubled from 61.1 million to 112.5 million. Gross merchandise value jumped 42% year over year during the same period to hit $14.4 billion, while the total payment volume flowing through its payments platform, Mercado Pago, soared by 71.5% year over year to hit $33.8 billion.

Pedro Arnt, CFO of MercadoLibre, has detailed how the company continues to invest and expand in its logistics infrastructure, thereby offering merchants and customers better service levels and higher levels of efficiency in shipping. Peer-to-peer (P2P) payments also increased in importance, and the company was able to capture this shift using its mobile wallet, which saw active payers grow to almost 14 million.

The shift to digital transactions and payment represents a strong tailwind for MercadoLibre. Its market leadership and dominance in Latin America is also a boon for investors as the network effect will enable the company to continue growing and adding users.

For those who enjoy a hot cup of cappuccino, there's probably no better place to grab one than Starbucks ( SBUX -0.16% ). Although the coffee giant was hit hard by pandemic-related store closures in the early part of 2020, it has witnessed a faster-than-expected recovery in its two key markets: the U.S. and China. For its latest quarter, revenue was down just 8.1% year over year, while global comparable-store sales declined by 9%.

During its recent investor day, management presented an ambitious plan: grow its current crop of stores from 33,000 to 55,000 by 2030. The plan includes growth in both Starbucks' home market in the U.S. as well as in China. New store formats that allow curbside pick-up will be rolled out to nearly 2,000 stores across the U.S. by the end of fiscal 2021, according to CEO Kevin Johnson. The company has demonstrated its ability to modify its store layout to adapt to new habits brought about by the pandemic. And the continued growth in Starbucks Rewards members is a validation of the company's digital flywheel strategy.

Starbucks is also going big in two areas: sustainability and plant-based foods. Its new Coffee Innovation Park, set to open in 2022, will incorporate elements of sustainable manufacturing and smart supply chain management to achieve energy and water-efficient production. In partnership with Impossible Foods, a plant-based food manufacturer, Starbucks has introduced the Impossible Rendang Pie in Singapore, along with plans to introduce more such plant-based foods in future. And in the U.S., more non-dairy drinks using oat milk and almond milk have been introduced. The future looks bright for the business as it executes its long-term growth strategy and continues to maintain its dominant market share within the industry.