Please ensure Javascript is enabled for purposes of website accessibility
Free Article Join Over 1 Million Premium Members And Get More In-Depth Stock Guidance and Research
By Alex Carchidi - Dec 31, 2020 at 10:07AM

These companies made millions by developing equipment for life-saving care, and enriched shareholders too.

Every healthcare facility is backed by an army of medical device companies. From critical hardware like cardiac monitors to more mundane gear like scalpels for surgery, it's no surprise that their stocks can perform so well. Their products are always in demand, and nearly always room for innovation.

Beyond that, there's no single thread that ties together the top-performing device stocks that I'll discuss today. Let's dive in and see why these companies were able to win for their shareholders amid the chaotic backdrop of 2020. 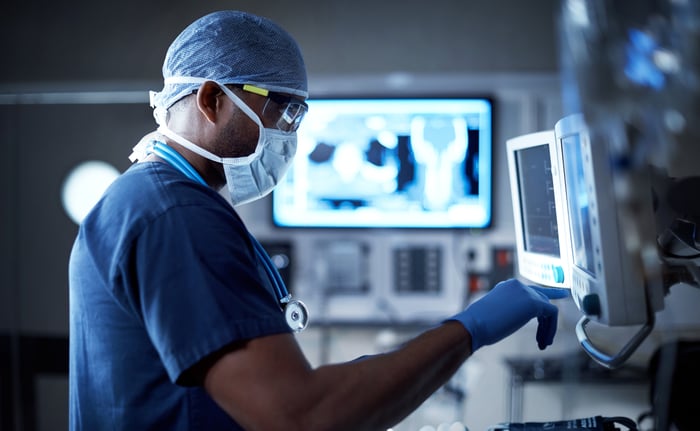 What's the best way for a medical device company to contribute to the rollout of coronavirus vaccines? For Retractable Technologies ( RVP -6.74% ), it's selling syringes, which led the stock to expand by nearly 602% in 2020. The U.S. Department of Health and Human Services placed an order for its syringes earlier in the year that was worth more than $83 million, causing sales to skyrocket and quarterly revenue to increase by more than 132% compared to 2019. Retractable is profitable and nearly debt-free, so its new proceeds can be reinvested directly into expanding its core syringe business or developing new products.

That's great news for shareholders, especially because the prospect of continuing 2020's growth into 2021 looks difficult. If the government's need for new syringes tapers, the company's revenue growth could hit a wall. Its international sales are already falling off sharply, which management attributes to the ebbing of an unusually high level of demand last year. Investors should tread carefully and keep an eye on management's attempts to expand market penetration before making a purchase.

iRhythm Technologies ( IRTC -6.42% ) makes wearable biosensors that detect when a patient's heart is in arrhythmia, giving doctors more time to intervene. While it isn't profitable yet, its revenue is growing rapidly, and the stock grew by 240% this year. This expansion stopped after bad news from Medicare regarding reimbursements for its devices, but it could soon resume.

Aside from reporting year-over-year revenue growth of 31.6% in the third quarter, the stock's catalysts this year included raising $220 million in a public offering and shaking up its leadership. The company recently got a new CFO, and it also recruited a new CEO who will join early next year. The incoming CEO, Mike Coyle, has a long history of executive-level work in the cardiac device space. That's sure to come in handy as iRhythm looks to recover from the speedbump that the pandemic inflicted on its revenue growth in the first half of the year.

After its stock popped by 242% in 2020, AdaptHealth ( AHCO 5.49% ) remains near its all-time high. The company's home health products are selling rapidly as a result of the pandemic, leading to year-over-year net revenue growth of 108% in the third quarter. And while the company is still narrowly unprofitable, it has raised a lot of cash this year -- and put it to good use.

Throughout 2020, AdaptHealth acquired a handful of businesses, including a medical supply company, a medical device distributor, and a diabetes management company. But the biggest move was to buy AeroCare, a home respiratory care company, for $2 billion in cash and stock. If the AeroCare purchase lives up to management's expectations, it will result in $50 million in synergies per year, substantially increasing AdaptHealth's trailing revenue of $857.5 million. Pay attention to the earnings reports after the deal closes early next year to see if the company is worth an investment. 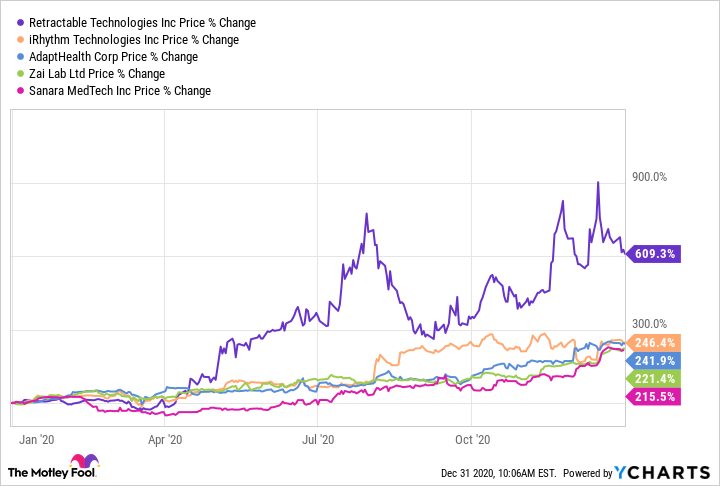 Zai Lab ( ZLAB -8.50% ) may not have made any millionaires this year, but with growth of more than 221%, it certainly didn't disappoint investors. The biotech launched a pair of therapies for ovarian cancer and glioblastoma in China, and it also advanced quite a few of its late-stage pipeline projects aiming to treat other cancers. Interestingly, its Optune therapy device for glioblastoma uses electrical fields to disrupt tumor cell division. As cool as that is, the company still isn't profitable.

Moving forward, it plans to expand its research facilities in the U.S. while advancing its other late-stage programs. Expect it to forge collaborations with North American companies to commercialize its therapies outside of its home market. If you're looking for an opportunity to invest, it might be better to do so sooner rather than later, as the company is only becoming more valuable over time.

Sanara MedTech ( SMTI -2.58% ) burgeoned by 215% in 2020 thanks to getting its stock uplisted onto the Nasdaq exchange and posting year-over-year revenue growth of 48% in the most recent quarter. It also launched a new wound gel that may be effective at removing the coronavirus and other microbes from the surface of the skin.

In August, Sanara announced that it would start to develop the capabilities it needed to provide digital diagnosis and treatment to patients with certain skin wounds. Sanara's surgical and wound care products aren't enough to make it profitable yet, but its new initiative to bring its wound care expertise to telehealth just might be the key that it needs in the next few years. Still, potential investors should be wary that telehealth isn't exactly in Sanara's traditional sphere of competency, so the company will need to prove itself before it's worth investing.

Why iRhythm Technologies Stock Skyrocketed 248% in 2020