Please ensure Javascript is enabled for purposes of website accessibility
Free Article Join Over 1 Million Premium Members And Get More In-Depth Stock Guidance and Research
By Matthew DiLallo - Jan 3, 2021 at 10:16AM

This mega-trend could power huge total returns for this trio.

A lot can change in a decade. For example, ten years ago, it cost between $140 to $150 per megawatt-hour (MWh) for solar energy, and that's with the benefit of investment tax credits. However, by 2020, that cost was down to $25 to $35 per MWh, making solar cheaper than fossil fuels. That downward trend in solar energy costs should continue over the next decade, as it's on track to be the lowest cost form of bulk energy even after adding battery storage.

Solar energy capacity additions are also on track to accelerate over the coming years. The industry expects to install an average of 10 gigawatts (GW) of new capacity per year through 2022, which should rise to an average of 18 to 20 GW annually in the 2023 to 2030 timeframe. 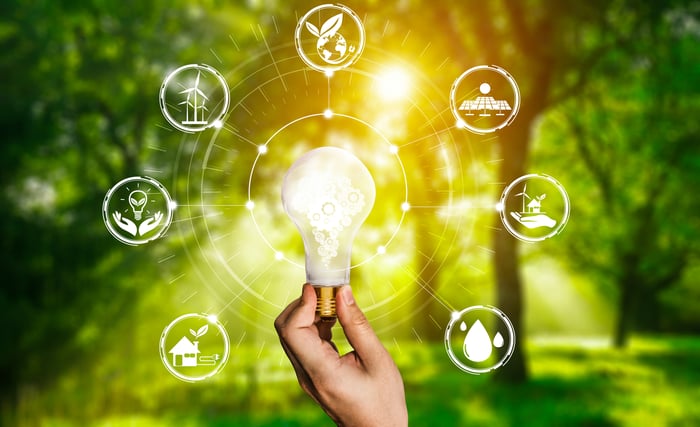 Brookfield Renewable is currently one of the global leaders in hydroelectric power. However, it sees the brightest future in solar thanks to the dramatic decline in costs, which has significantly improved the economics of developing new solar energy projects. Brookfield wrote in a recent shareholder letter: "We believe it is possible that in ten years from now the majority of the production capacity of Brookfield Renewable will be solar capacity. It is not that we do not believe in wind or hydro, but the growth in solar and the ability for us to develop and earn strong risk-adjusted returns should enable us to grow our solar operations at a far greater pace."

A bright future lies ahead

First Solar is a leading developer of thin-film solar panels, which are ideal for utility-scale projects. The company currently has a backlog of contracts totaling 12.2 GW of system sales and 8.3 GW of additional mid-to-late stage opportunities in the pipeline. For perspective, the company's current manufacturing capacity is 5.5 GW meaning it has years of future sales lined up.

Meanwhile, First Solar has one of the best balance sheets in the sector, boasting a $1.4 billion net cash position at the end of the third quarter. It has unparalleled financial flexibility to continue expanding its manufacturing capacity to meet accelerating demand while investing in developing even better panels. That should enable it to stay one step ahead of its rivals and capture a significant share of the solar panel market in the coming decade.

This renewable energy behemoth is only going to get bigger

NextEra Energy is already the global leader in producing power from the wind and sun. However, it currently has 15 GW of renewable projects in its backlog, which is larger than its existing portfolio. A significant portion of those new additions are solar energy projects due to the falling costs of panels and energy storage.

That extensive backlog leads NextEra Energy to believe it can grow its earnings per year at a 6% to 8% annual pace through at least 2023. Meanwhile, given its expertise and financial strength, it should be able to continue capturing opportunities to grow at an above-average rate over the next decade. That could give it the power to continue outperforming the market. That has been the case over the past decade as NextEra has generated a more than 500% total return, more than double that of the S&P 500.

Well-positioned for the solar energy mega-trend

Solar energy is starting to shine. It's on track to become the lowest cost form of near-firm bulk power thanks to the dramatic decline in costs for panels and battery storage. Companies focused on the industry appear poised to grow at a brisk pace over the coming decade, led by Brookfield Renewable, First Solar, and NextEra Energy. That makes them great stocks to buy and hold through at least 2030.