Please ensure Javascript is enabled for purposes of website accessibility
Free Article Join Over 1 Million Premium Members And Get More In-Depth Stock Guidance and Research
By Rachel Warren - Jan 5, 2021 at 7:08AM

These stocks can handle whatever the new year has in store.

Healthcare was one of the few industries to emerge from 2020 relatively unscathed in comparison to much harder-hit sectors such as retail, travel, or energy. The top-performing healthcare stocks in 2020 have a few prominent characteristics. Many of them rely on a diversified portfolio of products that attract consistent demand or target specific consumer populations, such as the rare disease market or diabetes care.

Whether or not you're concerned about another market crash in 2021, it's still important to limit your portfolio's exposure to excess risk by filling your basket of stocks with recession-proof buys. And if you're the type of investor who likes to spice things up with a handful of riskier stocks, these pandemic stalwarts can provide some equilibrium to the rest of your portfolio.

Let's take a look at three recession-proof healthcare stocks that were at the top of their game in 2020 and are excellent buys for 2021. 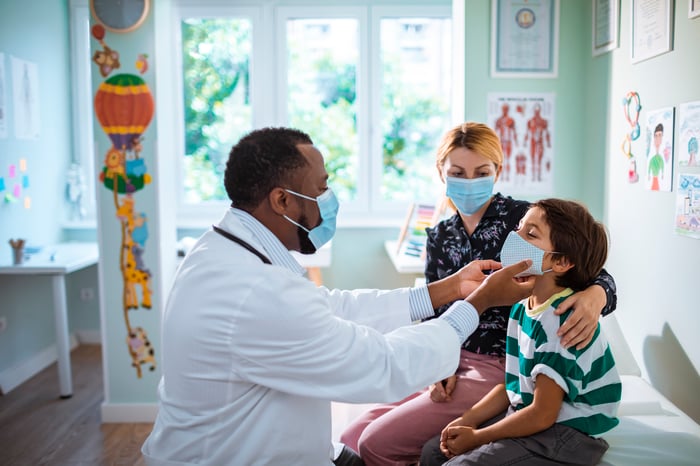 Shares of DexCom ( DXCM -1.48% ) have gained nearly 350% over the past five years and shot up 65% in the last 12 months alone. DexCom makes continuous glucose monitoring (CGM) devices, and its flagship product is the G6 CGM system. The company is one of the most prominent players in the CGM market. Its system "sends glucose readings to your compatible smart device and receiver every five minutes with no fingersticks necessary" and "features a 10-day wear sensor that is designed to be water-resistant and easy-to-insert with an auto-applicator."

The company is also planning to release its G7 CGM device in the latter part of 2021. The new system was originally slated for release in 2020, but manufacturing and other delays caused by the coronavirus pandemic held back its launch. The G7 will be released with a 10-day wear sensor like the G6, but management said on the company's third-quarter earnings call that it expects to increase the device's wearability period. Given the astronomical success of the G6 CGM device, the next-generation system should be poised for equal or even greater success.

DexCom has faced challengers to its foothold on the CGM device market over the past few years, particularly in Abbott Labs' ( ABT -1.76% ) FreeStyle Libre system, but its balance sheet continues to reflect rock-solid growth. In the 2016-2019 period, the company reported double-digit revenue increases every year: 43%, 25%, 44%, and 43%, respectively.

DexCom's financial performance has been equally impressive throughout the pandemic. The company reported first, second, and third-quarter year-over-year revenue increases of 44%, 34%, and 26%, respectively. DexCom also has about $2.6 billion in cash and marketable securities, and only $506 million in total current liabilities, so the company doesn't have any concerning debt issues to contend with in 2021. DexCom isn't the only strong presence in the CGM device market, but when you consider that nearly half a billion people worldwide have diabetes, it doesn't need to be. The company meets a constant and ever-growing need with its life-saving devices. For this reason, DexCom is a recession-proof stock that you can easily buy and hold for the next few decades. 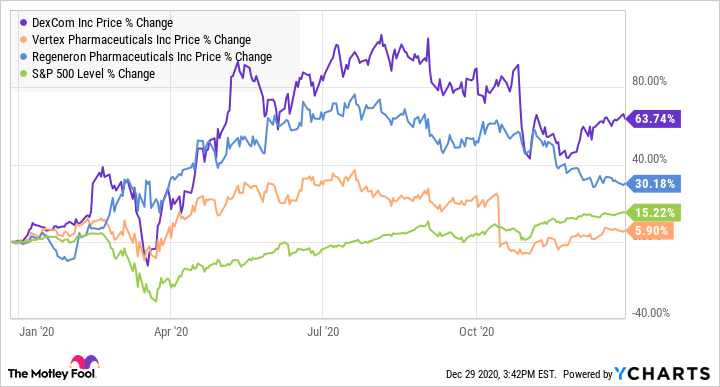 Vertex Pharmaceuticals ( VRTX -1.67% ) also targets a very specific niche in healthcare with its rare disease portfolio comprised entirely of cystic fibrosis (CF) drugs. The company has its finger on the pulse of the CF drug market, most notably with its triple-combination therapy Trikafta. The U.S. Food and Drug Administration's (FDA) approval of the drug in October 2019 was monumental, making Trikafta the first-ever prescription medicine that roughly 90% of CF sufferers can take. Vertex has three other approved products in its stable besides Trikafta: Orkambi, Symdeko, and Kalydeco, all of which have achieved considerable commercial success.

Vertex Pharmaceuticals has a solid track record of consistent, above-average revenue growth. In 2019, its top line spiked 37% year over year.  And the pandemic hasn't slowed Vertex's growth at all. The company reported product revenues of approximately $1.5 billion in each of the first three quarters of 2020, representing year-over-year increases of 77%, 62%, and 62%. Trikafta has quickly achieved blockbuster status, and amassed $2.8 billion in total product revenue in the first nine months of 2020. Orkambi, Symdeko, and Kalydeco raked in total product revenues of $700 million, $500 million, and $600 million, respectively, during this time frame.

Vertex Pharmaceuticals isn't resting on its laurels. The company continues to seek expanded approvals for its existing panel of drugs while pursuing additional growth opportunities. Management announced on Dec. 21 that the FDA had issued new indications for Trikafta, Kalydeco, and Symdeko for CF patients with specific rare mutations. The company also inked a partnership agreement with Skyhawk Therapeutics on Dec. 22, "aimed at the discovery and development of novel small molecules that modulate RNA splicing for the treatment of serious diseases." This new collaboration will only further Vertex's presence in the rare disease treatment space, as should its robust pipeline of drug candidates for conditions including CF, sickle cell disease, Duchenne muscular dystrophy, type 1 diabetes, and a rare blood disorder called beta thalassemia.

If you're in the market for a recession-proof healthcare stock with minimal competition to affect future growth over the next five to 10 years, now looks like a great time to jump on this screaming buy.

Shares of Regeneron ( REGN -2.73% ) once nearly soared 80% in 2020, before exiting the year with a 27% increase. The company reported double-digit year-over-year revenue growth in each of the first three quarters of 2020 (33%, 24%, and 32%), thanks in large part to the continued success of Dupixent. The blockbuster drug, which is approved to treat several conditions including moderate-to-severe atopic dermatitis, is the product of Regeneron's long-standing partnership with French company Sanofi ( SNY -1.33% ). Sales of Dupixent alone raked in $855 million in the first quarter, followed by $945 million in the second quarter and $1.07 billion in the third. Regeneron's Eylea, a medication used to treat macular degeneration, has also been a major cash cow. The drug brought in well over $3 billion in sales during the first nine months of 2020.

Regeneron's COVID-19 antibody cocktail could also turn out to be a significant source of income for the company over the next few years. The cocktail, which is a mixture of two monoclonal antibodies called casirivimab and imdevimab, was authorized for emergency use by the FDA on Nov. 21. The authorization applies to adults with mild or moderate cases of COVID-19, and children aged 12 and above who weigh 40 kg or more, tested positive for the virus, and are in danger of becoming seriously ill or requiring in-hospital treatment. The antibody cocktail is currently enrolled in numerous ongoing late-stage clinical trials assessing its safety and efficacy for both hospitalized and non-hospitalized patients, as well as to prevent infection after exposure to the disease.

Regeneron previously inked a $450 million contract with the U.S. government under the Operation Warp Speed program, so an initial batch of 300,000 doses will be provided to patients free of charge. However, Regeneron is planning to manufacture millions of additional doses in 2021 and beyond if its antibody cocktail gains regulatory approval. The company already reached an agreement with Swiss pharmaceutical company Roche ( RHHBY 0.93% ), who would make and distribute the antibody cocktail internationally if it is approved. With each dose of Regeneron's COVID-19 treatment costing an estimated $1,500, the company could easily have another blockbuster on its hands.

In addition to its current portfolio and potential success in the COVID-19 treatment space, Regeneron has a robust pipeline featuring a host of antibody therapies it's studying for the treatment of multiple myeloma, non-small cell lung cancer, heart failure, and more. And despite incurring higher-than-usual research and development costs during the third quarter, Regeneron still closed the three-month period with nearly $6 billion in cash and marketable securities, and just $2 billion in long-term debt. The company's balance sheet is in great shape, and it's growth potential over the next few years is huge, with or without the success of its COVID-19 antibody cocktail. Investors should consider buying in now before shares potentially spike even higher in the coming months.

2 Unstoppable Stocks to Buy and Hold for Decades

Got $1,000? These 2 High-Growth Stocks Are Screaming Buys Right Now