Democrats will control the White House and Congress now. That could be bad news -- or good news -- for makers of firearms and ammunition.

As the calendar turned over and the Jan. 20 Inauguration Day approached, promising to put a Democrat into the White House again, investors in the firearms industry seem to have sharpened their focus on the prospect of presumed new gun regulation in Congress. Adding to the anxiety, by Wednesday it became clear that any such legislation would have an improved chance of passage in Congress, as the Senate majority also swung in the Democrats' favor.

Ordinarily, you might think this would be bad news for stocks focused on guns and ammo, but in the real world, it often works like this: Gun customers see legislation on the horizon, and so they go out and buy guns and ammunition before they get banned (hint: they almost never get banned). This produces a sales spike and a bumper crop of profits for the gun stocks and, once the fear of regulation passes, the stocks go up.

It took a few years, but investors eventually caught on to this trend and as a result, Smith & Wesson stock gained 27% through Jan. 6, Sturm gained 20%, and Vista stretched out its gains for an additional day, peaking on Jan. 7 at a 25% gain. 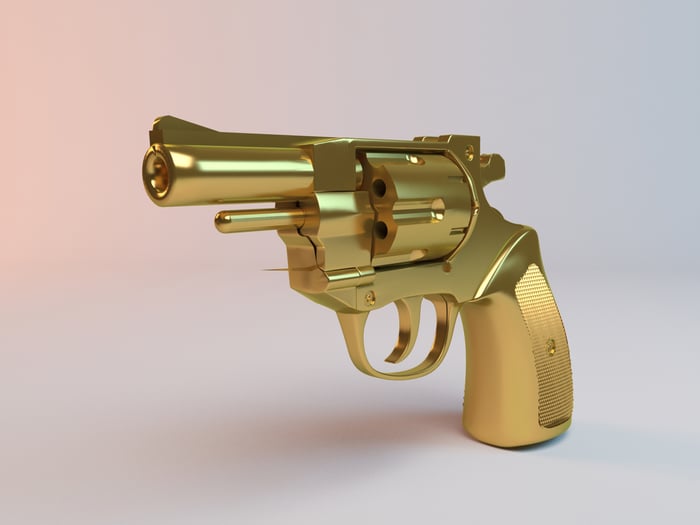 Today nothing much has changed in regards to actual company news or legislation proposed in Congress. But the stocks are all clearly experiencing a downdraft.

It's anybody's guess whether this is simply because investors have decided it's time to collect their windfall profits, or because they are afraid of new gun regulation after the violence in Washington, D.C., on Wednesday.

Guess right, though, and maybe you can predict when gun stocks will turn back up again.