Since Cathie Wood created Ark Invest in 2014, the fund has averaged annual returns of 31%. The outperformance continued in 2020 with Ark beating 99% of funds and its ARK Innovation ETF becoming the largest actively-managed ETF in the world.

Among the largest holdings in this innovation fund is Spotify Technology (NYSE:SPOT) -- a market leader in audio streaming. With this company more than doubling in value in 2020, is it too late to join Wood by investing in Spotify, or is it time to start a position? 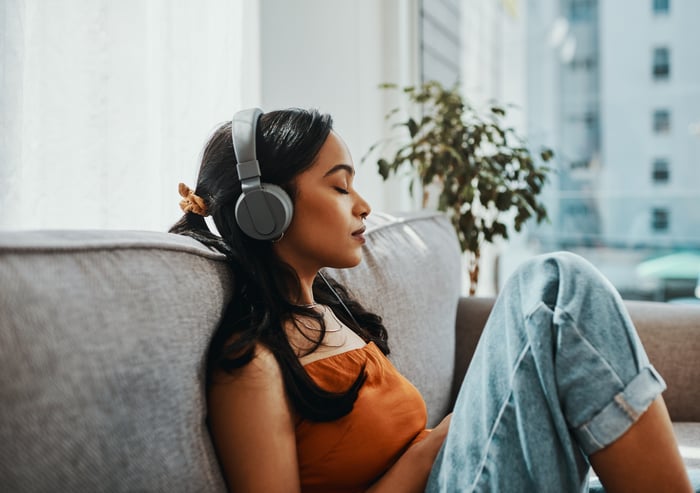 Succeeding financially and standing its ground

In Spotify's third quarter, revenue grew 14% year over year to roughly $2.42 billion. It's important to consider that the company posted this growth despite a significant, pandemic-induced pullback in advertising spend from many of its customers.

Encouragingly, Spotify managed to report year-over-year growth throughout the pandemic, and its recovery accelerated during the third quarter. The strong results led to operating cash flow spiking 72% year over year and free cash flow more than doubling in the latest period.

While COVID-19 has hit Spotify's advertising business, demand for its product offerings is still enjoying brisk expansion with monthly active users (MAUs) up 29%. This hints at the company's ability to further increase its pace of growth as advertising budgets bounce back, and its audience continues to grow.

Companies like Apple and Amazon are spending liberally to win market share in music streaming but so far with limited success. Spotify boasted 144 million premium subscribers as of Sept. 30, while estimates for Apple Music come in at roughly half that figure, and Amazon is even further behind.

There is certainly formidable, deep-pocketed competition, but Spotify is coping with it well.

While Spotify has traditionally been a music streaming platform, the company has committed strategically and financially to building out its podcasting business in the past year. It signed behemoths in the entertainment industry like Kim Kardashian and Joe Rogan to contracts worth hundreds of millions of dollars in 2020 -- and for good reason.

The podcasting industry will enjoy an estimated compound annual growth rate of 27.5% through 2027, accompanying 17.8% growth for music streaming, according to Grand View Research. That's quite the one-two punch of healthy categories to play in for Spotify.

And according a MIDiA Research survey, as of the middle of last year, Spotify claimed a leading market share in podcasts for the first time. It attracted 42% of podcast listeners to its platform, while Apple Music claimed 32% in second place. More ears will translate into more advertising and subscription dollars, and with podcasting still in the early innings of its expansion, this is fantastic news for Spotify.

Other competitors like Amazon have made recent acquisitions in the podcasting space and should be taken seriously as competition. But Spotify's numerous acquisitions of exclusive content allow the company to differentiate its product in an increasingly crowded field.

Should you join ARK and invest in Spotify?

Spotify operates as the market leader in two quickly growing categories. Its competitive landscape is filled with intimidating names, but it has proven itself by rising above these challengers, including the world's largest companies.

For these reasons, I believe Spotify is well-positioned long term. Cathie Wood and Ark are on to something here with their bullish view of the company.