Think about all that happened in 2020. A global pandemic that caused the first U.S. recession in more than a decade. Massive unemployment. A contentious presidential election. Control of the U.S. Senate in doubt. And yet the S&P 500 index jumped 16%.

How could stocks perform so well in the midst of such chaos? There's a simple reason: Investors are always looking ahead. The market went up because they expected that the storms would calm in the not-too-distant future. It's understandable, then, that many (including me, by the way) have projected an extension of the bull market under the incoming Biden administration.

The reality, though, is that no one knows for sure what's next on the horizon. It's quite possible that the stock market will go down in 2021 instead of up. The good news for investors is that there are solid stocks that should still perform well if that happens. Here are three stocks you can buy for a potential Biden bear market. 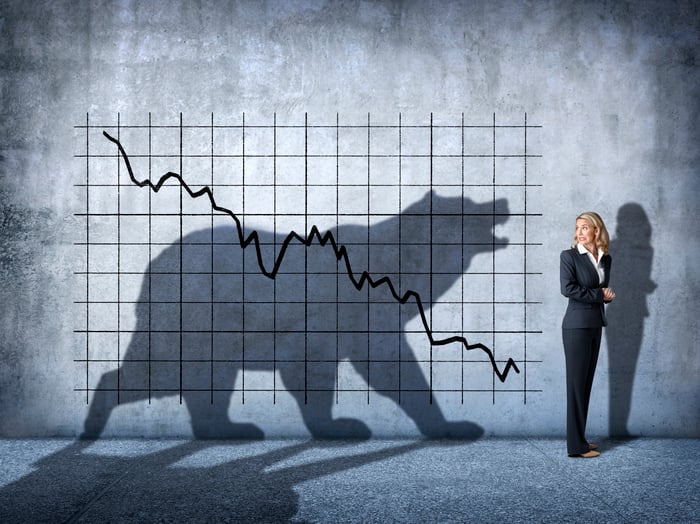 Few stocks are as resilient during tough times as Dollar General (NYSE:DG). Shares of the discount retailer soared 35% last year.

The COVID-19 pandemic actually boosted Dollar General's sales. Its stores carry the staple goods that are needed regardless of what's going on in the world. Customers shopped at Dollar General because its stores are conveniently located (75% of Americans live within five miles of a Dollar General store) and its prices are low.

Those advantages aren't temporary ones. And Dollar General is working to increase its attractiveness to consumers. For example, the company is rolling out DG Pickup, where customers can buy on an app then pick up products in stores. It's also launched new Popshelf stores that target higher-income customers.

Don't think that Dollar General is just a bear market play, though. Between 2014 and 2019, years when the U.S. economy was steadily advancing, the stock rose nearly 160%.

Brookfield Renewable (NYSE:BEP) (NYSE:BEPC) is another stock that performed really well during the turbulence of 2020 with its shares skyrocketing 74% higher. That followed an even more impressive gain of 80% for the renewable energy stock in 2019.

Can Brookfield Renewable keep its momentum going even if there's a Biden bear market? Absolutely. Consider that renewable energy production increased during the economic downturn last year while overall energy production fell. President-elect Joe Biden has promised to put the U.S. on a path to significant carbon emission reduction. That's great news for Brookfield Renewable, one of the world's leading renewable power companies.

The reality, though, is that Brookfield Renewable would likely deliver solid gains even if Biden wasn't a champion of clean energy. Wind and solar are already the most cost-effective sources of bulk power generation. That cost advantage is likely to grow in the coming years.

Brookfield Renewable expects to give investors average annual total returns of close to 15% over the long term. With the company's development pipeline set to nearly double its capacity, I think the stock is poised to be a winner regardless of what the overall stock market does.

Viatris (NASDAQ:VTRS) didn't officially exist until Nov. 16, 2020. That's when the combination of Pfizer's Upjohn unit and Mylan closed. Despite its brief history, though, Viatris should be well-positioned to weather a down market.

For one thing, Viatris' business doesn't depend on how the economy is doing. The company markets generics, older brand drugs, biosimilars, and over-the-counter medications that people routinely need.

The stock is also ridiculously cheap right now. Viatris' shares trade at a super-low 4.6 times expected earnings. I doubt that it's going to get much more inexpensive than that even if the overall stock market tanks.

Viatris isn't likely to deliver impressive revenue growth anytime soon. However, the company does anticipate steady earnings growth over the next few years as it realizes synergies from the Upjohn-Mylan merger. In the meantime, Viatris plans to initiate a dividend soon with a yield that will probably be in the ballpark of 5%. Viatris is a stock that will pay you to wait during a potential Biden bear market.