Oil prices started 2021 off with a bang, rallying nearly 8% during the first week of the year, thanks to some unexpected additional support from Saudi Arabia. That pushed crude above $50 a barrel for the first time since last February. While all oil companies will benefit from higher oil prices, some will produce a gusher of cash if crude maintains its current level above $50 a barrel. Here's a look at five oil stocks that could prosper this year if oil stays above this crucial price point.

The deal will pay even bigger dividends

ConocoPhillips (NYSE:COP) agreed to buy rival Concho Resources (NYSE:CXO) in an all-stock deal valued at $9.7 billion in October. The primary driver is that the combined company can reduce costs, enabling it to generate more cash at lower oil prices. For example, at $40 oil ConocoPhillips/Concho can produce a combined $7.5 billion to $7.8 billion in cash flow from operations. That's enough money to fund the capital needed to maintain their current production level and Conoco's 3.8%-yielding dividend with room to spare. At $50 oil, the combined company can produce an additional $3 billion in cash. It could use that money to restart its growth engine by drilling more wells to boost production and return more cash to shareholders via share repurchases and special dividends. 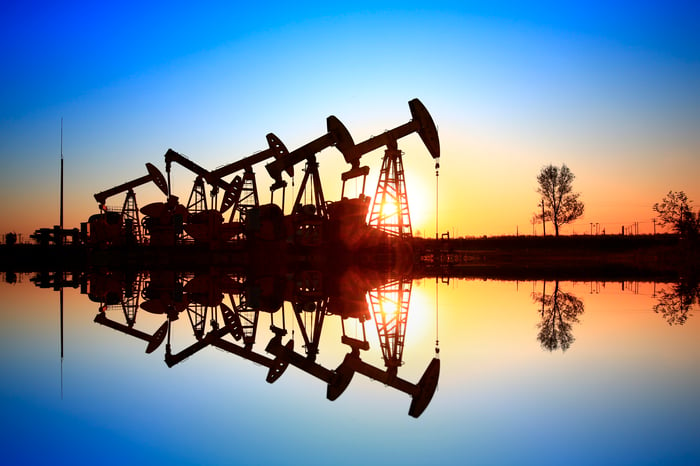 A gusher of dividends could be ahead

Devon Energy (NYSE:DVN) recently closed its merger with WPX Energy. That deal also lowered its costs so that it could operate just fine at $40 oil. It could produce enough cash to maintain its production and base dividend that currently yields 2.4% at that price point with room to spare. Devon Energy expects to use any free cash flow it produces at higher oil prices to improve its financial strength and pay a variable dividend. At $50 oil, the company could generate as much as $1.5 billion in free cash. Devon said it could return up to 50% of its excess cash to investors via special dividends, implying the potential for a monster payout this year.

The flexibility to flourish

EOG Resources (NYSE:EOG) only needs oil to average $36 a barrel this year to maintain its current production rate and 2.5%-yielding dividend. With oil prices well above that baseline level, it's on track to produce a gusher of free cash flow. It could use those funds to repay debt, buy back shares, boost its dividend, or restart its growth engine. To put its options into perspective, even if it ramped its drilling activities to grow its production by 8% to 10%, it would still produce more than $2 billion in free cash at $50+ oil. That gives it lots of flexibility to enhance its balance sheet and return more cash to investors.

Pioneer Natural Resources (NYSE:PXD), like Devon and ConocoPhillips, is merging with a peer to reduce costs. The combined company believes it can generate enough cash at a mid-$30s oil price to maintain its 1.7%-yielding dividend and current production pace. It's on track to produce a massive amount of free cash if oil stays in the $50s this year, and it expects to use those funds to reduce debt and follow Devon in adopting a variable dividend framework. Those special payouts could significantly exceed its current base dividend.

Poised to get real friendly with shareholders in 2021

Marathon Oil (NYSE:MRO) plans to be very disciplined in 2021. At $40-$45 oil, it expects to reinvest up to 80% of its cash flow to maintain its production and use the other 20% to enhance its balance sheet and support its recently reinstated base dividend that currently yields 1.6%. Above that level, the company intends to allocate at least 30% of its cash flow toward improving its financial profile and shareholder-friendly activities like share buybacks and special dividends. With crude oil currently in the $50s, Marathon Oil could be very shareholder-friendly this year.

If oil prices hold up, 2021 could be a very good year for oil stocks

Oil companies have spent the past several months focused on reducing costs, driven in part by a merger wave. As a result, most are on track to generate enough cash at $40 oil to maintain their current production rates and dividends with room to spare, meaning they can produce a gusher of free cash at $50 oil. While some could use it to boost their output, most plan on returning that windfall to shareholders via share buybacks and special dividends, which could richly reward their investors in 2021.