Please ensure Javascript is enabled for purposes of website accessibility
Log In Help Join The Motley Fool
Free Article Join Over 1 Million Premium Members And Get More In-Depth Stock Guidance and Research
By Jason Hawthorne - Jan 19, 2021 at 7:00AM

These stocks could be set for big gains in 2021 even after huge returns last year.

Amidst last year's exuberance, many stocks had fantastic returns, but Novavax (NVAX -8.57%) and Fiverr (FVRR -1.84%) stand out as especially noteworthy. Not only were they two of the best-performing stocks among those with a market cap above $200 million, what was happening in their business gives investors a lot to look forward to in 2021.

Novavax shares climbed almost 2900% in 2020, thanks to several waves of funding and promising early stage data for a COVID-19 vaccine candidate. To design, develop, and manufacture the drug, the company initially received $388 million from the Coalition for Epidemic Preparedness Innovations (CEPI) in May. That was followed by $1.6 billion from the U.S. government's Operation Warp Speed (OWS) program in July.

That's a huge influx of capital for a company that entered the year with a market cap around $130 million. Management is hoping to parlay the funding, and previous work on vaccines for similar viruses SARS and MERS, into an approved vaccine to help end the pandemic. 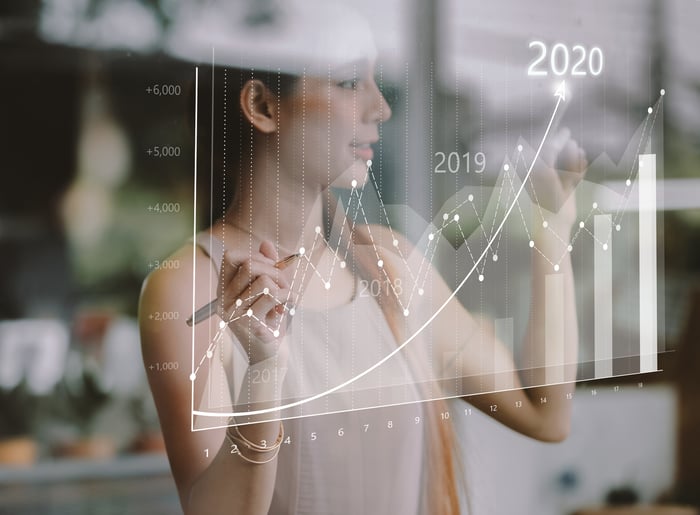 Despite twice delaying the start of its phase 3 study for the COVID-19 vaccine, Novavax finally began enrolling volunteers at the end of December. If the timeline matches that of Pfizer and Moderna, investors can expect data to be announced in about three months.

The company has agreements in place to deliver around 300 million doses to several countries, including the U.S., once it receives authorization. That's a drop in the bucket compared to the two billion doses of annual capacity management is expecting to eventually have. For a 33-year-old company with no products on the market, it's no wonder the stock performed so well last year. If all goes according to plan, including approval of a vaccine for seasonal influenza that has been shown to outperform the current market leader, shareholders can expect another year of outstanding returns.

Fiverr is a freelance marketplace where people can sell their services to businesses or other ordinary people. The company's goal is to make the process of finding and working with a freelancer as easy as buying something on Amazon.com. This comes at a perfect time, as companies have adapted to the pandemic by leaning on a more remote and flexible workforce. Fiverr was already growing nicely coming into 2020, posting greater than 40% revenue growth in each of the previous two years. However, growth accelerated throughout last year, coming in at 44%, 82%, and 88% in the first three quarters, respectively. That accelerating revenue is one big reason the stock was up 730% last year.

Another reason is how long that growth could continue. Management estimates the total addressable market at $100 billion, and expects 2020 sales of just $190 million, a small fraction of the opportunity. Marketplaces get stronger as more buyers and sellers join because each is more likely to find what they are looking for: Talent for buyers and gigs (or jobs) for sellers.

That dynamic is clearly playing out for Fiverr in two ways. First, active buyers grew 37% year over year for the third quarter ending Sept. 30. Second, the spend per buyer continued its steady increase since 2012. That double-barreled growth requires little effort on the company's part. In fact, Fiverr has no sales force out convincing people to adopt the product. Instead, revenue comes from simply taking a cut of both sides of the transaction.

In this stock market environment, investors are paying up for growth, and Fiverr stock currently trades at a price-to-sales ratio of 55. That's about the same as highfliers Shopify and Zoom Video. With a market cap of only $10 billion, Fiverr has the potential to deliver much more upside than the others. Fiverr could become the marketplace of choice for the new gig economy. If that is how the story plays out, and the growth can be sustained, the stock may look cheap in hindsight.

Balance the greed and fear

The gains of Novavax and Fiverr might remind us of the late 90s, and we might also recall that the Nasdaq fell 77% from peak to trough over the next two years. That's not to say these companies will falter, but stock performance will correlate to business performance over the long term.

To be great investments, these companies will have to demonstrate sustained growth and move toward profitability as the businesses scale. That's something investors should look for in the year ahead as Novavax and Fiverr try to deliver on the lofty expectations baked into the stock prices.

3 Unstoppable Stocks That Can Double Your Money, According to Wall Street

Market Sell-Off: 2 Growth Stocks to Buy and Hold For 10 Years