Please ensure Javascript is enabled for purposes of website accessibility
Log In Help Join The Motley Fool
Free Article Join Over 1 Million Premium Members And Get More In-Depth Stock Guidance and Research
By Rich Smith - Jan 20, 2021 at 11:33AM

Initially, EHang stock seemed prepared to give back some of its recent gains, falling 13% in early trading. As of 11 a.m. EST, however, the stock seems to have found its updraft -- and is up 9%. Investors want to know: When today is done, will EHang be facing up or down?

Two weekends back, EHang conducted a successful demonstration of its autonomous aerial vehicles, flying passengers around and island in island in Guangdong Province, China. Local government officials stood in attendance, cheering the company along -- and they aren't the only ones who have been cheering.

Since news of the demonstration was announced, EHang shares have gone totally vertical, more than doubling in price through yesterday's close (including a better than 50% gain yesterday). 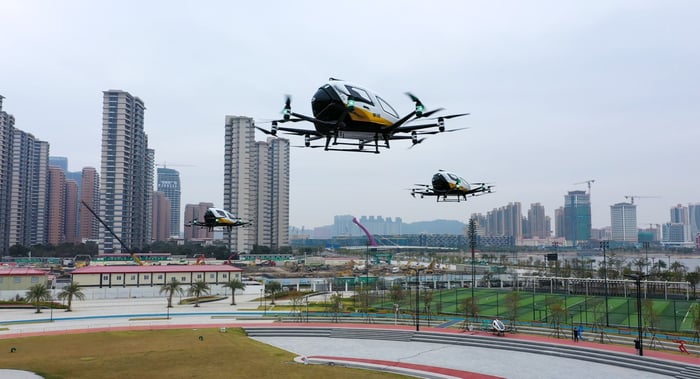 EHang has air taxis. But does it have profits? Image source: EHang Holdings.

Is there a reason for today's optimism -- something that could keep the momentum moving higher?

Not that I can see. In fact, there's no news about EHang on the wires today, and not a peep out of Wall Street either. That being said, EHang does seem to be forging a brand new industry here -- "robotic air taxis" -- and until a real competitor arises to challenge it, the company would seem to have this industry to itself. I can certainly see how investors would find that prospect exciting.

Now, let's see if the company can figure out a way to earn a profit from this new industry it's creating -- because so far, EHang has not done that.