Please ensure Javascript is enabled for purposes of website accessibility
Log In Help Join The Motley Fool
Free Article Join Over 1 Million Premium Members And Get More In-Depth Stock Guidance and Research
By Barbara Eisner Bayer - Jan 21, 2021 at 6:28AM

It's time to make money from loving your animals instead of just spending it taking care of them.

Americans love their pets. According to the Insurance Information Institute, pets are running the show in 85 million households. This number includes 63.4 million dogs, 42.7 million cats, 11.5 million fish, and 5.7 million birds. (That's a huge amount of kibble and seed.) But those dear creatures cost money, as they must eat, play, be groomed, and be looked after when they're ill.

Americans also love making money. So if you're a pet owner, you might want to follow famed investor Peter Lynch's advice: "Invest in what you know." And if you know and love animals, that means investing in the pet industry. 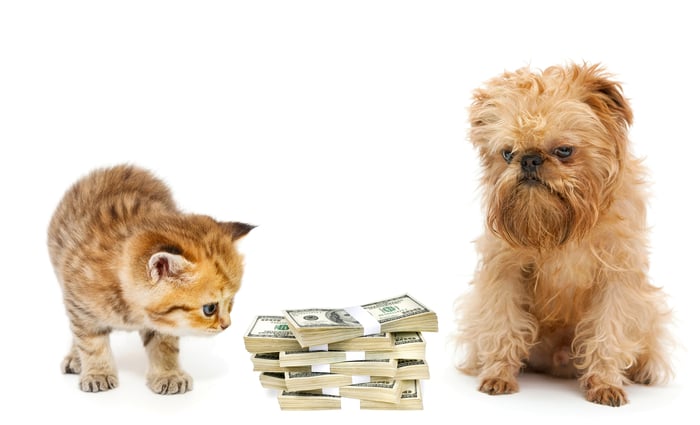 If you're wondering about the market, chew on this bone: In 2019, U.S. households spent $36.9 billion on treats, $19.2 billion on supplies and medicine, $29.3 billion on veterinary care, and $10.3 billion on boarding, grooming, insurance, training, and pet-sitting services. And the market of animal owners only increased during the coronavirus pandemic, when stay-at-home orders led people to adopt new furry friends to stave off loneliness.

Are you ready to invest in an industry that you can relate to? After all, you know how much you love your furry family member (or scaly, if you relish reptiles) and how much money you'll spend to make sure they stay healthy. There's even a way for beginners to feel comfortable putting their money where their snouts are -- by investing in an exchange-traded fund (ETF). Below are three investments where you can earn enough money -- and then some -- to take care of your pets for a lifetime. 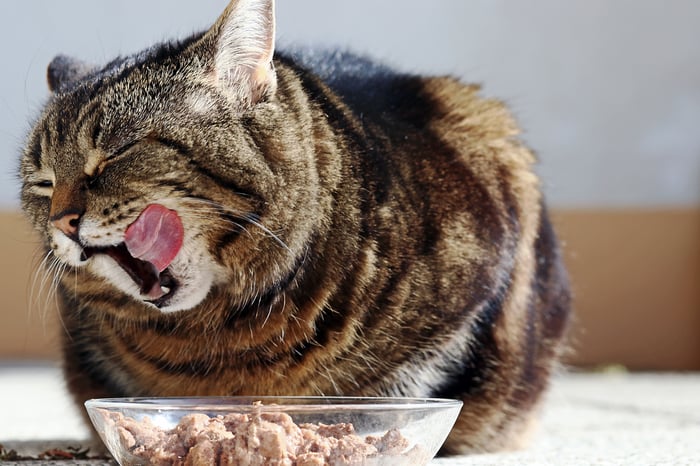 When it comes to supplying all your pet stuff, you've more than likely turned to Chewy (CHWY -2.00%) for many of your needs. The company sells food, treats, toys, clothing, vitamins, over-the-counter medical supplies, and crates and litter boxes, all online and delivered directly to your home.

Chewy already boasts 17.8 million customers, and 1.2 million of them were added in its recent third quarter. The company blew through earnings guidance, helped by its Autoshop program, which generated over $1.2 billion in sales and accounted for close to 70% of total revenue. Once those customers are getting their wares automatically delivered, they're unlikely to stop, as there's nothing as priceless as convenience.

Everything points to increasing sales -- which means increasing growth and increasing profits for shareholders. An investment in Chewy may even make you a millionaire if you buy and hold it for the long term.

If that isn't enough to make you drool over investing in Chewy, the company is a philanthropic powerhouse. In 2020, it donated more than $27 million in products to U.S. animal shelters and rescues and offers customers a "Wish List," where they can donate directly. 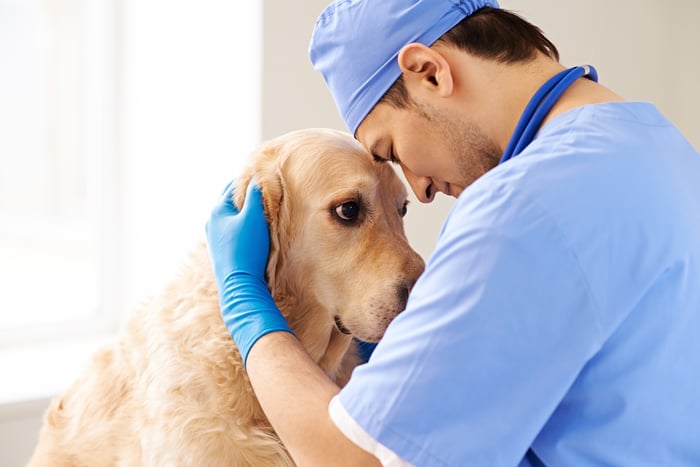 Who's a good boy? Why, your pet, of course. And that's why you'll go to the ends of the earth to make sure he stays healthy -- and that often means buying pet insurance. The best pet insurance company out there is currently Trupanion (TRUP 2.69%).

According to the CEO of Petplan (a competitor): "The [pet insurance] sector has grown at an average rate of 20% since 2014, yet we only have 1% to 2% of dogs and cats that are insured in the U.S. For comparison purposes, penetration in Europe ranges from 25% to 40%."

Trupanion believes that it could top $32 billion in annual revenue if it can duplicate the growth rate in Europe.

Two other things make Trupanion a truly yummy investment. First, veterinarians have been partnering with the company, which is why it's doing better than its competitors and should continue to do so. Second, it recently partnered with Aflac, the supplemental insurance company, which invested $200 million in the company. Aflac will market Trupanion's products in the U.S. and explore opportunities overseas. 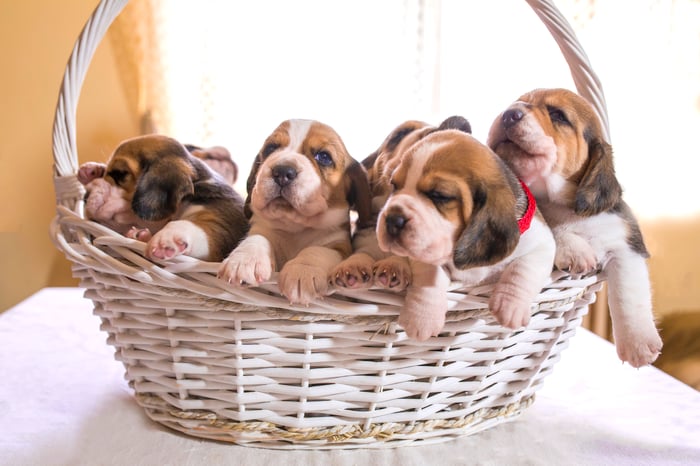 An ETF is a basket of stocks. Image source: Getty Images.

If you're a beginning investor and a bit reticent to dip your paws in the investing pool, consider putting some money in pet industry stocks through an exchange-traded fund (ETF), specifically, the ProShares Pet Care ETF (PAWZ -0.06%). Like a mutual fund, an ETF holds a basket of companies in a particular sector. But unlike a mutual fund, it has lower fees and trades on the major exchanges -- in the same way a stock would. Because you're investing in so many companies in an ETF, you're reducing the risk of putting your precious bones in just one garden.

The ProShares Pet Care ETF gives you the chance to invest in companies that range from insurance and diagnostic devices for animals to foods and pharmaceuticals. It currently holds around 25 companies, including the two mentioned above.

Whether you're an experienced or beginning investor, putting your money in a growing industry can have great financial benefits. If you're a pet lover, you can't go wrong following the advice of Mr. Lynch, since you're already spending significant amounts of money to take care of your pets. You may be making an investment in canines, but it's highly unlikely that these investments will ever become dogs.