Please ensure Javascript is enabled for purposes of website accessibility
Log In Help Join The Motley Fool
Free Article Join Over 1 Million Premium Members And Get More In-Depth Stock Guidance and Research
By Adam Levine-Weinberg - Jan 23, 2021 at 9:06AM

Netflix is performing quite well now, but its momentum might not last beyond the pandemic.

Shares of Netflix (NFLX 1.90%) leapt higher last week after the company posted strong fourth-quarter results and predicted a huge jump in earnings in the first quarter. In fact, Netflix stock touched a new all-time high on Wednesday, ending the day with a 17% gain.

There's no doubt that Netflix had a great year in 2020 and carries a lot of momentum entering 2021. However, the company will face a much more challenging business environment going forward. Combined with Netflix stock's high valuation, that makes the streaming video leader look like an unattractive investment today. 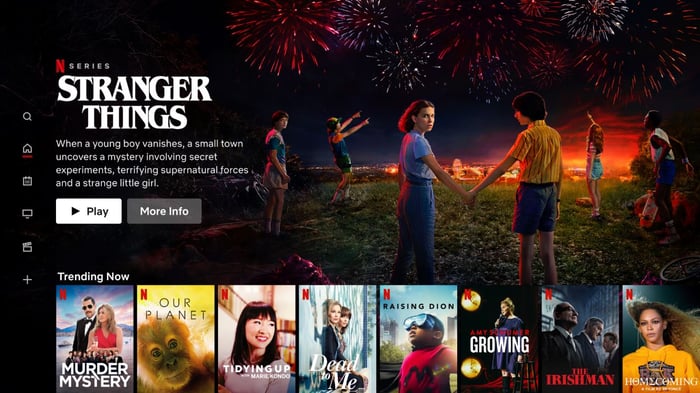 Earnings per share declined 8% year over year to $1.19, missing the average analyst estimate of $1.39. However, non-operating losses related to currency fluctuations accounted for this dip in EPS.

Looking ahead, Netflix projects that it will add 6 million net paid subscribers in the first quarter. That would mark a huge slowdown compared to recent years, even excluding its pandemic-powered subscriber gains a year ago. Netflix added 8.26 million net paid subscribers in Q1 2018 and 9.6 million in Q1 2019. However, the company estimates that operating income and EPS will nearly double year over year to $1.78 billion and $2.97, respectively. Prior to the earnings report, the analyst consensus had called for EPS of just $2.08.

A sea change in competition

During Netflix's Q4 earnings interview last week, management noted that it's hard to project near-term subscriber growth right now. The company may be taking a conservative approach to projecting its first-quarter net subscriber additions, recognizing that some growth was pulled forward into 2020 because of the pandemic.

Still, even if Netflix were to add 8 million subscribers this quarter, that would represent its lowest Q1 subscriber additions since 2017. That's worrisome since the competitive environment is going to get a lot tougher in the second half of 2021 and beyond.

The problem isn't just the arrival of Walt Disney's Disney+ and numerous other new streaming video services. Of course, those services compete with Netflix for time, attention, and consumer dollars. Furthermore, their relative positions will improve over the next couple of years as they build out their content libraries. (Pandemic-related production delays disproportionately hurt newer streaming services compared to Netflix.) But Netflix was able to post record subscriber growth last year even as Disney+ became an overnight sensation.

More importantly, as the pandemic recedes later this year and in 2022, consumers' entertainment options will multiply. People will be able to travel, socialize at bars and restaurants, attend concerts, etc. When they choose to stay at home, they will have a regular schedule of sporting events to watch -- unlike 2020 -- plus the Summer Olympics this year and the Winter Olympics in early 2022, assuming neither is canceled.

In short, the pandemic has provided a huge tailwind to the streaming video industry broadly. This tailwind will remain intact this quarter but will likely reverse by midyear, if not sooner. If Netflix is already struggling to grow as quickly as it did a couple of years ago, growth is likely to slow even further once the pandemic ends.

Too pricey for now

Netflix stock trades for a little less than 60 times the 2021 analyst EPS consensus of $9.76. That may seem reasonable given how quickly it has grown its revenue and expanded its margins in recent years.

Perhaps Netflix can beat the odds and continue growing its subscriber base rapidly after the pandemic ends, notwithstanding greater competition. If it can't, Netflix stock is unlikely to live up to its sky-high valuation.