Please ensure Javascript is enabled for purposes of website accessibility
Log In Help Join The Motley Fool
Free Article Join Over 1 Million Premium Members And Get More In-Depth Stock Guidance and Research
By Jim Halley - Jan 23, 2021 at 7:01AM

These three healthcare stocks all had a good year in 2020, and their businesses look to have plenty of growth again in 2021.

Royal Philips (PHG 0.04%), Cassava Sciences (SAVA 7.63%), and IDEXX Laboratories (IDXX 2.10%) are all worth looking into this year. All three healthcare stocks have trends working in their favor, driving share growth that far outstrips that of the S&P 500.

That momentum should carry over this year, for factors that extend beyond the pandemic: the rise in our elderly population bodes well for pretty much all healthcare companies; the use of diagnostic tools in medicine is expected to grow, along with the growth in spending on our pets. 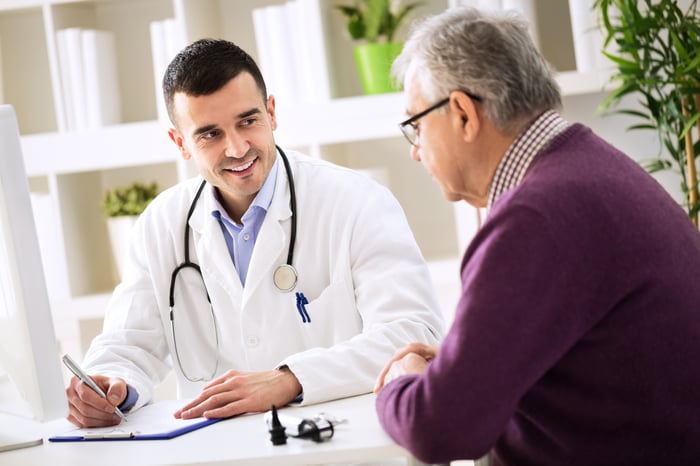 The company's stock is up more than 11% over the past year, and the increase in telehealth solutions that will outlast the pandemic will further boost the company's revenue. In December, Philips announced it that plans to buy BioTelemetry, a maker of remote cardiac diagnostics and monitoring services, for $2.8 billion, further enhancing its profile in connected care. BioTelemetry's board has approved the sale and it is expected to go through during the first quarter of 2021. Data Bridge Market Research estimated that the connected care market, driven by the push to use smartphones and wearable devices as healthcare diagnostic tools, will grow with a compound annual growth rate (CAGR) of 32% over the next seven years.

In the third quarter, Philips' sales were up 5% year over year. Its connected care segment, which includes patient monitors and ventilators, led the way with 36% sales growth year over year. Its largest segment, diagnosis and treatment, saw sales drop 3% year over year, thanks to fewer orders for diagnostic imaging and ultrasound, with fewer non-COVID procedures being done during the pandemic. The company also said its adjusted earnings before interest, taxes, depreciation, and amortization (EBITDA) margin increased to 15.4% of sales, compared to 12.4% of sales in the same quarter in 2019.

This year, the company said it expects 5% to 6% annual sales growth in all of its segments. Royal Philips said it expects its diagnosis and treatment and personal health segments to lead the way, with connected care sales growing at a lesser rate, though trends point toward more long-term growth in that segment.

The company has been smart about partnering to expand its business, whether it be working with Merck on personalized fertility treatments, or with GlaxoSmithKline on developing apps directed toward pregnant women, showing vaccine-preventable diseases. The company also signed 11 long-term health technology solutions partnerships with major hospitals from Vietnam, Germany, Indonesia, Tampa, Fla., and of course, the Netherlands.

Cassava Sciences has a potential blockbuster

Cassava Sciences, a clinical-stage biotech company, has no revenue yet. But the company's stock is up more than 25% over the past year. The reason is the company has a potential blockbuster Alzheimer's drug -- simufilam.

Cassava just reported results from its phase 2B study on the drug, showing 98% of patients with mild or moderate Alzheimer's in the study treated with simufilam for 28 days showed improvements in biomarkers of the disease's pathology, including improved memory, less neuroinflammation and less neurodegeneration with no safety issues. The company said it expects to complete a phase 3 study regarding the safety of the disease this year.

It's hard to stress enough what a big deal a successful Alzheimer's drug would be. According to the Alzheimer's Association, the disease, the most common form of dementia, affects more than five million Americans 65 and older. With the population of those 65 and over in the United States expected to grow from 56 million in 2020 to 88 million by 2050, the number with Alzheimer's would obviously grow. The association said by 2050, there will be 13.8 million people internationally living with Alzheimer's.

There is no drug on the market that has been shown to reverse or even slow the disease's progression, and no new drugs for Alzheimer's have been approved since 2003. It's possible a successful Alzheimer's treatment would be worth $20 billion a year by 2030 with no competitors, according to J.P. Morgan analysts. 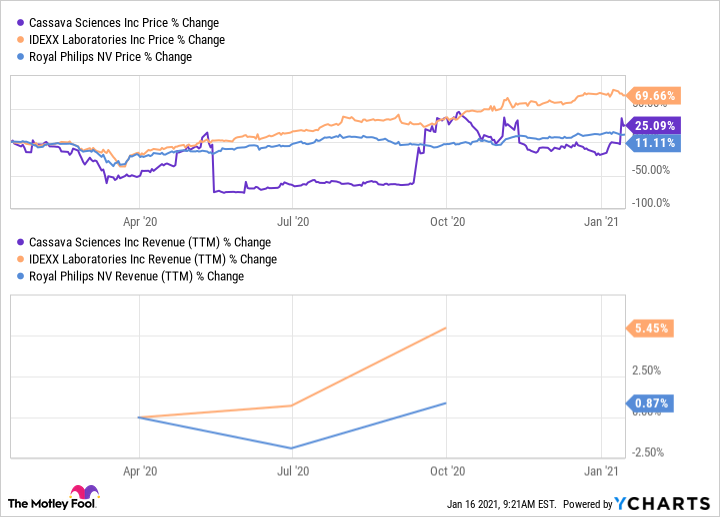 With more people working at home during the pandemic, pet-related business was off the leash last year. It makes sense. With Fido around them all the time, people are naturally more likely to spend money on their furry co-workers. The American Pet Products Association estimated people spent a record $99 billion on pets last year, including $30.2 billion on veterinary care.

IDEXX Laboratories is benefiting from that trend. Last year, the company, which specializes in veterinary diagnostics, veterinary practice software, and water microbiology testing, saw its shares rise more than 69% over the last year. The company has increased annual revenue for more than a decade and through three quarters of the year, was on track for another record revenue year.

The growth the company saw was in spite of some COVID-19 headwinds. While office veterinary visits were down earlier in the year because of COVID-19 related restrictions, they have bounced back in the second and third quarters, the company said. In the long term, one report said it expects the companion animal diagnostics market to grow with a compound annual growth rate of 8.82% through 2026.

All three should do well this year

Of the three healthcare stocks, I like IDEXX the best because it thrived during the pandemic, and long-term trends have already been pointing toward greater spending on pets. The company seems to be ramping up, with better revenue numbers each year, and I don't see that trend slowing anytime soon.

Royal Philips is also worth looking at because it has tailwinds that carried it through pandemic-related lockdowns and will continue to push business as connected care monitoring is anticipated to grow.

Cassava is potentially a huge stock, but the company has only one primary candidate that targes Alzheimer's disease, an area where many therapies have failed to win Food and Drug Administration approval. Investors who buy this clinical-stage biotech stock should know they are taking on a big risk.

Why Shares of Royal Philips Got Crushed Today