Please ensure Javascript is enabled for purposes of website accessibility
Log In Help Join The Motley Fool
Free Article Join Over 1 Million Premium Members And Get More In-Depth Stock Guidance and Research
By Rich Smith - Jan 25, 2021 at 8:40AM

143 satellites launch on a single rocket -- and at rock bottom prices.

On Sunday at 10:01 a.m. EST, SpaceX launched another 10 Starlink satellites into orbit, making the company's globe-spanning "internet broadband from space" satellite constellation the largest one in orbit by a factor of five.

And that's the least significant bit of today's news.

Adding Starlink satellites to orbit, you see, was only a small part of Sunday's mission. The larger part was reducing the cost of putting satellites in space -- dramatically -- with the first successful demonstration of SpaceX's Smallsat Rideshare Program ... and setting a new record for most satellites put in orbit by a single rocket. 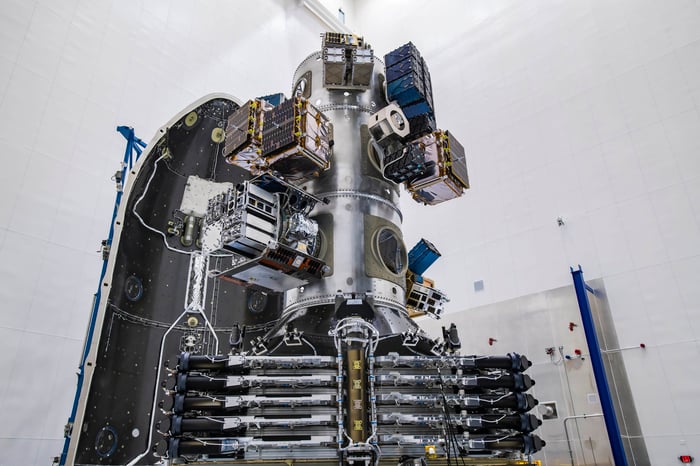 All aboard the Smallsat Express!

In addition to SpaceX's own 10 Starlink satellites, Sunday's manifest included:

And that's just a partial list. In total, Transporter-1 carried 143 satellites to orbit, eclipsing the old record for total number of satellites carried on a single launch set by India's PSLV back in 2017. (PSLV had carried 104 satellites).

First announced in the summer of 2019, SpaceX's smallsat rideshare program promised to run annual "regularly scheduled, dedicated Falcon 9 rideshare missions" to space for satellites massing "up to 150 kg" at prices "as low as $2.25 million per mission."

Just one month after announcing the rideshare program, SpaceX lowered its pricing, promising to charge just $1 million to launch a 200 kg payload, and expanded the idea beyond the original "SmallSat Express" concept. In addition to annual dedicated missions, SpaceX now also hosts rideshare satellites aboard its much more frequent Starlink launches. These "Starlink rideshares," however, don't come near the scale of Transporter-1, which seems to have vacuumed up a lot of the demand for small satellite launches all around the globe.

Think about it. 133 non-SpaceX satellites. Probably 2,500 kilograms worth of non-SpaceX payload.

This single launch put more hardware in orbit than eight fully loaded Rocket Lab Electron rockets could manage (launching with a 300 kg payload). Virgin Orbit, which completed its first successful orbital rocket launch last weekend, would have to launch four more times, at 500 kg each, to match the amount of non-SpaceX hardware that went up on Transporter-1. And even so, half of Transporter-1's payload was taken up by Starlink satellites.

Theoretically, at least, the next Transporter mission (scheduled for Q1 2022) could do the work of 10 Virgin Orbit rockets, or 16 Rocket Lab Electrons.

What it means for IPO investors

It gets an investor to thinking: For years, we've been watching Rocket Lab grow and wondering when it might IPO. Around Virgin Orbit as well, rumors have been swirling that Sir Richard Branson might use his new space SPAC, VG Acquisition Corp (NYSE: VGAC), to take Virgin Orbit public in a reverse merger IPO.

SPACs have proven very popular with space investors, after all. That's how Virgin Orbit's sister company, Virgin Galactic (SPCE 5.72%) became a publicly traded company after all! But when you see SpaceX hoovering up small satellite launch contracts to fill out just one single Transporter-1 mission, and charging a $1 million price of admission that's so much less than the $6 million Rocket Lab requires for a launch, or the $12 million it costs for a Virgin Orbit mission, you have to wonder: Is there going to be enough business left over to keep these smaller companies alive for long?

Granted, so far Rocket Lab, at least, seems to be doing fine. Even with the prospect of the Transporter-1 launch looming over it, Rocket Lab had no trouble finding a buyer for its 18th successful rocket launch. And Virgin Orbit, too, is forging ahead with its plans to compete for a slice of the small satellite launch market.

At the very least, though, it seems that SpaceX's Transporter missions will put a ceiling on how fast smaller space launch companies can grow. Every time a Transporter launches, it will remove about $48 million-worth (eight launches times $6 million each) of potential Rocket Lab business and reduce Virgin Orbit's total addressable market by $60 million (five launches times $12 million).

If you're waiting around for either of these companies to IPO, it's something worth considering.

Got $5,000? 2 Microchip Stocks You Need in Your Portfolio