UPS Freight goes up for sale as part of UPS CEO's strategy to unlock more value for shareholders.

UPS (UPS 1.96%) has agreed to sell its freight division to TFI International (TFII 1.70%) for $800 million by the second quarter of 2021. While investors in both companies cheered the development, TFI International stock reacted more strongly and was up double-digit percentages at the time of this writing, signaling thumbs up from shareholders of the Canada-based transport and logistics company.

For UPS, it's the first big move ever since CEO Carol Tome revealed her intentions to streamline the company after she took the helm in June 2020.

UPS operates three broad segments: U.S. domestic package, international package, and supply chain and freight. UPS Freight is part of the supple chain and freight segment, which also includes forwarding and logistics. UPS Freight, which offers regional, inter-regional, and less-than-truckload services, generated $3.3 billion in revenue in 2019. It accounted for around 4.4% of UPS's total revenue in the year. 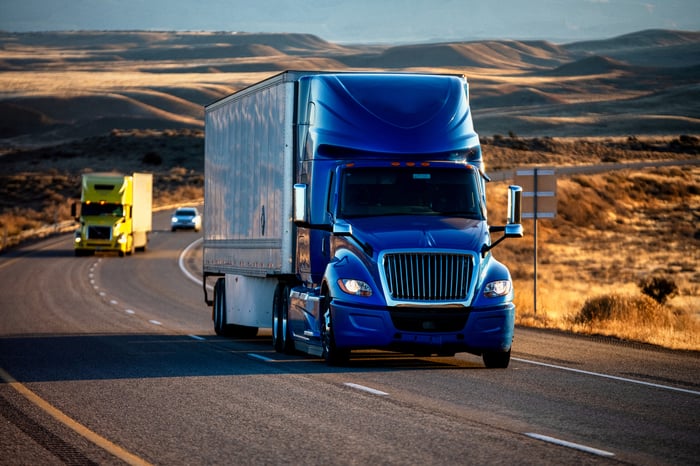 The move to sell UPS Freight aligns with "the company's 'better not bigger' strategic positioning," said the press release. In other words, it's in line with what Tome said during UPS's second-quarter earnings conference call held in July 2020: "We will have a laser focus on creating value for our shareowners, with the goal of increasing the rates of return on the capital we invest. It's all about becoming better, not bigger."

It appears to be a good move if UPS Freight's recent operational performance is anything to go by. Consider that through the nine months ended September 2020, UPS Freight revenue declined 5.1% year over year even as forwarding and logistics reported 11.7% and 14% growth in revenue, respectively.

Financial impact on UPS and TFI

UPS Freight fits well with TFI's aggressive efforts to expand in North America. It's also a debt-free deal and should add 197 facilities with roughly 6 million square feet of floor space to TFI's portfolio. As UPS Freight was close to break even on an operating profit basis, TFI expects the deal to be accretive to its earnings in 2021.

UPS, however, could incur a pre-tax impairment charge of $500 million on the sale, which should reflect in its full-year 2020 numbers. Eventually, UPS expects the divestment to boost its overall operating margin and help it pare down debt.