The CEO of Shift4 Payments will captain this orbital flight.

In 2008, SpaceX made history when it became the first private company -- i.e., not a national government -- to build and launch its own orbital-class rocket into space. Thirteen years later, SpaceX will make history again this year, when it launches its Inspiration4 mission.

As announced in a teleconference with the media Monday afternoon, SpaceX has contracted with Shift4 Payments (FOUR -6.39%) CEO Jared Isaacman to run a space tourism / philanthropic mission in Q4, carrying an all-civilian crew. Isaacman himself, an accomplished airplane pilot and co-founder of "the world's largest private air force, Draken International," will captain Inspiration's Crew Dragon spacecraft. Also aboard will be two passengers chosen by St. Jude Children's Research Hospital, and a fourth passenger yet to be named. 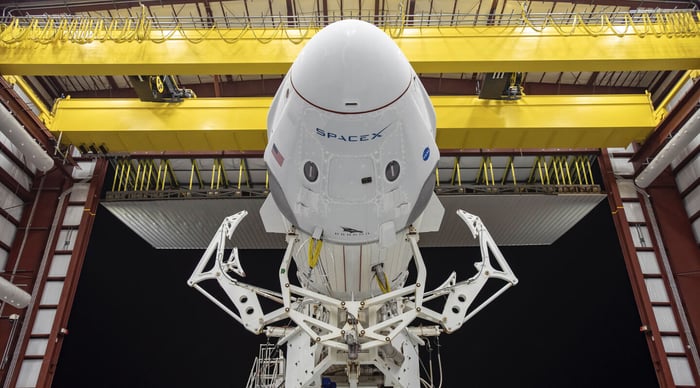 That sounds incongruous. Allow me to explain.

Isaacman is utilizing this mission, and a bought-and-paid-for television advertisement in support of it for this coming Sunday's football game, to promote St. Jude and its mission of treating pediatric cancer. In addition to paying for the space launch itself, and inviting aboard one frontline healthcare worker from the hospital, Isaacson will donate $100 million himself, encourage co-sponsors to donate a further $100 million (or more) to support St' Jude's planned "multi-billion dollar expansion," and permit St. Jude's to choose one of those donors to take its second seat.

Simultaneously, Isaacman will promote his own business. The fourth mission seat will go to a "deserving entrepreneur who utilizes the new Shift4Shop eCommerce platform," and he's holding an online contest to pick that lucky winner. All four passengers will then embark upon a two- to four-day trip orbiting the Earth, with departure scheduled for Q4 2021.