Please ensure Javascript is enabled for purposes of website accessibility
Log In Help Join The Motley Fool
Free Article Join Over 1 Million Premium Members And Get More In-Depth Stock Guidance and Research
By Rekha Khandelwal - Feb 3, 2021 at 8:05AM

These three dividend stocks can continue their fat payouts, no matter where oil and gas prices head.

The global oil and gas demand is recovering after falling steeply due to the pandemic. However, the recovery is slow and uneven. With the vaccine rollout, the demand for liquid fuels should rise. Still, it may not rise to the pre-pandemic levels of 2019, according to the U.S. Energy Information Administration.

Similarly, natural gas demand from the power sector -- the largest natural gas consumer -- is expected to fall this year due to higher gas prices and increasing generation from renewables. With the slow and uncertain pace of oil and gas demand recovery, it makes sense to stick to the best of breed stocks in the energy sector. Here are three such stocks that offer attractive and sustainable dividend yields while you wait for the sector to recover.

Oil giant Chevron (CVX 1.20%) easily stands out among its peers for its strong balance sheet, which gives it a clear edge when the energy market environment is challenging. 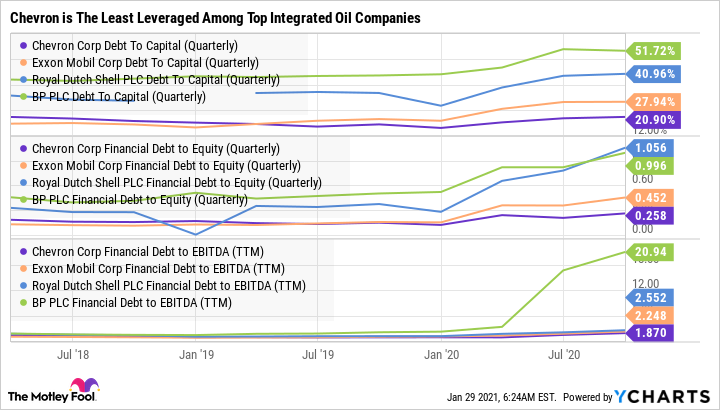 In periods of low oil and gas demand, and volatile prices, Chevron can reduce its spending on new projects to save funds. In response to the decreased demand, Chevron slashed its 2020 capital spending by more than 30% from its original guidance for the year. It is also trying to minimize its operating costs. So, the company has some levers to pull before it is forced to reassess dividends when earnings dwindle.

By comparison, BP (BP -0.25%) and Royal Dutch Shell (RDS.A) (RDS.B) had to slash their payouts last year due to their massive debt loads. Chevron has increased its dividends for 32 years in a row. Though not guaranteed, the company is best placed among its peers to continue its dividend payments. An improvement in oil markets should help it to grow its payouts in future. All in all, at a yield of 5.8%, Chevron is a great stock to add to your dividend portfolio this month. 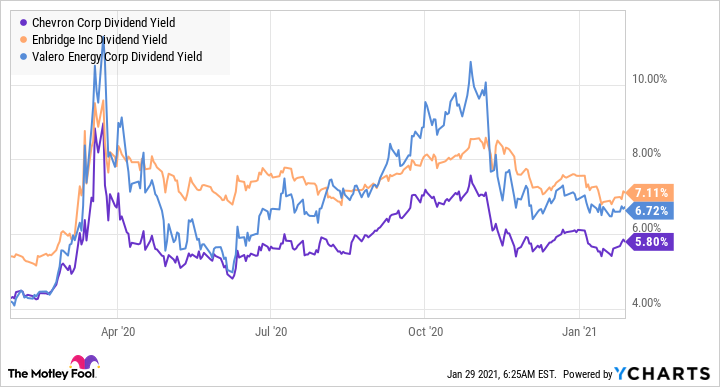 Canadian energy company Enbridge (ENB 0.95%) is primarily involved in the transportation and storage of oil, gas, and refined products. The company's gas transmission and distribution operations are largely regulated, providing relative stability to its earnings. That's one reason why Enbridge expects to meet its 2020 distributable cash flow (DCF) guidance, despite the effectsd of COVID-19 on its operations.

Enbridge is working on several growth projects that should help fuel its earnings growth. In the next three years, Enbridge plans to complete projects worth 10 billion Canadian dollars. Its completed and ongoing projects give the company the confidence to be able to raise its per share DCF by 5% to 7% through 2023.

Enbridge has a dividend growth streak of 26 years and the stock currently offers an attractive yield of more than 7%. The company's stable cash flows, projects pipeline, and dividend track record make its stock appealing. 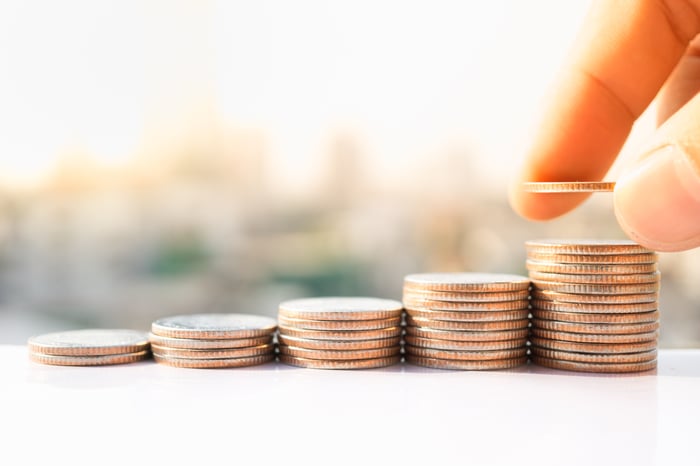 Low-carbon fuel policies on the lines of California are being considered by several states and countries. That's expected to drive the demand for renewable diesel, benefiting Valero. In short, Valero's 6.7% yield looks to be on a pretty sustainable footing.