Please ensure Javascript is enabled for purposes of website accessibility
Log In Help Join The Motley Fool
Free Article Join Over 1 Million Premium Members And Get More In-Depth Stock Guidance and Research
By Selena Maranjian - Feb 4, 2021 at 8:37AM

There's a lot to love about dividends. If you're invested in healthy and growing dividend-paying stocks, you can look forward to seeing their stock prices appreciate over time -- while collecting regular cash payments, too. Better still, healthy and growing companies tend to increase their payouts over time, so that stream of cash has a good chance of at least keeping up with inflation.

Here are three dividend-paying stocks to consider for your portfolio. 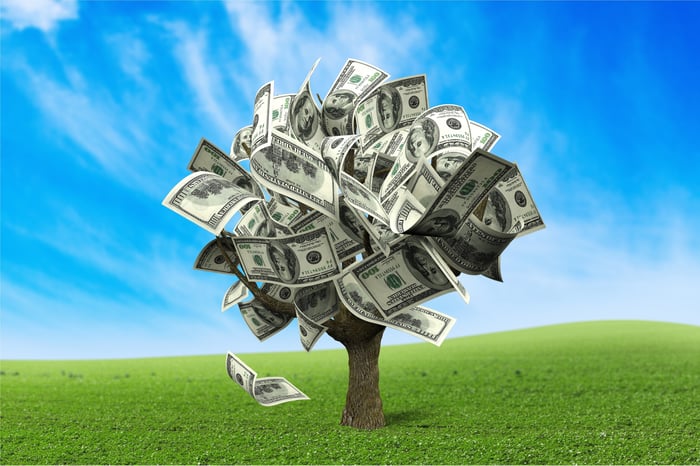 If you think Altria (MO 2.09%) is an unfamiliar company, you're probably wrong -- because it used to go by the moniker Philip Morris. (It changed its name to Altria and then spun off its international business into Philip Morris International (PM 1.80%).) Today, it's a top global tobacco company, overseeing major cigarette brands such as Marlboro, Benson & Hedges, Chesterfield, L&M, Lark, Merit, Parliament, and Virginia Slims. Marlboro is the top brand by far, and altogether, the company's brands enjoy a market share of roughly 50%.

It's fair to worry about Altria's future, as the number of smokers in America has been shrinking, and rising taxes and regulations have led to steep pricing in some locations. The company has been branching out and developing new revenue sources, though, such as the Ste. Michelle Wine Estates and an investment company investing in businesses such as aircraft, power plants, and real estate.

Altria owns about 10% of the world's largest brewer, Anheuser Busch (BUD 2.37%), too. It's also been investing in smokeless tobacco and e-vapor businesses such as JUUL and in the Canadian marijuana company Cronos. Whether all of these efforts will be enough to keep Altria in the green for decades remains to be seen, and is a reason some are staying away.

A reason to buy, though, is its dividend, which was recently yielding a whopping 8.4%. Even if that ends up halved, it would be a 4.2% payout. Dig a little deeper into Altria and see what you think about its prospects. (Note that there has been some talk that it might reunite with Philip Morris International, which would bring in the possibility of faster international growth. The latest news is that it won't, but never say never. Still, making investment decisions based on rumors isn't advisable.)

W. P. Carey (WPC 0.99%) is a real estate investment trust (REIT) -- a company that owns a lot of real estate and gets to bypass corporate taxes -- as long as pays out at least 90% of its earnings in dividends to shareholders. Every REIT has a different portfolio mix, often focusing on a kind of property such as medical buildings, industrial sites, shopping centers, apartment buildings, or data centers. W. P. Carey's portfolio features a mix of those, offering diversification. Here's how it recently looked:

The company is sizable, with a market value recently near $12 billion. It recently boasted 1,215 properties in the U.S. and Europe, covering a total of 142 million square feet, with a 98.9% occupancy rate. Its 350-plus tenants pay a total rent of $1.2 billion -- and those rents generally increase over time. This is an impressive business.

One advantage for W. P. Carey is that it's a "net-lease" REIT, owning single-tenant properties, with tenants responsible for most of the operating costs of the properties they occupy. That takes some risk off W. P. Carey's plate. On top of that, W. P. Carey likes to buy properties directly via sale-leaseback transactions, where companies that are looking to raise cash sell properties that they still want to occupy.

W. P. Carey's dividend recently yielded 6.2%, which offers a hefty income stream for investors. If you'd like to add real estate exposure to your portfolio without taking out any mortgages, consider a REIT such as W. P. Carey.

Bank of America (BAC 0.72%) is a big bank, with about 4,300 retail centers serving about 66 million consumer and small-business customers. Like most businesses, it has been challenged by the pandemic, with total revenue for 2020 down 6% from 2019 levels.

But vaccines are being administered, and the global economy is likely to start recovering, with more businesses taking out loans and making deposits, and consumers doing the same. That should be good for Bank of America in 2021. The pandemic actually helped the bank's business, in some ways. For example, its customers accessed services digitally more than ever, and digital connections cost less than in-person or over-the-phone ones. A recent press release reported:

Last year, 84% of deposits were made through the company's automated channels (mobile, online and ATMs), up from 78% the prior year. Digital sales accounted for 42% of total consumer sales last year, up from 30% in 2019. Furthermore, 68% of consumer mortgage sales and 74% of direct auto sales were made digitally, compared to 36% and 60% respectively in 2019.

Bank of America recently yielded 2.4%, which might not seem so impressive after the yields above. But over the past five years, it has hiked that payout by an annual average of 29%. Moreover, its payout ratio -- the portion of its income paid out as dividends -- was recently just 39%, reflecting a lot of room for further growth. In addition, the bank may reward shareholders via share buybacks.

These are just three of many terrific companies out there that can help support you in retirement, through stock-price appreciation and growing dividend income as well. A little sleuthing online will turn up plenty of additional candidates.