Please ensure Javascript is enabled for purposes of website accessibility
Log In Help Join The Motley Fool
Free Article Join Over 1 Million Premium Members And Get More In-Depth Stock Guidance and Research
By Neha Chamaria - Updated Feb 4, 2021 at 8:54AM

More and more investors are betting on the future of renewable energy, and this stock.

Shares of Clean Energy Fuels (CLNE -1.80%) popped 30.2% in the month of January, according to data provided by S&P Global Market Intelligence. The stock isn't done rallying just yet: It has already gained an eye-popping 25.4% so far this month, as of the time of this writing.

First things first: There wasn't a single press release or news specific to Clean Energy Fuels that came out in January. The stock, undeniably, rode the wave of enthusiasm around renewable energy, with December 2020 providing the first spark and developments in January adding fuel to the fire.

Congress' December stimulus package also provided for an extension of the alternative fuels tax credit through 2021, which supports the use of renewable natural gas (RNG), a biogas that can be used as a transportation fuel in natural-gas vehicles. Clean Energy sells RNG through its brand name, Redeem, and is expected to benefit substantially from the subsidy. In its last quarterly earnings release, CEO Andrew Littlefair called RNG "a shining star" for the company. 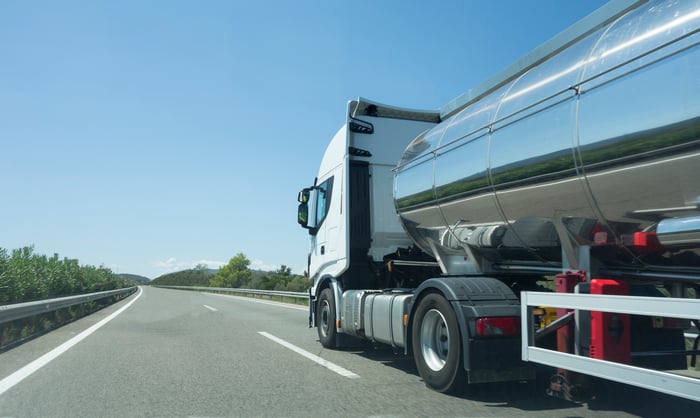 Clean Energy stock got another shot arm in the arm when Congress finalized then President-elect Joe Biden's victory on Jan. 6. Biden has been a strong advocate of clean energy and says he wants to create millions of jobs in the industry. As one of the leading providers of clean fuels for commercial transport, Clean Energy Fuels should be a surefire beneficiary under the Biden administration.

Later in the month, a rally in the price of natural gas furthered investor optimism, as higher prices improve the fuel's price advantage over diesel and gasoline, spurring hopes of higher demand.

Given the backdrop, Wall Street is turning increasingly bullish about Clean Energy Fuels. On Feb. 3, Credit Suisse gave the stock an outperform rating with a $17 price target, sending Clean Energy shares up double digits. Analysts at Credit Suisse are betting on Clean Energy's growing clout in RNG, powered up by its joint ventures with oil majors like BP. Clean Energy has an RNG marketing program with BP, and announced plans to develop RNG facilities at agricultural sites in collaboration with BP in December.

There's no denying that Clean Energy Fuels will benefit if Biden's clean energy vision takes concrete shape. The thing is, only time will tell whether and when that will happen. Meanwhile, Clean Energy Fuels stock has already jumped more than fivefold in just the past three months, which is something investors may want to be wary of.