Please ensure Javascript is enabled for purposes of website accessibility
Log In Help Join The Motley Fool
Free Article Join Over 1 Million Premium Members And Get More In-Depth Stock Guidance and Research
By Keith Speights - Feb 10, 2021 at 6:00AM

The hospital operator delivered another strong performance despite facing headwinds related to the COVID-19 pandemic.

Many hospitals have been slammed by the COVID-19 pandemic, but that hasn't stopped major hospital operator Tenet Healthcare (THC 1.03%) from delivering a sizzling gain of more than 65% over the last 12 months.

Tenet announced its fourth-quarter results after the market closed on Tuesday. You can probably count on the healthcare stock keeping its momentum going. Here are the highlights from Tenet's Q4 update. 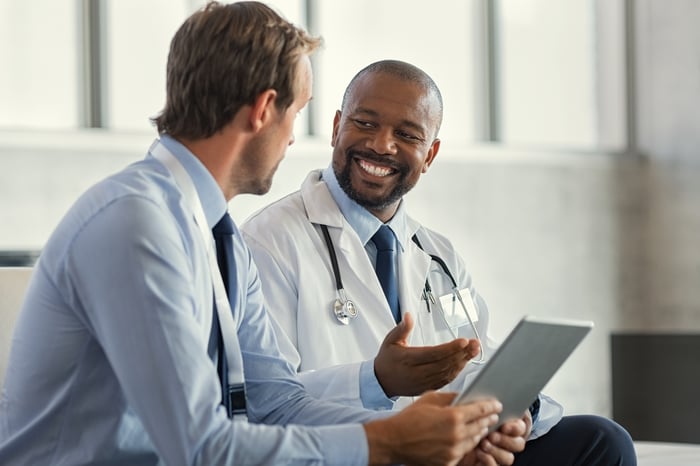 Tenet announced Q4 revenue of $4.91 billion, a 2% increase from the $4.81 billion reported in the same quarter of the previous year. The company's reported revenue was slightly higher than the Wall Street consensus revenue estimate of $4.89 billion.

The healthcare company reported net income in the fourth quarter of $414 million, or $3.86 per share, based on generally accepted accounting principles (GAAP). This reflected a significant improvement compared to the GAAP net loss of $3 million, or $0.03 per share, posted in the prior-year period.

Tenet recorded adjusted net income of $4.72 per share in the fourth quarter, compared to $0.95 per share, in the same period in 2019. This trounced the average analyst estimate for adjusted earnings of $1.70 per share.

Most of Tenet's revenue stems from its hospital segment. In the fourth quarter, this unit generated revenue of nearly $4.1 billion, up 2.1% year over year. Although Tenet's patient volumes were lower due to the pandemic, the patients it admitted had a higher acuity level overall. The company also benefited from negotiated rate increases.

Another factor behind the segment's higher revenue was Tenet's acquisition of 45 ambulatory surgical centers from SurgCenter Development (SCD). The SCD transaction was completed in December 2020.

The company's Conifer business segment, which provides services to a wide range of healthcare organizations, doesn't impact its overall results all that much. In the fourth quarter, Conifer's revenue totaled $344 million, up 3.6% year over year. This growth primarily stemmed from $9 million received after a client's bankruptcy.

Tenet announced plans to pay down $478 million of its senior unsecured notes due in 2025. The company also continues to seek to spin off its Conifer business, a move that would give the company additional cash to reduce its debt.

Why Tenet Healthcare Skyrocketed on Thursday