Please ensure Javascript is enabled for purposes of website accessibility
Log In Help Join The Motley Fool
Free Article Join Over 1 Million Premium Members And Get More In-Depth Stock Guidance and Research
By Adam Levy - Feb 16, 2021 at 10:30AM

Video consumption will remain elevated even after the economy reopens, but some things will change.

It's no surprise Americans spent more time watching TV and streaming video in 2020. With ongoing health restrictions, there wasn't much else to do besides stay in and watch television. Add to that a slew of new streaming services, and it's easy to see why total video consumption increased by around 30 minutes per day for the average U.S. adult, according to eMarketer.

But consumption won't return to normal quickly, and when it does, our habits may be very different than pre-COVID. 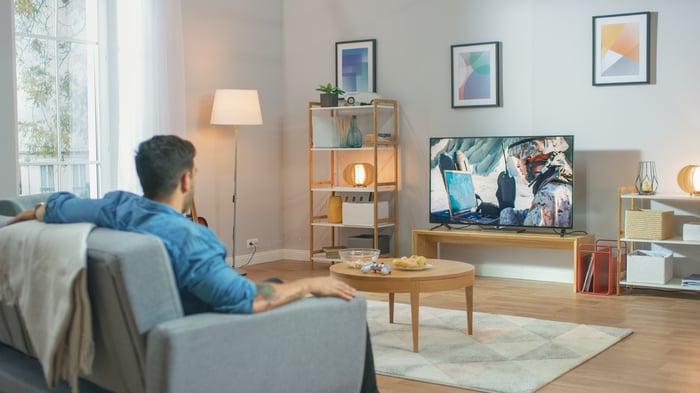 The average American watched 5 hours and 47 minutes of TV or digital video per day last year. That's a stark increase from 2019's 5 hours and 13 minutes. The combined total has held steady around that number since 2013, eMarketer's analysts say.

It's widely expected that TV time will decline as the economy reopens and people are allowed to go out more freely to restaurants, bars, and theaters, and partake in other out-of-the-home entertainment. Still, 2021 will see average video consumption remain elevated at around 5 hours and 38 minutes per person per day. And 2022 will still be higher than the seven years prior to the pandemic, at 5 hours and 31 minutes per person per day.

There are a few factors that could be leading to this behavior. More people could work from home even after the vaccine is widespread. That cuts out a commute and potentially leaves more time for video entertainment. A second factor may be consumption on smartphones, which are seemingly always with us.

Another important consideration in our video consumption habits is the shift from cable TV to digital.

Cord-cutting accelerated in 2020 as sports leagues postponed their seasons and sitcoms and dramas ended early. Those who stuck around watched more than enough television to make up for the cord-cutters, and the average U.S. adult watched more TV last year than in 2019. But 2021 will see traditional TV consumption fall below 2019 levels, and continue to sink lower throughout the decade.

Indeed, cord-cutting is likely to continue accelerating in 2021. Many pay-TV providers have shifted their focus from video service to home internet, wireless, and other more profitable services. Video is used as a means to retain internet subscribers, but companies like Comcast (CMCSA -0.63%) and AT&T (T 1.74%) have opted to offer streaming content and devices to subscribers instead of losing money on traditional video subscribers. eMarketer expects fewer than 75% of U.S. adults to watch any TV at all in 2022, down from 98.8% in 2011.

What these trends mean for investors

There are a couple big implications for investors in media stocks.

First, the shift from traditional TV to digital video will put downward pressure on companies with lots of exposure to cable networks, including Walt Disney (DIS -4.85%), AT&T's WarnerMedia, and Comcast's NBCUniversal. They should see continued subscriber losses, and many will see lower ad revenue as viewership declines. That could be offset by affiliate fee increases, as certain channels (ESPN, CNN, and others with strong live viewership and brand affinity) become more valuable pieces of the cable bundle.

Second, there's plenty of room for multiple streaming services. In 2019, the forthcoming influx of streaming competitors had Netflix (NFLX -4.96%) investors concerned about losing viewership to Disney+, HBO Max, or Peacock. In fact, consumers shifted their time from television to digital as streaming options improved.

Consumers streamed a sitcom's worth of content more per day in 2020 than they did in 2019. And streaming hours will only continue to increase in 2021 and 2022 as TV viewership declines.

The media companies with broad exposure to streaming and limited exposure to traditional TV, like Netflix, are much better positioned despite the influx of competition. Despite its large cable-network business, Disney has dramatically improved its position over the past year with the early success of Disney+ and its early decision to double down on streaming. The jury may still be out on AT&T and Comcast, but their diversified businesses, and shift away from video service as a main source of profits, put them on a strong footing -- as cord-cutting won't be slowing down anytime soon.