Please ensure Javascript is enabled for purposes of website accessibility
Log In Help Join The Motley Fool
Free Article Join Over 1 Million Premium Members And Get More In-Depth Stock Guidance and Research
By Dan Caplinger - Updated Feb 17, 2021 at 8:59AM

This could be the red-hot active ETF manager's least favorite company right now.

The universe of exchange-traded funds has grown into a multi-trillion dollar industry, with most of that money passively invested in various stock indexes. Lately, though, active ETF pioneer ARK Invest and its chief investment officer, Cathie Wood, have taken center-stage with amazing performance for the fund company's five top-performing ETFs.

ARK Invest just shared its latest report on its biggest and best investing ideas for 2021. The report included 15 different topics on which Wood and her fund company weighed in, ranging from electric vehicles and 3-D printing to next-generation gene therapy and digital wallets. It praised the business models that dozens of companies are following to early success.

Yet in the 112-page report, there was only one company that ARK Invest specifically called out as anything but successful. It's a well-known stock in a key industry, but in the report's words, it "seems frozen in time" and "seems to have lost its way." Below, we'll look at that stock and what its story means for its more promising competitors in this hot market area. 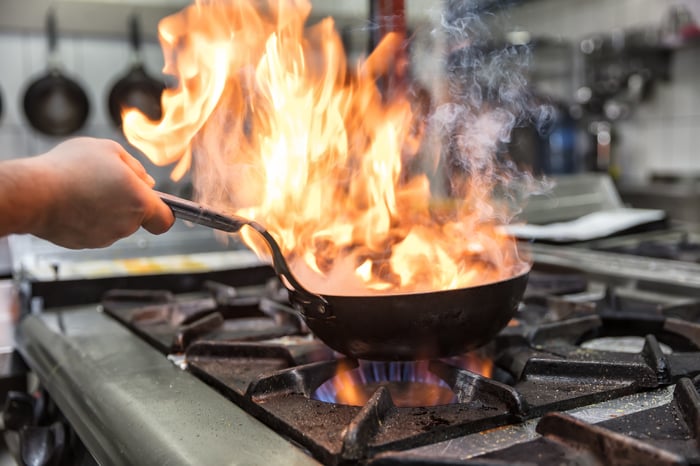 To be clear, there are several industries that ARK Invest indicated are in danger of being disrupted. Just as buggy-whip sellers lost their business when cars replaced horse-drawn carriages, major companies in these industries could see tough times ahead. They include:

But the one company the report mentioned by name was Intel (INTC 0.84%). In an era in which data centers have never been more important to innovation, the premier chipmaker and members of the Dow Jones Industrial Average (^DJI 1.98%) could lose the franchise that has made it a household name since the 1980s.

ARK Invest argues that data centers have had to reinvent themselves at regular intervals, largely in response to technological advances. The last major shift came in the 1990s, when Intel took the knowledge it had gained in developing PC microprocessors and applied it to data center. The transition took time, but over the past 20 years, Intel supplanted legacy data center players to take commanding market share above 90% by 2020.

Now, though, Intel has run into massive operational challenges. After years of being on the cutting edge of technology in the semiconductor  area, Intel has recently delayed production of 10-nanometer processor chips. Meanwhile, other companies, such as Advanced Micro Devices (AMD 1.68%) and Taiwan Semiconductor Manufacturing (TSM 0.79%), have produced 7-nanometer and even 5-nanometer chips.

Going forward, ARK Invest believes that Intel-architecture chips will give way to ARM-based processors, potentially grabbing 80% of the market within the next decade. With cloud-services giant Amazon.com (AMZN -0.03%) having launched an ARM-based processor last year, Intel's technology could be in the same place now that mainframe computers occupied when Intel was in its heyday.

For its part, Intel is still confident in its ability to catch up and remain a leader in the semiconductor space. Incoming CEO Pat Gelsinger believes that Intel will still be able to produce cutting-edge chips in-house rather than having to turn to third-party foundries.

It's notable, however, that Wood and ARK Invest chose to spend as much time as it did in its report on why Intel's fortunes appear to have turned for the worse. It stands as a lesson that even top blue-chip companies aren't invulnerable to disruption. Moreover, it will have investors watching closely to see if AMD, Taiwan Semi, and Amazon continue to make progress in the data server space at Intel's expense in the years ahead.

Do Earnings Matter Anymore? Microsoft and Intel Investors Say No